Men’s Basketball: Wildcats blow out High Point in 95-60 victory despite close first half 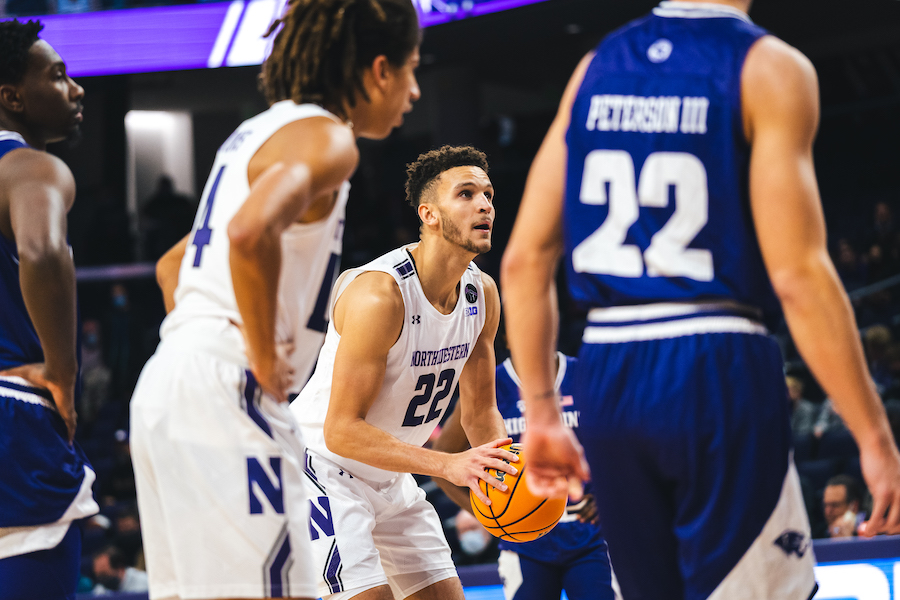 Senior forward Pete Nance lines up for a free throw against High Point. Nance registered 22 points in the Wildcats’ 95-60 victory on Friday.

Northwestern found themselves on alert for an upset Friday after getting off to its first slow start of the year against High Point of the Big South Conference.

The Wildcats (2-0, 0-0 Big Ten) left the court at halftime up 34-33 over High Point (1-1). The slim lead was very nearly a deficit, avoided only by a late offensive push by junior guard Boo Buie and senior guard Ryan Greer. NU was down by as many as nine points in the first half, despite High Point’s 12 fouls that resulted in 10 successful Cats free throws before halftime.

NU came back from the break looking like a new team. Senior forward Pete Nance, whose only first-half points came from two free throws, quickly answered High Point’s second-half opening layup with a 3-pointer. From there, the highlight reel of Nance and company only expanded.

Nance and Young headlined the Cats’ 95-60 victory, both registering at least 20 points with Young shooting an impressive 8-for-8 from the field and 4-for-4 from the free-throw line. The team’s “two-headed monster,” as coined by coach Chris Collins, more than compensated for the loss of last season’s leading scorer, injured junior guard Chase Audige.

Nance’s low-scoring efforts in the first half came partially as a result of his reduced playing time, with the forward only seeing nine minutes of action on the court. He registered two personal fouls early on and struggled to find rhythm after having to sit a majority of the first half.

“Everybody was just telling me to stay in the game,” Nance said. “I was trying to stay active on the bench, and then luckily in the second half I got it going a little bit thanks to my teammates finding me in my spot.”

NU was also able to slow down High Point’s leading scorer, guard John-Michael Wright, throughout the second half.

Wright, who was named to the Big South Preseason First Team in October, put up 23 points against the Cats — 14 of which came in the first half. Wright was held to a mere 2-for-7 from the field in the second half, though Collins later praised the gameplay of Wright and High Point, citing their quickness to the ball, physicality and attack.

“They came out and kind of imposed their will early on us,” Collins said. “They got us in foul trouble. But I was really proud because I thought our guys never really got rattled by it.”

Collins attributed NU’s comeback to the team’s cool demeanor and refusal to become rattled by the early deficit, a skill he said the players have learned as they have gotten older.

The Cats have not finished the year with a winning record since the 2016-17 season, the campaign that led NU to its first-ever NCAA Tournament appearance and win. Collins said he believes the team is talented enough to be in a competitive position by the end of the season.

“If we want to be a team at the end of the year that is in the mix for things … we have to have a sense of urgency right now,” Collins said. “You have to be ready to play these games in November so that when you get to the Big Ten, you’re still playing games that matter.”