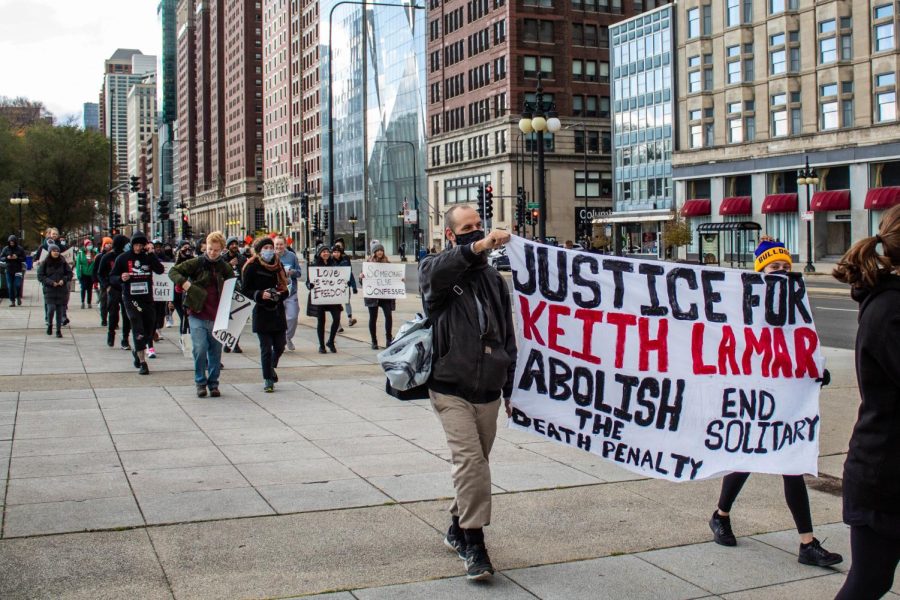 Following Friday's NPEP event, supporters walked up Michigan Avenue in solidarity with Keith LaMar, a death row prisoner in the state of Ohio.

The weekend kicked off with a Friday panel and jazz performance at the Wirtz Center, followed by a Saturday rally and march at Millennium Park and a second jazz concert. The events marked the second time NPEP has worked with the Justice for Keith LaMar campaign, following his virtual address to the NU community in January.

Activist and jazz saxophonist Salim Washington spoke and performed at the Friday event. Washington said LaMar’s experience is evidence that the carceral system must be abolished, pointing to how American policing originated from systems to keep enslaved people on plantations.

“If a few people commit a technical crime, you can say this is a moral lapse, but if an entire community commits this technical crime, it’s not a question of morality,” Washington said. “It’s a sociological issue.”

LaMar was charged with murder and sentenced when he was 19 years old, after a gunfire exchange with intruders in his home. At the time, he had been dealing drugs as a means of survival.

After LaMar served four years, a riot broke out in the prison during which several people died. State investigators accused him of murder, though he denied the charges. Evidence proving his innocence was withheld from the all-white jury that sentenced LaMar to execution in Nov. 2023, according to the campaign.

LaMar called into the Friday night event through speakerphone. Every few minutes, he was interrupted by an automated message saying, “This call is originating from an Ohio Correctional Facility and may be recorded and monitored.”

He encouraged the attendees to recognize the fight for justice extends beyond overturning his own execution.

“We have to wake up, we have to stand up, we have to get engaged,” LaMar said. “It’s not just about me … other young people who are beginning on this path, we have to intercept them. We have to do what we can to make sure this generation of people understand how to protect their souls.”

The following morning, about 40 people of all ages met in downtown Chicago for the second annual rally in solidarity with LaMar. Supporters met at Wrigley Square in Millennium Park before walking down and up Michigan Avenue with signs and banners that read “Solitary is torture” and “Someone else confessed.”

Before the march, LaMar called and addressed those who showed up to support him. During the call, he said it was almost a year since he had gone outside. The outdoor space he can visit in prison is no longer than 20 paces long, he said.

Organizer Jason Fulford also spoke before the walk. Fulford is a cousin of Eric Garner, a man killed by police in 2014, and he has been advocating for justice for LaMar for more than a year. Fulford said he believes the death penalty is inhumane and is fighting to get rid of it.

“I know that a big part of his fight is not just for him,” Fulford said. “This is for the future and for years to come, and something that will live a lot longer than him.”

The Saturday evening jazz performances at the Wirtz Center featured the Freedom First concert series, which began in Brooklyn and Manhattan in summer 2020 during protests in the wake of George Floyd’s murder. Along with Washington, jazz musicians from New York and Spain flew in to perform at the event.

Amy Gordiejew, the lead organizer of Justice for Keith LaMar, said the global reach of the weekend’s events is a testament to the campaign’s growth.

“This movement for Justice for Keith LaMar has been going on for years now,” Gordiejew said. “But it is just now we are seeing the fruit. We’re seeing people (internationally) caring enough to invite him into their experiences and sign the petition.”

UPEP events officer and Weinberg junior Flora Tian said the events were larger than anything the group has hosted before. Tian said she was encouraged by how involved undergraduate students were in planning the weekend.

Tian added she also appreciated how the event combined activism with music and community events like the run.

“For UPEP’s future, now that we’ve done such a big event, we are more confident about bringing more events like this,” Tian said. “Keith’s fight is ongoing — it really comes down to the right person getting to know his story.”

Correction: A previous version of this article misquoted a sign. The Daily regrets the error.