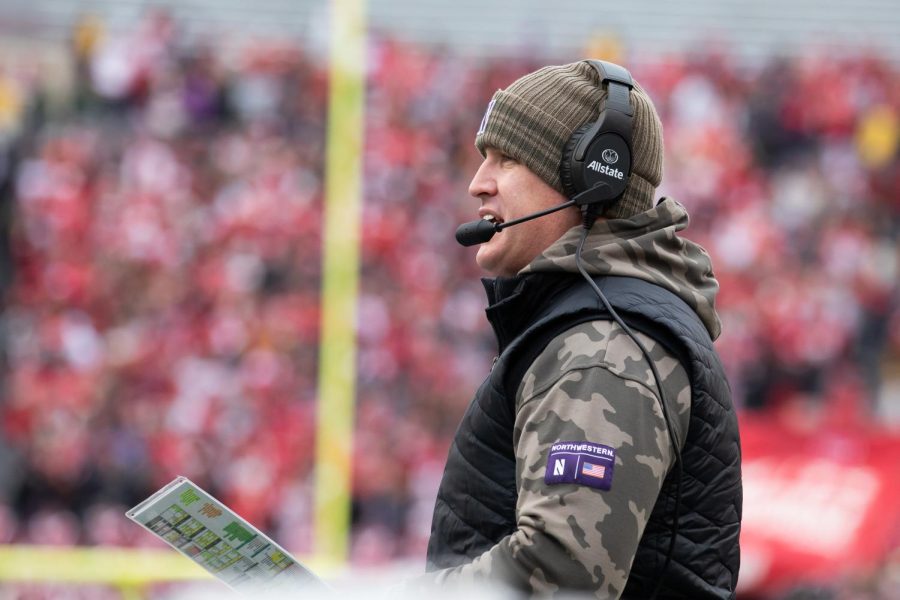 Pat Fitzgerald surveys the field. Northwestern dropped to 3-7 with its loss to No. 18 Wisconsin, its second seven-loss season in the past seven years.

MADISON, Wis. — The Wisconsin running back is a player and a phenomenon Northwestern, like the rest of the Big Ten, knows well. The list of stellar Badgers backs that have torched the Wildcats over the years reads loud and long: Jonathan Taylor. Corey Clement. Melvin Gordon. James White.

Add a new name to the register in Braelon Allen, who finished with 173 yards on 25 carries for three touchdowns, to go with a 16-yard catch on Wisconsin’s first scrimmage play. Alongside quarterback Graham Mertz, Allen helped the Badgers roll to a 35-7 win over NU in Madison Saturday afternoon.

“There are certain things that we didn’t realize early on in the game,” junior defensive back AJ Hampton said. “We saw [them] late in the game, and we gotta pick them up.”

From a historical perspective, shorter is the list of Wisconsin quarterbacks who have brought NU to its knees. Mertz, who completed just five passes against Purdue earlier this year, seemed an unlikely candidate to join it. But he torched the Cats for 216 yards and two touchdowns on 23 attempts, 18 of which he completed.

“[Mertz’s accuracy] wasn’t really a challenge,” Hampton said. “We just gotta work on some fundamentals. As a team, as a defense, we gotta work a little more on some matchups.”

After punting on its first series, Wisconsin immediately began testing the Cats’ defensive mettle a week after their strong performance against Iowa. Allen carried the ball four consecutive times for gains of 37, nine, eight and six yards; all four plays included missed tackles by NU. Brady Schipper gained two yards for a change of pace, and the Badgers went back to Allen for 24 on two plays. Allen then finished the job from two yards out two plays later.

For a time, the Cats appeared poised to match the Badgers on the offensive side of the ball. Beginning with senior quarterback Andrew Marty’s eight-yard pass to graduate student wide receiver Stephon Robinson Jr. on NU’s first scrimmage play, NU embarked on an 82-yard, 19-play voyage to the Wisconsin 10-yard line that ate seven minutes and 34 seconds. Marty’s second-and-goal fade, however, ended up in the arms of Badgers cornerback Caesar Williams.

“The turnovers were really costly,” coach Pat Fitzgerald said. “We got to take care of the football at the quarterback position. That’s part of the expectation of the position and we’re just not doing that clean enough right now.”

Marty completed 10 of his 18 passes for 100 yards and rushed for 16 yards on nine carries, 14 of which came on one first-quarter scramble. With 38 seconds left in the third quarter, Fitzgerald relieved Marty for sophomore Ryan Hilinski, who completed three of his eight passes for 25 yards. By the time Fitzgerald inserted Hilinski, the Cats were in a 35-0 hole.

“In the first half, we put our defense in a really tough spot,” Fitzgerald said. “We still had a chance to be in the game.”

Wisconsin buried NU with balance, getting two more touchdowns from Allen and two scores via the air from Mertz. The Badgers more than doubled the Cats’ rushing total, racking up 268 against NU’s 114. Wisconsin nearly pulled off the same feat in the passing game, with Mertz and backup Chase Wolf’s 229 yards easily outpacing Marty and Hilinski’s 125-yard effort.

“At times we can use tempo to keep the defense on its toes and keep them honest,” Robinson Jr. said. “But it depends on what type of gameplan we’re using.”