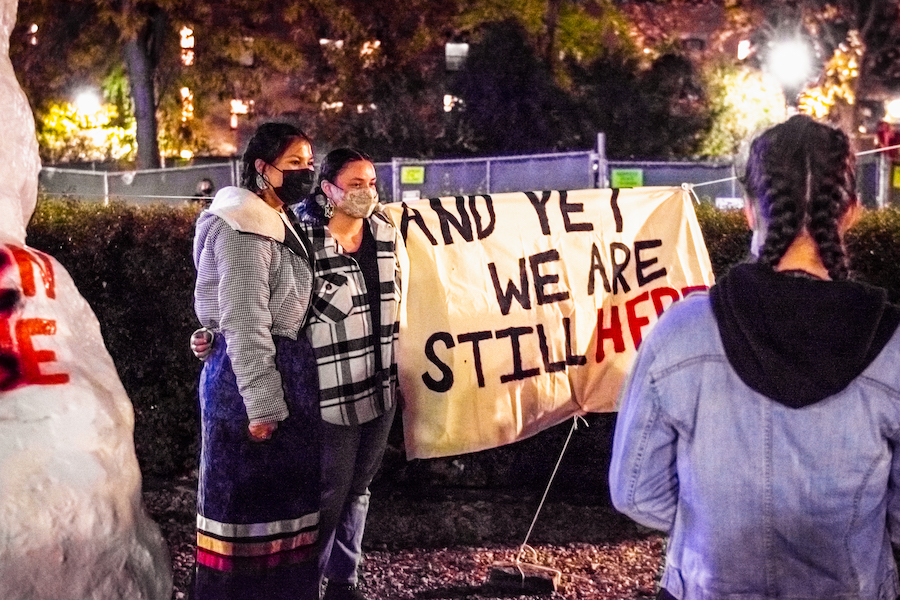 NAISA students led a reflection at The Rock Sunday night in response to the anti-Indigenous vandalism that defaced their painting for Native American Heritage Month. NAISA released a set of demands for the University Thursday.

Northwestern’s Native American and Indigenous Student Alliance released a set of demands to the University Thursday in response to recent anti-Indigenous hate at The Rock and the University’s reaction to the vandalism.

Vandals defaced The Rock — which NAISA had painted in celebration of Native American Heritage Month — with anti-Indigenous rhetoric on Nov. 6. NAISA released a statement on Nov. 7 recognizing the vandalism and giving support to the Indigenous community.

NU published a statement Nov. 8 about the vandalism in Leadership Notes, but the University did not send the statement to the entire community until Thursday. NU also painted over the vandalism the night of Nov. 8, according to University spokesperson Jeri Ward.

On Thursday, Provost Kathleen Hagerty sent a universitywide email acknowledging that the lack of communication harmed students, faculty and staff, with the Nov. 8 statement attached.

SESP junior and NAISA member Isabella Twocrow, who is Oglala Lakota and a member of the Ho-Chunk Nation, said it’s been painful to process the anti-Indigenous hate. The fact that she and other Indigenous students at NU have also had to take on the labor of organizing with, advocating for and extending support to the Indigenous community has added to that pain, she said.

“I want to know that (NU is) doing something that doesn’t involve Indigenous labor to fix what has happened and fix the harm that it has put on our community,” Twocrow said.

First, NAISA called on University President Morton Schapiro and Hagerty to issue an action plan to create a healthy and welcoming campus environment for Indigenous students, addressed to the entire NU community. NAISA also demanded the University find those responsible for the vandalism and hold them accountable through restorative justice practices not involving police.

Twocrow emphasized that some of NAISA’s demands — like the demand to establish a fully funded scholarship for Cheyenne and Arapaho descendants to attend NU — are long-standing. The call for a scholarship is in line with a recommendation made in a 2014 report from the Native American Outreach and Inclusion Task Force.

“That’s harmful to us to see that an ask of the community hasn’t been answered since 2014 — that’s before any of us were even in high school, at least for me, and that’s really hard to hear,” Twocrow said. “We’re asking for it again, which we shouldn’t have to.”

NAISA also called for the University to establish a Crisis Response Team to handle responses to bias incidents on campus, including anti-Indigeneity, anti-Blackness, xenophobia, racism and hate crimes.

SESP senior and NAISA member Isabel St. Arnold, who is a Keweenaw Bay Ojibwe, said she and Twocrow worked with the rest of NAISA and other community members throughout the week to write the demands.

“We take into account everyone’s opinions and try to give everyone space to voice what they want,” St. Arnold said.

In addition to requesting a response from Schapiro and Hagerty, NAISA also demanded an apology to parents and families of Indigenous students.

The vandalism occurred over Family Weekend, and many parents of Indigenous students, including Twocrow’s father, saw it.

“How are they supposed to leave knowing their Native students here are safe?” Twocrow said. “We had people saying, ‘Yeah, my mom saw that — I took them over to go see The Rock, and that (had) happened.’ That’s not okay.”

‘This affects our entire community forever’

Twocrow expressed concern specifically for the impact the anti-Indigenous hate has had on freshmen and prospective students.

Twocrow, who works for NU admissions, said the team decided to halt social media posts it had scheduled for Native American Heritage Month after the vandalism.

“For our first-years (and) for our prospective students, how are we supposed to tell them that this is a safe campus for them?” Twocrow said.

Twocrow also emphasized that the harm caused by the vandalism and the University’s response extends beyond those directly involved now.

“It doesn’t only affect our week, our month and our quarter — this affects our entire community forever,” Twocrow said. “We will remember this. It’s not something that’s going to be forgotten. And we will continue to hold Northwestern accountable.”

NAISA released a statement Thursday outlining why the University’s post in Leadership Notes was not enough. The organization said the post’s language is “dismissive” and said NU needs to list immediate steps it will take to support the Indigenous community.

The document also called attention to the fact that until Thursday, the University had not sent a universitywide email about the issue.

However, on Wednesday, administrators sent an email to the NU community emphasizing the University’s demonstration policy and condemning a Nov. 6 student protest in which students advocated for the abolition of University Police, among other changes.

“Your response (to the Nov. 6 protest) showed us that you took priority to condemn students peacefully advocating for protection from violence versus condemning actual violence happening on campus,” NAISA wrote in the statement.

In the University’s Thursday email, Hagerty said she recognized students, faculty and staff felt “hurt and angered” by the University’s lack of communication to the entire NU community about the anti-Indigenous vandalism.

The email stated that the University is “unequivocal” in its support of its Indigenous community and condemns the messages on The Rock.

“One of Northwestern’s central missions is for our community members to learn and grow, including me,” Hagerty wrote in the email. “I appreciate the feedback we received over the past several days.”

However, the Thursday email did not include an apology.

St. Arnold said both communications from the University — the statement posted in Leadership Notes and the Thursday email — felt “empty” and lacked tangible support, causing “more harm than good.”

“All (NU is) saying (to the Indigenous community) is, ‘Good job for being resilient and good job for putting all this labor on yourself,’ when we shouldn’t have had to do that,” St. Arnold said. “We should have had support from the University immediately.”

A call for community support

NU community members who are looking for ways to support the Indigenous community should send the demands to the Board of Trustees, president, provost and the chief diversity officer in their own words to pressure the University to act, St. Arnold said.

St. Arnold and Twocrow added allies to the Indigenous community can also show support by attending NAISA’s events, like the Nov. 19 Sand Creek Commemoration. The event will include a procession from the John Evans Alumni Center to the Center for Native American Indigenous Research House, followed by a community fire and reflection.

“We’re not asking for any money, donations, anything like that, we don’t want that,” Twocrow said. “What we want is people to show up to these events that are thoughtfully planned months in advance.”

While NU community members have reached out to NAISA to express support following the vandalism, Twocrow said very few people have attended Native American Heritage Month events. She said these events have been in the works for a full year, and they are extremely important to the Indigenous community.

“We recognize that not all Native American, Indigenous students on this campus … are a part of NAISA,” Twocrow said. “We want to make sure they know that we’re here to support them too.”

Correction: A previous version of this article misstated Isabella Twocrow’s tribal affiliation. The Daily is committed to serving the communities we cover and equipping staff to report and edit sensitively and accurately. The Daily regrets the error.