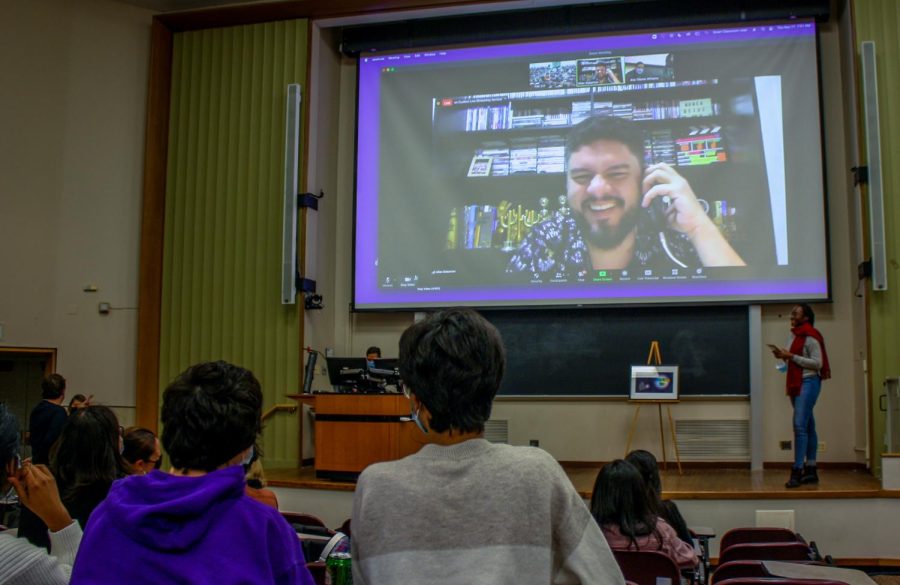 “Pacarette” director Allan Deberton answered questions via Zoom. The film was shown as part of a Brazilian film festival on Thursday evening.

The Mostra Film Festival came to Northwestern Thursday night, showing the film “Pacarette” to a student audience in Fisk Hall.

The screening of “Pacarette” was one of 26 films shown throughout the region as part of the festival, which is the largest Brazilian film festival in the Midwest. Organized by the nonprofit Partners of the Americas, the event is in its 12th year.

“The goal of the festival is to show Brazil in its totality,” said Ariani Friedl, founder of Mostra Film Festival. “Our films bring politics, history, environmental issues and even social issues.”

The movie focuses on Pacarette, an elderly woman living in the Brazilian town of Russas. She attempts to stage a ballet performance at her town’s 200th anniversary festival but town leadership repeatedly rebuffs her. The movie explores themes of ageism, loneliness and death.

“Portuguese is a less commonly taught language in our university, and we want to try to make more visibility for it,” Williams said.

She said she enjoyed the movie because of how passionate Pacarette was about bringing dance to others, even as those around her ostracized her for her passion.

SESP freshman Katherine Ferreira O’Connor, a Brazilian American, said they enjoyed being in an immersive space with their peers where they could hear both Portuguese and English.

“It was really nice to sit and watch a Brazilian film in an American context where I don’t feel like I need to be explaining things (about Brazilian culture),” Ferreira O’Connor said.

Following the screening, “Pacarette” director Allan Deberton joined via Zoom for a live Q&A session, speaking through a translator. He said the movie is based on his own experience growing up in Russas and hearing about an elderly dancer of the same name. The town’s public administration did not support the arts, and the real Pacarette was one of the only champions, he said.

Deberton saw many parallels between his story and Pacarette’s. As a young film director, he faced difficulty creating and funding art in Russas.

Today, however, Deberton feels the culture is changing. Despite Russas’ lack of a movie theatre, the film was shown in a public park in the town, with more than 3,000 attendees.

Despite this, Deberton said the difficulties in making art persist —  it took 10 years to develop and fund “Pacarette.” The opposition extends to politics as well. Deberton said the Brazilian government is censoring his films, including a documentary he recently produced about five transgender people in the northeast region of Brazil.

In closing the event, Debeterton said despite the difficulty he faced in making his films, he wants to continue spotlighting social issues.

“I don’t want to lose the ability of sending important messages about human beings and important aspects of life,” Deberton said.