Football: Riker: Northwestern’s defense must prove itself in homestretch 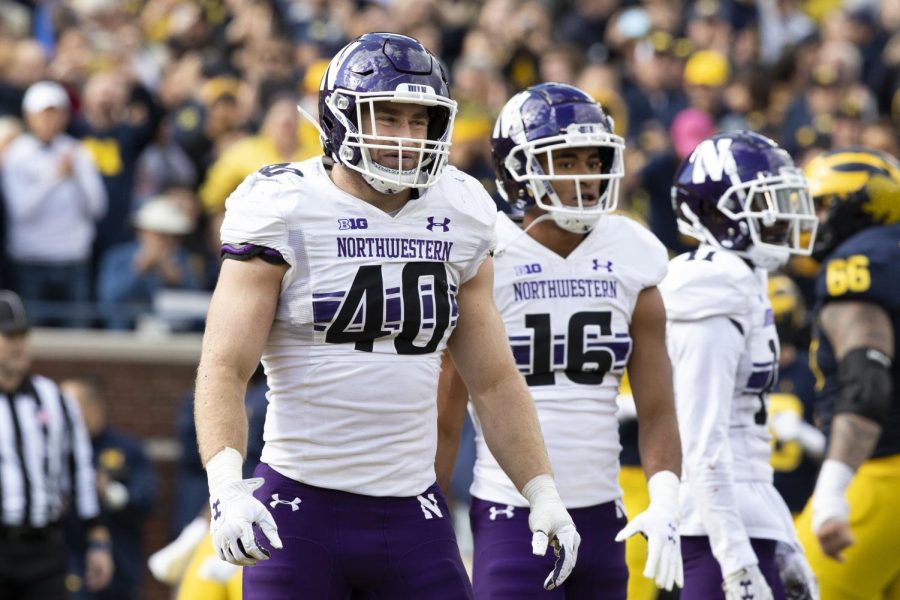 In the second half of Northwestern’s primetime contest against then-No. 22 Iowa, the Wildcats’ defense lived up to its reputation as a unit that can change games.

NU held the visiting Hawkeyes to just three points in the final 30 minutes, giving the Cats’ stagnant offense opportunities to rally for its first division win of 2021.

When the game seemed to be over after senior quarterback Andrew Marty’s second interception with eight minutes left and NU down 17-6, the unit came up clutch. The Cats’ defense held Iowa to a punt, then forced a three-and-out on the Hawkeyes’ next drive — one that only took up 24 seconds of regulation — to give Marty one last shot at the win.

This is the type of performance NU fans have been accustomed to seeing the past couple of seasons, but it’s one that has proved elusive in defensive coordinator Jim O’Neil’s first year in charge. It’s exactly the type of performance O’Neil and the rest of the team will need over the final three games to ensure the lasting image of this season isn’t the 75-yard touchdown burst by Michigan State running back Kenneth Walker III that opened the season.

The dysfunction of the Cats’ quarterback carousel has one silver lining: it’s taken the magnifying glass off a defense that took a step back from its 2020 form under previous coordinator Mike Hankwitz. And when NU completes its 2021 post-mortem, the offensive malaise may be credited as the primary reason for a losing season in Big Ten play.

But the Cats’ program is built around its defense, and whether due to the coaching change, the graduation of NFL talents or miscommunication, NU has not lived up to its standard on that side of the ball. Nebraska, which fired its offensive coordinator last week, lit the Cats’ defense up for seven rushing touchdowns in a 56-7 blowout, and NU’s first three games against Power Five opponents all started with gains of 50 or more yards by the opposing team.

The recent results haven’t been nearly as jarring, with the Cats holding Rutgers to seven points in their lone Big Ten win on Oct. 16 and keeping Iowa’s offense in check last week. Then again, Rutgers isn’t regarded as an offensive juggernaut, and the Hawkeyes’ offense has been in freefall in recent weeks. That was before Iowa sent in backup quarterback Alex Padilla, a second-team cornerback in spring practice, for most of its contest against NU.

With both performances like the second half against Iowa and playmakers like graduate student linebacker Chris Bergin and sophomore safety Brandon Joseph, the Cats have flashed the potential to be an elite unit. The homestretch offers O’Neil and his defense the opportunity to change the narrative and end the 2021 season with momentum, even if short of the Cats’ initially lofty goals for the season.

Wisconsin and Purdue, NU’s next two opponents, are legitimate Big Ten West contenders and in a four-way tie for the division lead. Dethroning either would give the Cats a statement win, and with the Badgers and Boilermakers currently eighth and ninth in the conference in points per game, strong defensive showings should be considered a realistic goal.

And, of course, there’s the season finale in Champaign against Illinois, with a seventh straight Land of Lincoln Trophy on the line.

The saying goes: “It’s not about how you start, it’s how you finish.” Early on in NU’s season, the Cats’ defensive starts were so rough that they proved too much to overcome. And over the scope of the season, NU’s 1-5 start in Big Ten play dashed its hopes of a big-time bowl game.

But when it comes to making a statement and proving that the defense’s direction under O’Neil is the right one, then yes, how the defense finishes does mean something to this program.