Indigenous journalists, activists reflect on Native voting power and coverage of their communities 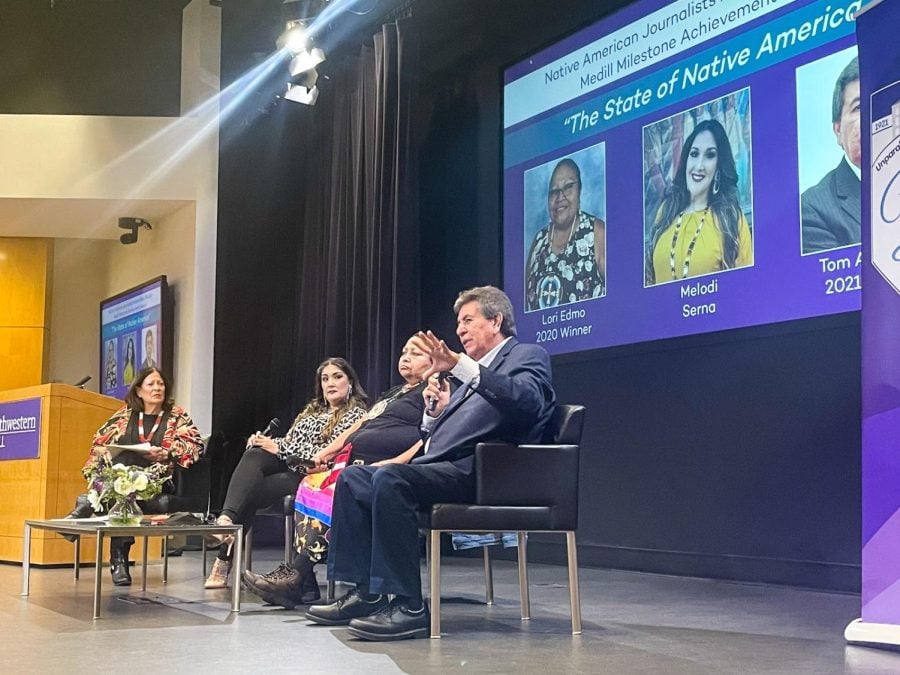 Serna, a member of the Turtle Mountain Band of Chippewa Indians and the Oneida Nation, said her community was heavily impacted by the people it lost to COVID-19, especially because of Native peoples’ reliance on oral tradition.

“Losing one person is like losing 100 … because you miss the stories, you miss the teachings and the language,” Serna said. “(We are) a seven-generation community, so when you lose one generation, you lose a lot of that history.”

Arviso is of the Ts’ah yisk’idnii’ Clan (Sage Brush Hill Clan). His maternal clan is Ta’baahi’ (Water’s Edge Clan), and his paternal clan is Tse’nahbil’nii’ (Sleep Rock People Clan). Arviso reports on the Navajo Nation, which occupies the largest land area of any Native American tribe in the country.

“When (Navajo Times) came to realize what we were dealing with, we did everything we could to stand at the forefront, to be a good, strong communication source,” Arviso said. “Our reporters and photographers went to places where no one else would go.”

Along with the ongoing effects of the pandemic, panelists also cited ongoing redistricting efforts as a pressing concern for Indigenous communities.

Lori Edmo, the 2020 award winner, said members of the Idaho redistricting commission indicated they intend to divide the Fort Hall Reservation into multiple districts. As part of the Shoshone-Bannock tribe, Edmo lives on the reservation and is editor of Sho-Ban News.

The Idaho state legislature does not currently have any Indigenous members, and voting across different districts will dilute their voting power, she said.

“Our reservation should be one district because we are sovereign, and we should have that right to say what we want on our reservation,” Edmo said. “That would really make a difference in helping us get some legislators elected.”

Arviso said the Navajo Nation is facing similar issues. Legislators have attempted to enact policies that would make it more difficult for Native people to vote, he said.

Many residents of the reservation are elderly or disabled, Arviso said, but some legislators are working to reduce the availability of mail-in ballots and voting locations near Navajo Nation. In some counties, people must have a rural address to register to vote, he said, which is difficult on reservations that do not rely on conventional addresses.

Medill Prof. Patty Loew, who moderated the panel, also pointed to the thousands of Indigenous children who have died in boarding schools as an underreported story. In June, Secretary of the Interior Deb Haaland, the first Native American person to hold the position, opened an investigation into the deaths.

Serna, who attended an Indigenous boarding school, said the mainstream media needs to report responsibly on these stories.

“There are families (whose) lineage stopped when those children died,” Serna said. “We are survivors of modern-day genocide, and we are still here, and that needs to be a story we are telling.”

Loew, a member of the Bad River Band of Lake Superior Ojibwe, closed the event by discussing the anti-Indigenous vandalization of the Native American and Indigenous Student Alliance’s painting at The Rock.

Reflecting on the boarding school deaths and The Rock’s vandalization, Loew said she is considering how journalists can highlight the ways Native people move forward after traumatic events.

She found comfort in the hundreds of community members who showed up in support of Northwestern’s Indigenous community after the vandalization, Loew added.

“(With) almost every story that is tragic in Indian Country, there’s some truth that we look to and find something positive,” Loew said. “I’ve been thinking a lot about what happened at The Rock over the weekend and trying to dwell on the reaction of solidarity that it provoked.”