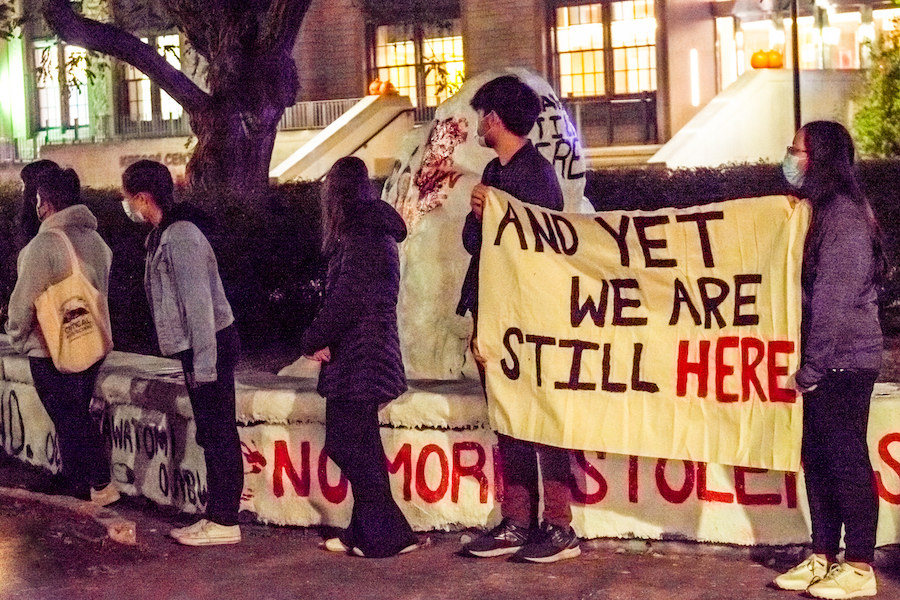 NAISA students led a reflection at The Rock Sunday night in response to the anti-Indigenous vandalism that defaced their painting of The Rock for Native American Heritage Month.

Northwestern’s Native American and Indigenous Student Alliance gathered Thursday to paint The Rock in celebration of Native American Heritage Month for the first time in the organization’s history.

The idea was years in the making, according to Isabel St. Arnold, a NAISA member and a Keweenaw Bay Ojibwe. For the longest time, the SESP senior said the organization didn’t have enough members to take on a project of that size. But a recent influx of new members made it possible this year.

After NAISA members took shifts guarding The Rock — as per tradition — they began the painstaking process of painting it, St. Arnold said. The design, which took about three hours to complete, featured several messages, including red handprints representing missing and murdered Indigenous women in North America, a land acknowledgement for the Anishinaabe tribes — which include the Ojibwe, Odawa and Potawatomi tribes — and a figure of a Jingle Dress Dancer signifying healing.

This wasn’t the first time The Rock had been painted for Native American Heritage Month. Last November, after The Rock had been made to look like a pilgrim, a group of Indigenous graduate students painted The Rock with pro-Native and Black Lives Matter messaging. But by Thanksgiving, their messages had been altered and painted over.

NAISA members knew the possibility of history repeating itself wasn’t out of the question, however. They joked while they worked, off-hand, about how long it would take for their painting to be defaced like last year’s.

This time, it took two days.

“We need people to have our backs”

Vandals defaced NAISA’s Rock painting on Saturday night with anti-Indigenous rhetoric. NAISA is preparing to confront the University and demand changes to make campus a safer and healthier environment for Indigenous people.

Vandals spray painted “Ojibwe? No Way!” and changed a land acknowledgement, “You are on Anishinaabe land,” to “You are on China’s land.” They also painted over some of the group’s messages, including “Happy Native American Heritage Month!” and “Bring our children home!”

St. Arnold said NU’s Indigenous community has been trying for years to get the University to reconcile with its troubled history, including founder John Evans’ role in the Sand Creek Massacre. Evans is considered by some historians “deeply culpable” in the massacre, which killed about 200 Cheyenne and Arapaho people. A 2014 University report found Evans did not directly plan, but held partial responsibility for being one of many people who helped create a situation leading to the massacre.

NU has not publicly detailed any plans to review security footage of The Rock or investigate the vandalism. St. Arnold said the vandalism is clear evidence that the University hasn’t been doing enough to deal with its anti-Indigenous legacy and support Indigenous students.

“It’s showing everyone else that this place is still a settler colonial project, and Indigenous students and Indigenous community members are not part of that plan — they’re not supposed to be here,” St. Arnold said. “And there’s people who still feel that way about us.”

NAISA students hung up a banner next to The Rock reading: “And yet we are still here.” St. Arnold said, at this time, there are no plans to paint over the vandals’ work. Instead, NAISA is leaving it out in the open to raise public awareness of anti-Indigenous hate.

Medill Prof. Patty Loew, a member of the Bad River Band of Lake Superior Ojibwe, spoke at the reflection event as CNAIR’s director. Loew said she wants to believe that the NU community is better than this. Now, she said, is the time to prove that it can be.

“We don’t need people to lift us up,” Loew said. “We need people to have our backs. So when you leave tonight, think about the ways you can support us in our efforts. Because we are demanding change, and we need allies.”

NAISA requested in the statement to meet with the Board of Trustees, president, provost and chief diversity officer to discuss plans to address the vandalism moving forward, as a campus community. The group said it will continue to pursue positive change on campus.

“We hope this brings awareness to our communal fight against colonial power and its extension onto this campus,” NAISA said in the statement. “We have endured and will continue to stand up for our community, and we ask for your support.”

“An acknowledgement can only go so far”

SESP junior Isabella Twocrow, a member of NAISA, said it’s important to consider what accountability means for the University in a situation like this. Twocrow, who is Oglala Lakota and a member of the Ho-Chunk Nation, said NU has a responsibility to educate the campus about Indigenous communities and actively assist Indigenous students.

“An acknowledgement can only go so far,” Twocrow said. “We have to think about what it means to go beyond that.”

CNAIR member and global health Prof. Beatriz Oralia Reyes, a member of the Diné, attended the Sunday night reflection to express her support of Indigenous students.

Reyes said NU’s Board of Trustees has demonstrated a lack of support for BIPOC students. She said the University needs to support Indigenous students by taking serious action to make campus a healthier space for them.

“There’s so much more that they can do, and they have the power to do that,” Reyes said. “The students should be focusing on their studies. They should be doing things that every regular college student is doing right now, at this point in the quarter, but instead they have to focus on addressing this really hostile environment and trying to figure out how to move forward.”

Even though these recent events have lent momentum to NAISA’s cause, Twocrow said she doesn’t want marginalized individuals to be the only ones actively pursuing change on campus. The burden is too much, she said.

“It just speaks to the fact that BIPOC students are never just students on this campus,” Twocrow said. “We have to be so much more, and I’m personally very tired of that.”

Correction: A previous version of this article didn’t include all the tribes named in the land acknowledgement. It also misstated Isabella Twocrow’s tribal affiliation. The Daily is committed to serving the communities we cover and equipping staff to report and edit sensitively and accurately. The Daily regrets the error.

— Defining Safe: The Path to a Minor in Native American and Indigenous Studies