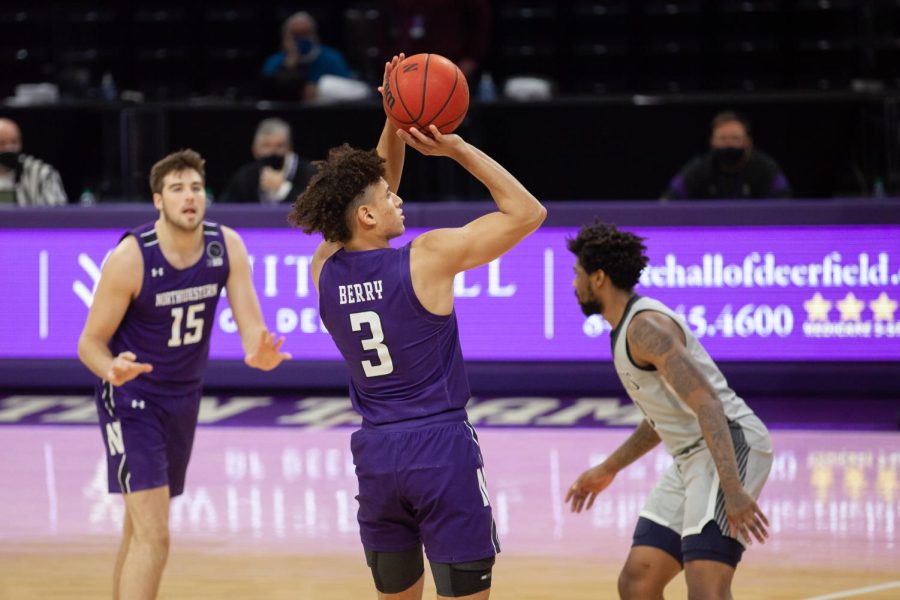 Early in the first half of Northwestern’s Feb. 10 home date with Indiana, sophomore guard Boo Buie checked in for the Wildcats.

He flashed his usual penchant for big plays, rebounding a missed free throw and collecting redshirt sophomore guard Chase Audige’s miss on the next possession. But Buie played the Cats’ double-overtime loss in a different jersey than his familiar No. 0. He wore freshman guard Ty Berry’s No. 3, a sign of support after Berry’s father’s sudden death that spoke to the strength of their relationship.

“I think of Boo as an older brother,” Berry said. “He always has had my back and shown me the ropes since I got here … for him to do that was big time and it meant a lot to me.”

Berry is entering his second season with NU, and teammates and coaches are excited about his potential. Originally from Newton, Kan., Berry averaged just 14.5 minutes per game his freshman year, but appears poised to step into a bigger role as a sophomore.

In the Cats’ Thursday night exhibition win over Lindenwood, he was everywhere, blitzing the Lions for 17 points, five rebounds and two assists in 24 minutes. As the offseason comes to a close, Buie said Berry is ready and excited to showcase his growth as a player.

“My biggest development (this offseason) has been working on the defensive end, and knowing exactly where I need to be not only on the ball, but off the ball,” Berry said. “I feel like I’ve improved in that area, and just letting the game slow down.”

NU won the contest for Berry’s services on Oct. 9, 2019, when he committed to the Cats over Minnesota, Nebraska, Kansas State, Wichita State and several other high-major schools.

At the time, he was a month away from starting his senior season at Sunrise Christian Academy in the Wichita suburbs, the school that produced Oklahoma legend and current Sacramento Kings guard Buddy Hield. Berry, a three-star prospect, was ranked by 247Sports as the Sunflower State’s top recruit in the class of 2020.

His senior year of high school, however, was disrupted by COVID-19, as was his freshman year of college. Instead of raucous Big Ten crowds in cities like Bloomington, Ann Arbor and West Lafayette, Berry was greeted with silence at Welsh-Ryan Arena and across the Midwest. He will play in front of home fans for his first time as a collegiate athlete on Tuesday against Eastern Illinois.

“We’ve been kind of kidding with him because he’s never played in front of a crowd,” coach Chris Collins said. “I’m a little bit worried about how nuts he’s gonna go in these places that are packed, because he’s so enthusiastic.”

Even without the energy of fans in the building, Berry made an instant impact for NU in 2021. In the Cats’ first two games, he made 10 of his 18 shot attempts, registering 15 points against Arkansas-Pine Bluff and 14 against Chicago State.

His fingerprints were all over NU’s biggest win of the season: its 79-65 upset of No. 4 Michigan State on Dec. 20, 2020. During that game, Berry made four of five field goals off the bench, including three 3-pointers. “Ty Berry. Buy stock now,” national CBS Sports pundit Jon Rothstein tweeted the evening of the upset.

But gradually, the Cats’ fortunes waned. Berry fell into a three-for-15 shooting slump over a four-game span from Dec. 23 to Jan. 3, during which NU began its 13-game losing streak. His minutes trended downward as the Cats ventured further into conference play.

Then, tragedy struck Berry and his family. His father, Tony Berry, died suddenly on Feb. 10 at the age of 56. An avid athlete, coach and fan, Tony and his lessons continue to influence Ty as he prepares for his first full season without his father.

Berry missed two games — losses to the Hoosiers and Rutgers — and returned to play four minutes at No. 5 Illinois. Collins said Berry’s “tough hardship” set him back somewhat, but his talent and leadership put him on the right track.

“The biggest lesson that my pops taught me was to never take anything for granted,” Berry said.  “Every time I go out on the floor to play with a passion and be excited for the opportunity I have. That means a lot to me.”

Berry has modeled elements of his game after Phoenix Suns guard Devin Booker and Miami Heat guard Tyler Herro, two players who are — in his words — “not only really good shooters, but good all-around.” Berry shares a statistical quirk with Booker in particular: neither started a game in their freshman season.

That appears likely to change in year two. Forward Miller Kopp is gone, having taken his shooting abilities to Indiana. On what is suddenly a veteran NU team, Berry forms an important bridge between upperclassmen like Buie and the team’s three freshmen — guards Brooks Barnhizer, Julian Roper II and Casey Simmons.

“I was in (the freshmen’s) shoes last year, and it’s hard anywhere,” Berry said. “I’ve just been trying to help the young guys, as their development continues, just telling them where they need to be, helping them, and being kind of a mentor to them.”

It’s the Cats’ mix of veterans and newcomers, according to Berry, that will make them one of the Big Ten’s most improved teams in 2022.

“We have a lot of veterans and they know so much about the game,” Berry said. “Just practicing with them every day, I can see how special our team is going to be this year.”

— Basketball Preview: 22 reasons you should be hyped for Northwestern basketball

— Schott: The 2021-22 season will be a defining campaign for Northwestern women’s basketball