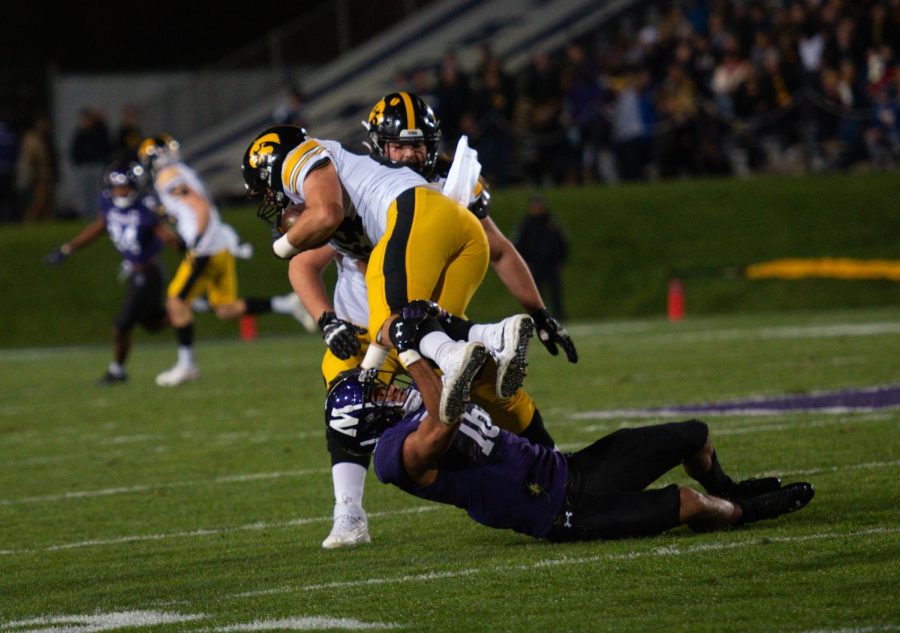 Brandon Joseph wraps up an Iowa receiver. The sophomore safety had nine tackles in Northwestern's 17-12 to the No. 22 Hawkeyes.

Playing in Ryan Field for the last time in the 2021 season, Northwestern had opportunities to steal its first Big Ten West win in comeback fashion against No. 22 Iowa.

A pair of highlight-reel 31-yard gains by sophomore running back Evan Hull spearheaded a fourth quarter touchdown drive, pulling the Wildcats within a single possession with just over two minutes remaining. After a defensive stop, senior quarterback Andrew Marty and the Cats offense had one last chance to score a go-ahead touchdown.

Instead, Marty recovered a fumbled snap, then lobbed an ill-advised throw to the left sideline, which Hawkeye defensive back Dane Belton picked off for a game-sealing turnover and Marty’s third interception of the night. Iowa (7-2, 4-2 Big Ten) survived he late surge to win 17-12 and prevent the Cats (3-6, 1-5) from taking their first division win of the season.

“There’s a reason they were ranked No. 2 in the country a couple weeks ago,” coach Pat Fitzgerald said. “We put together a really good game plan and had ample opportunities to win the game.”

The Hawkeyes entered the weekend in freefall, scoring a combined 14 points in losses to Purdue and No. 21 Wisconsin after peaking at No. 2 in the country in October. The trend continued through the first quarter, as Iowa’s first three drives culminated in punts.

“We had an idea that they might do some things if things sputtered a little bit and maybe make a change,” Fitzgerald said. “It pretty much stayed the same from our perspective.”

Padilla’s spark, along with a 100-yard first-half performance from running back Tyler Goodson, helped Iowa take control early . The Cats, starting Marty for the first time since Nov. 2019, struggled to find any answers or resolve their own quarterback situation.

After Marty broke loose for a couple of first down scrambles on NU’s second drive, Iowa’s defense stifled the Cats’ rushing attack. The Hawkeyes took Marty’s running abilities out of the equation with only 14 yards on 13 carries and slowed down Hull, NU’s lead back.

The run game’s stagnation, along with the return of leading receiver Stephon Robinson Jr., led Fitzgerald and the Cats to test the Hawkeye secondary. Marty finished the night with 44 passing attempts, and while his 270 yards were nearly a season-high for NU, he completed just 56.8 percent of his passes and threw three interceptions, each on deep passes.

“I’m confident in Steph and (junior wide receiver) Malik (Washington) and all these guys have the ability to win downfield, which is fun,” Marty said. “It’s something that we specialize in and continue to move forward with.”

Though the Cats’ offense failed to find the end zone the first three quarters, the NU defense tightened up against Padilla and Goodson and kept the Cats’ hopes alive. Iowa converted just two of 14 third-down conversions and punted on nine of its drives.

Even when Marty’s second interception gave the Hawkeyes the chance to put the game away, NU defense stiffened after midfield and forced a punt. Hull’s heroics — the sophomore finished the game with 89 receiving yards and a touchdown — cut the deficit to five points and Iowa took up just 24 seconds of game clock in a three-and-out on their next possession.

But the Cats’ two weaknesses — turnovers and missed opportunities — came back to haunt them on Marty’s game-ending interception.

“We came into the game saying if we eliminate turnovers, we would have won that game,” Marty said. “And we still gave ourselves the opportunity to win that game, that’s what hurts the most.”

Marty was one of the players honored during the Cats’ Senior Day festivities pregame, with the primetime match marking the final Ryan Field game for the senior class. With three games left on the schedule, that group plans on bringing a single-minded focus and energy each week.

“I was blessed to call my last game at Ryan Field an absolute dogfight,” senior defensive tackle Joe Spivak said. “That’s what I’m thinking about, battling these last three games. I can think of quote unquote ‘legacy’ when I’m 45.”