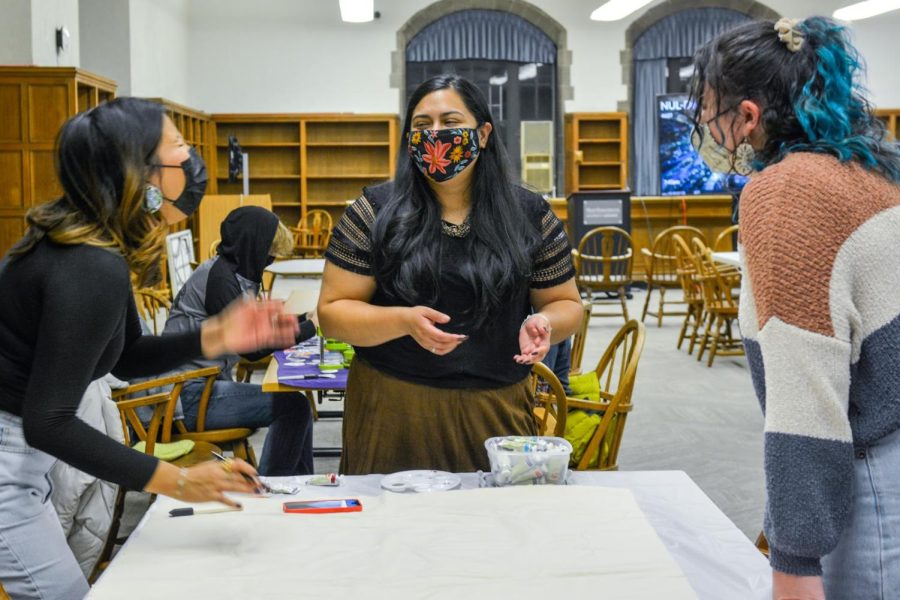 Indigenous community members paint a banner that they will carry in a procession later this month. Tuesday’s event was the eighth annual commemoration of the Sand Creek Massacre.

The event in Deering Library marked the eighth annual commemoration of the massacre. It is one of three pieces of programming Northwestern is hosting this month to honor the victims of the massacre.

On Nov. 29, 1864, U.S. Army members killed more than 200 Cheyenne and Arapaho people in Kiowa County, Colorado — one of the most violent attacks against Indigenous people in the country’s history. NU founder John Evans was governor of Colorado at the time. In 2014, the University released a report stating that Evans had no direct involvement in the massacre, but a separate University of Denver report deemed him “deeply culpable” for the tragedy.

The making activities were a departure from previous years’ programming — which Native American and Indigenous Student Alliance member Isabella Twocrow, a SESP junior, said she appreciated.

In the past, the anniversary events have been geared toward educating the NU community about the massacre. However, Twocrow, who is Oglala Lakota and a member of the Ho-Chunk Nation, said this left little space for the Indigenous community to process and heal together.

“We didn’t really have much time to mourn the massacre and mourn the mothers, the children, the elders that were lost at the massacre,” Twocrow said. “Having a making like this feels a lot better, and it feels less performative.”

During the event, attendees created a banner, crafted personalized buttons, made tobacco prayer ties and painted pieces of birch bark. The bark pieces were left over from artist Wayne Valliere’s project last month building and launching a canoe on the shores of Lake Michigan.

Multicultural Student Affairs, NAISA and the Office of Institutional Diversity and Inclusion are co-hosting the triad of events. For the other two events, they have made “Only the Mountains,” a short documentary on the massacre commissioned by NU, publicly available. On Nov. 20, community members will take part in a bonfire and a procession carrying the banner students painted Tuesday with an image inspired by the film.

MSA Assistant Director Aaron Golding, a member of the Seneca Nation, said the number of events also distinguishes this year’s commemoration from past years. The University has previously only hosted a single event for the anniversary, he said.

“The material’s pretty heavy, and it’s hard to talk about,” Golding said. “We wanted to create more opportunities for people to engage (who) maybe missed out when it was just one event.”

The Sand Creek anniversary events will be interspersed with a month of MSA programming for Native American Heritage Month. However, Director of Native American and Indigenous Affairs Jasmine Gurneau said the commemoration series has distinct goals from the more celebratory and social events the rest of the month.

Gurneau, a member of the Oneida and Menominee nations, said she encourages the larger NU community to engage with both sets of programming.

“We’re hoping that this reflection process will help folks to think about what it means to be connected to a place and how they came to be to a place and what their responsibility is,” Gurneau said.

NAISA member and SESP senior Isabel St. Arnold said she first learned about the massacre as a freshman and has attended the commemoration events every year since.

Grappling with this history and NU’s involvement was difficult as an Indigenous student, said St. Arnold, a member of the Keweenaw Bay and Ojibwe tribes. Like Twocrow, St. Arnold said processing alongside other Native American and Indigenous community members has been healing.

“It’s important to me as an Indigenous student on campus that we’re forcing Northwestern as an institution to reckon with this history and to recognize it and to acknowledge it,” St. Arnold said.

Correction: A previous version of this article misattributed a quote from Isabel St. Arnold. It also misstated Isabella Twocrow’s tribal affiliation. The Daily is committed to serving the communities we cover and equipping staff to report and edit sensitively and accurately. The Daily regrets the error.