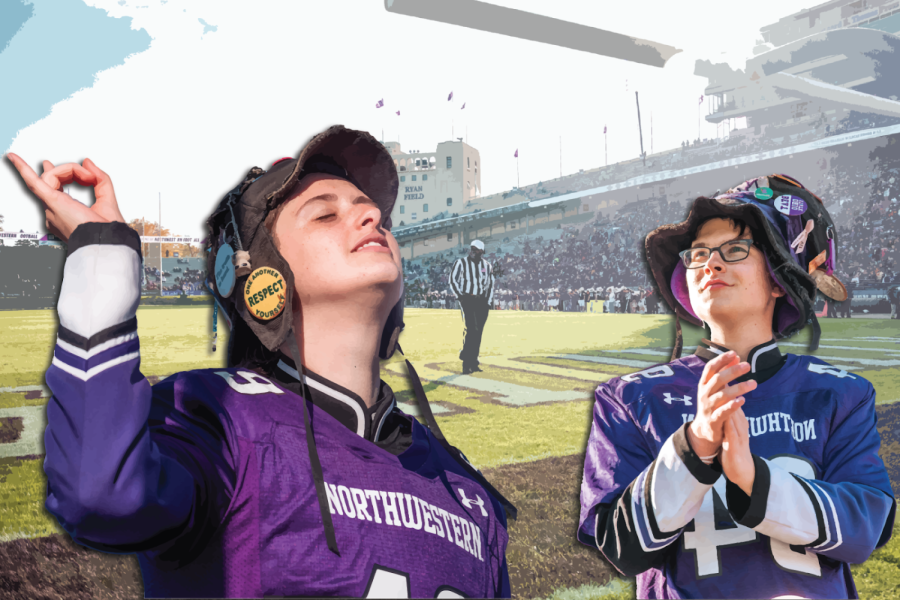 Hannah Zimmerman and Coop Daley. The pair are NUMB’s Spirit Leader and Grynder, responsible for keeping the band and crowd energized during football games.

If you’ve ever been to a Northwestern football game, you’ve likely seen two people in the marching band section standing on high platforms, perhaps throwing a chicken to each other or growling when the team is on defense. You’re looking at Northwestern University Marching Band’s Spirit Leader and Grynder, also known respectively as Weinberg junior Hannah Zimmerman and Medill junior Coop Daley.

Zimmerman and Daley function as energizers for the band and the student section during gamedays. Although they’re both regular members of the band, playing flute and tuba respectively, their roles on gameday look quite different.

“We’re not special members of the band,” Daley said. “We’re just an extension of the band — we don’t want to be differentiating ourselves.”

Gameday preparations revolve around “Spirit Sessions” after Thursday night rehearsals, during which the duo prepares an activity-filled session to energize the band before the game.

During these sessions, Daley said he and Zimmerman perform bits and chants, incorporating the band into their performances, to get them excited about the game.

“We plan out a presentation or mad libs, but it’s generally just a chance for the band to interact in a way that isn’t structured,” Zimmerman said. “We interact with each other and also get excited about the game even if our chances aren’t looking good.”

The Spirit Leader and Grynder are known for their characteristic attire each game. The gameday fits include nods to NU’s win at the Rose Bowl in 1949 — the reason behind their wearing jersey No. 49 every game — and hats with distinct pins on them, with each subsequent Spirit Leader and Grynder adding their own special touch to the hat. With buttons like “don’t just be a number” — because NUMB members are called NUMBers — both hats carry years of prestige and memories.

“I like how much history it has,” Zimmerman said. “They fall off all the time, especially while we’re doing pushups (after a touchdown). They’ve been through a lot.”

During games, Zimmerman and Daley perform chants and poems to keep the crowd hyped, even during losses. Zimmerman said her favorite cheer is after first downs, when they shout, “What time is it? It’s time to move the chains. Whoosh!”

Daley said he enjoys “shredding,” a duty performed by the Grynder. He pulls from a sack filled with prompts for comedy bits, and one of them includes getting an apple during halftime and “shredding” the apple in 10 seconds by eating down to the core and then breaking it in half — a tradition he said the band loves.

The two also throw a chicken to each other when a flag is thrown, do pushups on the field after a touchdown, growl when on defense and much more.

“We carry on a huge number of traditions that we just saw our freshman year,” Daley said. “Some have a history dating back to the ’70s, but some of them are super new and still in development, so it’s super fun to keep those going and see them evolve over time.”

To ensure the energy is as high as possible on gameday, Daley and Zimmerman keep their chants secret, even from each other, until right before the game. They said they work off of each other to figure out the best ideas and bits for both the band and the crowd.

Both students said it’s vital to be able to project their voices during games to reach as many people as possible in the stands. Because their energy is essential once the game starts, Daley and Zimmerman also hype up the band before opening the game.

The two students also work with a third member, the Geek, who is a student known as the “band nerd.” This year’s Geek is McCormick senior Chima Aharanwa, who does the “calculus cheer” during games, a cheer that includes math puns. The two said they can always run an idea by him for logistical reasons, as he is on leadership as well.

“There’s very much a camaraderie that comes with being in this group … You’re out marching in the cold or the wet for hours at a time, but at the same time, you’re yelling about how maybe this is the week you’ll see one of the biggest upsets in college football history,” Daley said. “I really like being a person that can facilitate that type of bonding.”

Ultimately, both students said they love what they do because of the joy it brings to everyone around them.

While this is Zimmerman’s second year as Spirit Leader after a season of Zoom spirit sessions, this is Daley’s first year as Grynder. Zimmerman said she loves the opportunity to be creative and make people laugh.

“I love the opportunity to take a bleak-looking situation and get people to laugh about it or make people more excited during rehearsal, and also just give the band a chance to spend time and laugh together as a community rather than a team marching together,” Zimmerman said.

Daley echoed her sentiments, saying he loves to engage with everyone outside of a professional setting and bring them together.

Daley and Zimmerman said they work well together as Grynder and Spirit Leader, ultimately culminating in successful, energizing chants for both the band and student section on gamedays.

“Our work styles go together really well,” Daley said. “She welcomes in the band, and I punch them through at the end.”