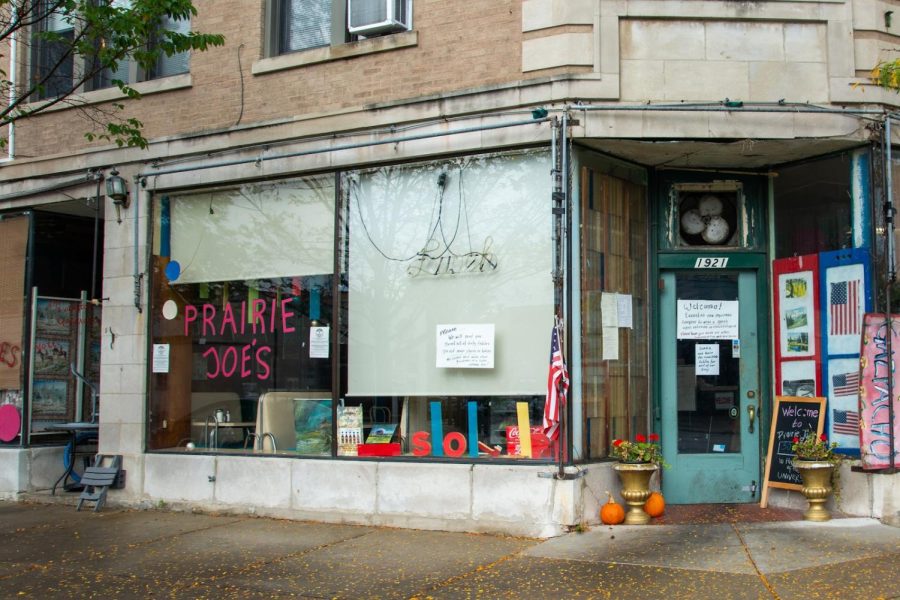 Prairie Joe’s storefront. After 30 years of business, the restaurant closed in October.

The iconic locale opened in 1991, when owner Aydin Dincer bought an old snack shop and diner called Jordan’s and renamed it Prairie Joe’s. Most of the old clientele stayed through the transition, and gradually Dincer decided to modernize the restaurant for the next stage of its life.

“I saw the whole space as my easel to do what I wanted,” Dincer said. “It was like a script that I was writing for 30 years.”

Located on the corner of Prairie Avenue and Central Street, Prairie Joe’s was not only an eclectic breakfast and lunch eatery known for its casseroles and soups, but also a gallery for its owner and other local artists’ art.

During the Farewell Open House, a final event hosted by the restaurant as a goodbye to the community last week, fans of Prairie Joe’s poured in to see the wall-to-wall artwork for sale. At the event, Dincer also sold artifacts from around the diner, including menus, salt and pepper shakers and even a booth.

“Prairie Joe’s just has a very different atmosphere, a very different vibe, and there isn’t anywhere else in Evanston that is like that,” said Nina Kavin, a regular patron of the restaurant. “This is just the way Aydin and Aydin’s family made it. It was just a very special place.”

Prairie Joe’s became a fixture of the community, providing a constant and comfortable place for people to go, Kavin said.

Dincer announced the restaurant’s closure on its Facebook page in September. More than 100 people commented on the post to show their support for Dincer’s family and love of the restaurant.

Nolan Winkler, who grew up steps away from Prairie Joe’s, said that he and his family would play “I Spy” among the paintings and knicknacks while waiting for their food.

“(Prairie Joe’s) has been so special and an integral part of the Central Street community,” Winkler said. “It was a place in my childhood.”

Unlike many other restaurants that have closed in the past year, Dincer said the restaurant did not close due to COVID-19 related issues. While he felt humbled by customers’ appreciation, he said he needed to retire because his work was very time-consuming.

“The decision to close was based mostly on family obligations,” Dincer said. “The intensity of what I do to myself is pretty high, so I want to go in another direction and have more time.”

For fans of Dincer’s artwork, the closing of Prairie Joe’s is not the end. He said he hopes to open a gallery for his art and find somewhere to continue selling his famed casseroles and soups.

As for the diner space itself, Dincer has announced a new owner will be taking over the restaurant, though he has yet to say who it will be. He said he feels confident the new owner will keep a similar theme with some new updates, much like Dincer did 30 years ago.