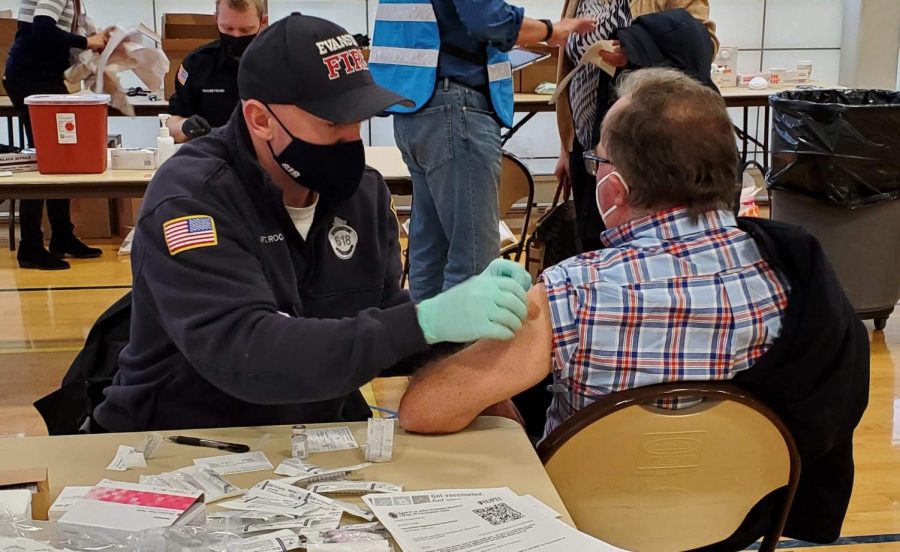 Photo courtesy of the Mayor’s Office

An Evanston resident is bandaged after receiving a vaccination. The city’s COVID-19 response staff will be retained through 2022 using funds from the American Rescue Plan Act.

The department will receive $575,000 of the city’s incoming $43 million federal grant from the American Rescue Plan Act. Funds from the act can only be used toward specific types of local projects, including those related to pandemic recovery. This disbursement will be used to pay salaries through 2022 for the city’s contact tracers, specialized healthcare workers frequently visiting long-term medical care facilities and other medical staff.

City response staffers have been increasingly anxious about the immediate futures of their job security and salaries, Ogbo said.

“It will help calm the nerves of our temporary staff if I can relay a message that (the funding) has been approved in council tonight,” Ogbo said. “It took me a while to assemble the professionals that we have, and I don’t want to lose them.”

Ogbo also said the IDPH will likely approve new grants for 2022, which the city could use down the line to reimburse the spent ARPA funds for a different use.

The council also discussed four other proposed ARPA funding allocations, but it ultimately postponed all four votes to later dates.

The largest proposed allocation was $1 million toward renovating the AUX, a planned Black-owned and wellness-focused commercial hub in the 2nd Ward currently in its fundraising phase. The space will host 10 businesses and aims to open in fall 2022, after which the building’s current owner, the Growing Season, will sell shares of the building’s ownership back to the community.

“Why African American businesses take so long to get started is that lack of capital,” Fleming said. “This is the chance for us to put our money where our mouth is, in a city in which we proclaim to be doing reparations.”

While councilmembers broadly support allocating ARPA funding to The AUX in general, several raised concerns about committing to fund a specific project before the council more clearly allocates funding for broader categories in the 2022 budget.

Ald. Jonathan Nieuwsma (4th) said he supports the proposal, but he wants to wait until more budget information is available.

“I don’t think we should be allocating money from the economic development bucket until we have the complete picture in front of us,” Nieuwsma said. “This shouldn’t be just first come, first serve. And that’s not to not to be dismissive of the AUX folks, because they have followed the procedure that we have asked them to follow.”

The council voted 8-0 to return the proposal to the Economic Development Committee, with Fleming abstaining. The committee will reconsider the proposal before returning it to the council for a full vote.