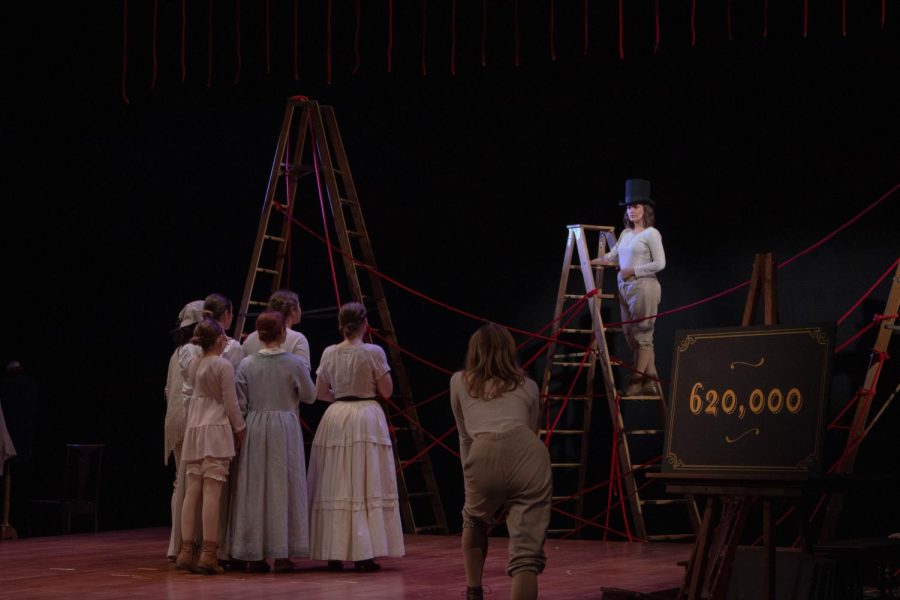 A photo from the dress rehearsal for “The Battlefields of Clara Barton.” One of the characters in the show is Abraham Lincoln.

The American Music Theatre Project and the Wirtz Center this past weekend premiered “The Battlefields of Clara Barton,” a modern folk-rock musical exploring Barton’s role as a nurse in the Civil War.

Playwright Suzan Zeder and composer Jenn Hartmann Luck started developing the musical in 2017, but students at Northwestern, University of Texas at Austin and Austin Playhouse have developed their own versions of the production. Based on audience reviews from all three versions of the musical, the show’s creative team will refine it before its ultimate completion.

The folk-rock musical highlights the life of Barton, who earned the nickname “Angel of the Battlefield” from her work as a nurse during the Civil War. After the war, she continued nursing work and founded the first Red Cross in the United States.

However, “The Battlefields of Clara Barton” explores beyond how the public typically remembers Barton. The musical also details her work as a champion for women’s rights, abolition of slavery and public education. Additionally, the production explores Barton’s struggles with mental health throughout her life.

Communication freshman Anne-Sophie Lacombe Garcia, who worked backstage assisting with costuming and other tasks, said she enjoyed working on a production based on an original script.

Communication Prof. Rives Collins, who directed the musical, said the AMTP gives students and faculty many opportunities to connect with professionals and develop new musicals.

This project in particular allowed for a multigenerational conversation between the original writers and the student developers, Collins said.

“This is a workshop production, in which all of us here at Northwestern find ourselves in the service of the playwright and the composer, to help them see what they’ve written — to bring all of the talents of our students and the devotion of our faculty and staff to helping develop new work,” Collins said. “This one is very likely to have a life after Northwestern.”

Moore said she enjoys watching historical musicals because of their ability to dive deep into an event or historical figure beyond common knowledge. She said she also loved how the musical “advocated for hidden stories” such as the story of the 54th Massachusetts Infantry Regiment, which was comprised mostly of Black Union soldiers.

“It was really cool watching works in progress come to life,” Moore said.

The musical staged a three-show run this past weekend, including a Saturday night performance to a packed house.

Collins said he loved collaborating with students on the musical, especially because they were willing to embrace change as the work developed. With this musical marking Collins’ first time directing live theatre since the pandemic’s start, he said he thought the message of the musical was all the more pertinent.

“The overarching theme of ‘The Battlefields of Clara Barton’ is the illumination of dark places, or radical hope,” Collins said. “One that says in spite of the darkness, we will find ways to move forward.”

— Captured: The Wirtz Center presents “The Battlefields of Clara Barton”

—  How to navigate the Northwestern theater scene