Football: Wide receivers ready to step up against Minnesota following injuries to Kirtz and Robinson Jr. 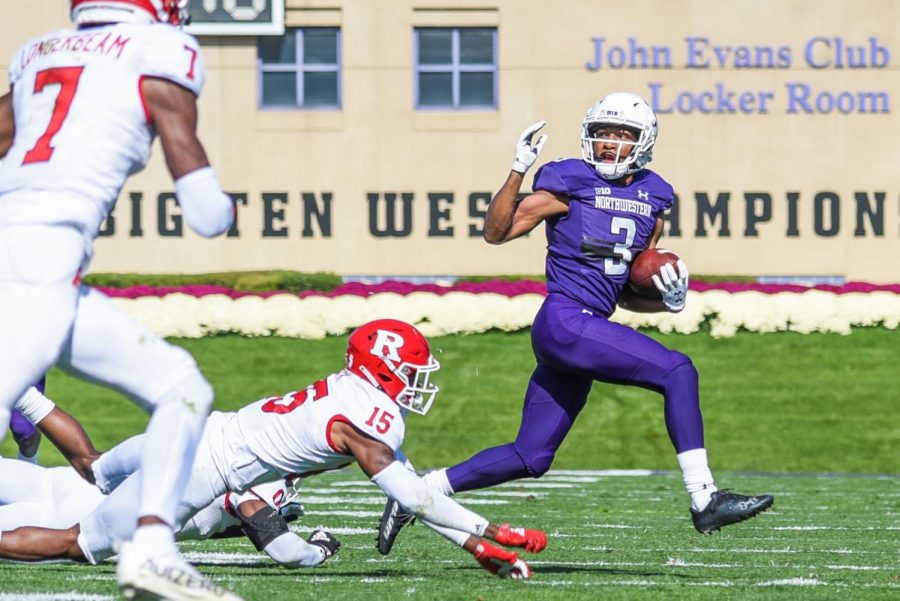 The revamped roster included a wide receiver group including sophomore Bryce Kirtz and graduate Stephon Robinson Jr., both making their starting debut in purple and white. The decision paid off for the Cats, as the two led the receiving corps in yards for five weeks — Robinson Jr. with 309 and Kirtz flexing 203.

However, entering their eighth matchup of the season against Minnesota, the Wildcats’ duo will not take the field together Saturday due to injuries. After a 33-7 loss to No. 6 Michigan last week, coach Pat Fitzgerald announced Kirtz will miss the rest of the season with a non-contact injury. Robinson Jr. left the game early, and his status for Saturday is unknown.

Although a major blow to offense, wide receivers coach Dennis Springer emphasized that the unit has a “next man up” mentality and its players will be ready when their number is called.

“This team needs everybody,” Springer said. “We feel like we’ve prepared everyone for an opportunity to play, and when your opportunity comes, it’s time to step up and make those plays.”

Ahead of the Minnesota matchup, NU’s projected depth chart lists wide receivers junior Malik Washington and senior JJ Jefferson as the starters along with Robinson. Since Kirtz’s early exit against Nebraska, Washington has engraved himself as an essential piece of the offense, averaging over 60 receiving yards in the last three games and totaling 318 on the season.

Jefferson will line up for his third contest of the year after making his season debut against Rutgers. Although not suiting up in 2020, the veteran already holds credibility to his name, posting back-to-back 150 yard seasons in 2018 and 2019.

The Houston native understands Kirtz and Robinson Jr.’s talent and skill can’t be replaced, but he said he is excited to be back on the field.

After its battle against the Golden Gophers, only Big Ten West opponents remain on NU’s schedule. While the Cats may not make it to the Big Ten Championship, it will be vital for the wide receiver room to be on the same page as sophomore quarterback Ryan Hilinski in the chase for a bowl game.

The group has flashed signs of consistency at various times during the year, but has struggled to find its stride. Coach Pat Fitzgerald said by taking the season practice by practice and trusting the game plan, the wideouts’ confidence will grow and translate to the field.

“They just need to play up to their potential,” Fitzgerald said. “I know those guys would never want an opportunity based on someone else getting injured, but I know they are excited to play.”

Unlike NU, who lost last year’s starting receiving corps to the NFL Draft and the transfer portal, Minnesota’s back end defenders flex veteran experience. Each starter in the secondary is a junior or older.

Although facing an experienced group, sophomore wide receiver Genson Hooper-Price is eager for himself and the room to step up in their teammates’ absence. Understanding the team is not where it wants to be record wise, Hooper-Price said the Cats have two roads to choose from. He hopes they will choose the road to victory.

“Everybody’s pointing the finger at themselves and figuring out what they can do to improve,” Hooper-Price said. “This offense is going to reach new heights and reach new levels as we continue to work, continue to grow as a group and reach our potential.”

— Football: Evan Hull searches for answers on the ground as Northwestern’s season progresses