Swann: Why $35 is still too much for the Wildcats Classic 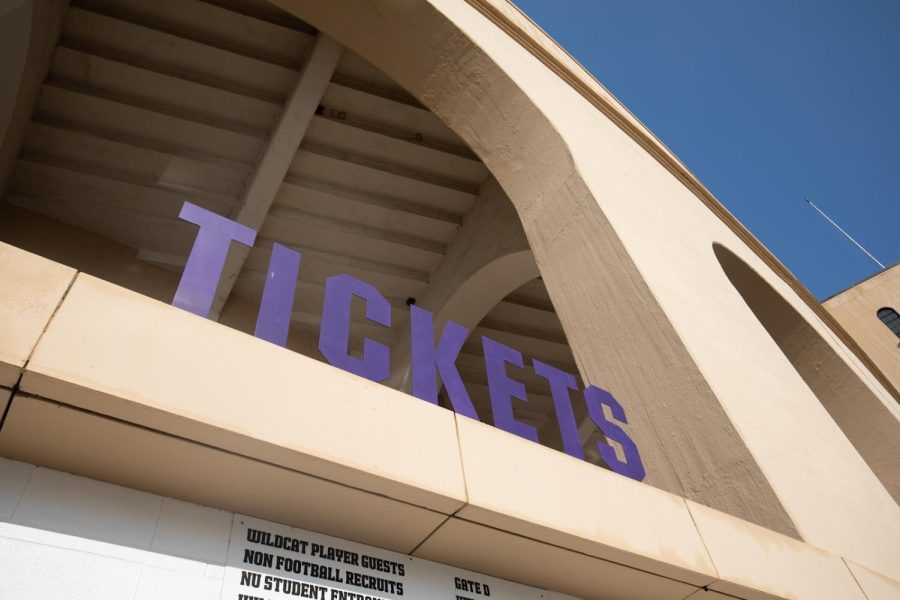 Fans can buy tickets for Northwestern football games at the box office located outside Ryan Field. Northwestern students will have to pay $35 for tickets to attend the Wildcats Classic.

When Northwestern football was crowned the 2020 Big Ten West champions, earning their spot at the Big Ten championship against Ohio State, I was ecstatic, even though the pandemic kept me from seeing the game in-person.

Then, the Buckeyes’ run game trampled over the Wildcats in a resounding 22-10 defeat.

The shock on my face after that game has become my default expression for this entire season as NU (3-4, 1-3 Big Ten) suffers loss after loss. When I received an email from Northwestern Athletics saying I had to pay roughly $70 to attend the Wildcats Classic, I thought “immediately no.” Obviously, I wasn’t the only student who felt this way — the department sent an email Oct. 20 issuing a price reduction for tickets.

Tickets to the game and pregame tailgate at Lucky Strike are currently on sale for $35. But is that still worth it?

Honestly, the tickets should be free to students, just like all home games at Ryan Field. NU is getting obliterated in conference games, with a 56-7 rout to Nebraska and a 33-7 defeat to Michigan in Ann Arbor in their past two away games. With the prospect of facing a top Big Ten team, Purdue, that currently ranks third in the Big Ten West division, is it worth traveling to Wrigley Field when I can follow the game for free on my phone from the comfort of my dorm?

It would be a different situation if the team experienced more success, like their 2020 campaign, but to pay out of pocket at all for a squad that delivers mediocre results… the athletic department is stretching.

To call the tailgate “free” is also a stretch, since students still have to purchase the $35 tickets in the first place to gain access to free food, beverages and games prior to the contest. The idea of bowling at Lucky Strike seems intriguing initially, but the costs of transportation into Wrigleyville and a ticket to a game makes it less appealing. With a majority of students leaving homestand games at halftime, it feels like I’m being swindled out of $35 for a game most of the student population isn’t invested in.

The attraction to college football games, especially when your team is not doing too hot, comes from the tailgate and social aspect of it all. But with prices and time investment so high, the Wrigley Field turnout could well be less than the Ryan Field attendance. And if seeing Chicago sports events is the issue, students can buy cheaper tickets to see the Chicago Bulls, a professional team with an undefeated record four games into their season.

And, of course, there still is another factor to think about — winter in Chicago.

The Wildcats Classic is scheduled for Nov. 20, a time when the Midwest transitions into the core of its winter season. With football contests lasting three to four hours on average, sitting outside at Wrigley Field in a Chicago winter is the epitome of unattractive. Not only am I spending my own money to watch this game, but I run the risk of also catching a case of hypothermia.

As much as getting sick in winter before traveling home for Thanksgiving Break sounds splendid, my warm, cozy dorm room on campus might win this battle. I can easily hang out with friends, pack for break or spend time in downtown Evanston, while looking at the box score for the game, courtesy of technology.

In the grand scheme of things, NU’s marketing team is doing the student population a disservice by trying to profit from us for the “special” game. It’s not realistic to expect hordes of students, regardless of their financial situation, to pay for a football game and travel expenses to get to Wrigley Field. Especially when that team is not often bringing home wins or even staying competitive against other Big Ten teams.

I understand the financial stakes of this game. The Wildcats Classic is a huge game played at the prestigious Wrigley Field, and the athletic department is counting on students to help foot the bill. And the department has made attempts to compromise and meet students in the middle — athletic director Derrick Gragg responded on Twitter to an Oct. 12 op-ed by the sports blog Inside NU, promising that changes to the original $73 price tag were on the way. But the athletic department must also realize students will push back against covering a bill they didn’t ask for, and likely won’t be willing to weather crummy outdoor conditions for a quality of football that might not be too pleasant.

For the superfans who attend every game in the first row and paint their faces purple for gameday, Wrigley might be a no-brainer. But for the sensible student, the Wildcats Classic remains a hard sell.

This story has been updated to include context about Derrick Gragg’s response to student backlash over ticket prices.

— Football: From walk-on to one of the top linebackers in the country: Northwestern’s Chris Bergin is the embodiment of hard work

— Andres: An anthemic song could take Northwestern football games to the next level