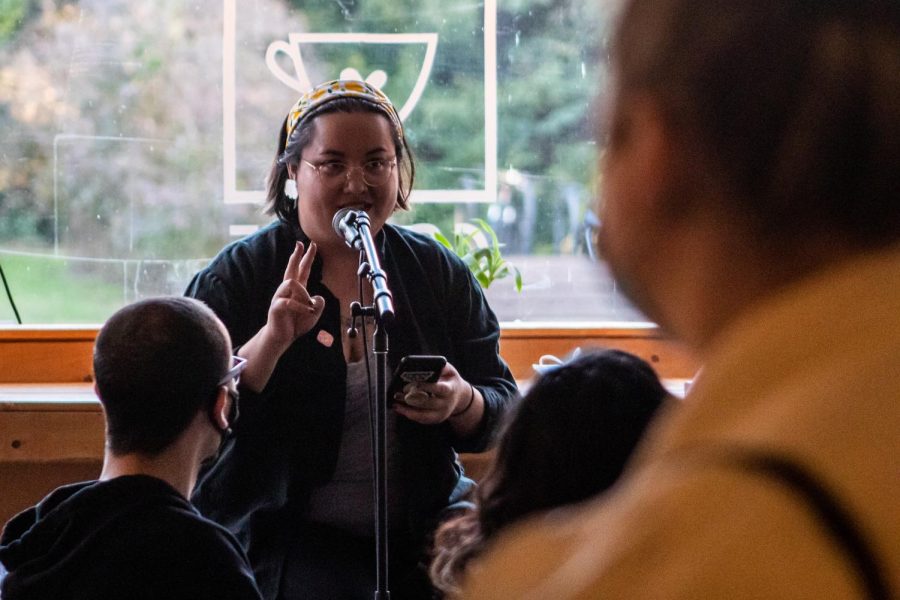 “Kapwa means oneness, togetherness, mutuality with one another, and kapé means coffee,” said Abbey Monsalud, an art therapy intern at Studio 3 and one of the event organizers. “We wanted to create a space to bring everybody together to experience this oneness with each other.”

Filipino American History Month commemorates the arrival of the first Filipinos in America on Oct. 18, 1587. Monsalud and Melissa Raman Molitor, co-founding director of Kids Create Change and founder of Kitchen Table stories, both said they felt it was important to create an event recognizing the presence and culture of Filipino Americans.

While Molitor has created programming for Asian American and Pacific Islander Heritage Month, she said she wanted to create a space that specifically highlighted Filipino American voices.

“It’s really important to celebrate the cultures that are underneath that larger umbrella so that people realize we’re not a monolith,” Molitor said.

Aldana, founder and creative director of local organization Luya Poetry, said art is a way for people to celebrate their personal cultural experiences. She cited Deneza’s songs about mental health and her mother, as well as Ucol and Taylor’s poetry as examples.

“To see Filipino people together celebrating, but also thinking about their own journeys and experiences and putting that in their art, is an important way to tell our stories,” Aldana said. “It’s a process of reclamation.”

Aldana said they hope people will share their art more, especially young Asian artists who second-guess themselves because they believe they won’t have an audience. They said witnessing art by people who share identities with them makes them feel less alone.

Monsalud described feeling this way in response to the performances at the event, especially Aldana’s spoken word poetry.

“I felt sadness, anger, the feeling of being seen and a lot of validation through her words,” Monsalud said. “I feel a lot of kapwa with these performers because the stories that they’re telling cut close to home.”

Attendees could also create weavings with natural fibers like raffia, banana leaves and bamboo reeds, as well as other traditional materials like shells and wooden beads.

Monsalud and Molitor explained that weaving has a long history in the Philippines. Molitor said that with technology, younger generations don’t need to carry on the traditional labor-intensive practices, so the event provided an opportunity for attendees to learn weaving and recognize how it brings people together.

Monsalud spoke about how celebration of Filipino traditions such as weaving can combat colonial mentality, which she described as the belief that one’s culture is inferior to the “dominant” culture.

“It’s very internalized, especially for the Filipino diaspora, and we often forget our roots,” she said. “As I get older, I definitely want to celebrate my heritage more. I want to fully immerse myself in the Filipino community and celebrate who I am because for so much of my life, I’ve pushed that to the side.”

Jay Costales, a first-year student at Columbia College Chicago, said they hadn’t been to Filipino events that featured weaving before and were excited about it.

Costales said they think it’s important for the diaspora to hold on to their heritage, especially with a resurgence of younger generations connecting back to their roots.

“Politics are a big part of why we are here,” Costales said. “And acknowledging that while also having some really good food and hanging out with friends is really important.”

The event continued on Sunday, when attendees made parols — Filipino Christmas lanterns.

Monsalud said she hopes people will leave the event knowing that Filipinos are worth listening to and worth celebrating. She also hopes the event will remind the Filipino community about how the arts can affect their lives for the better.