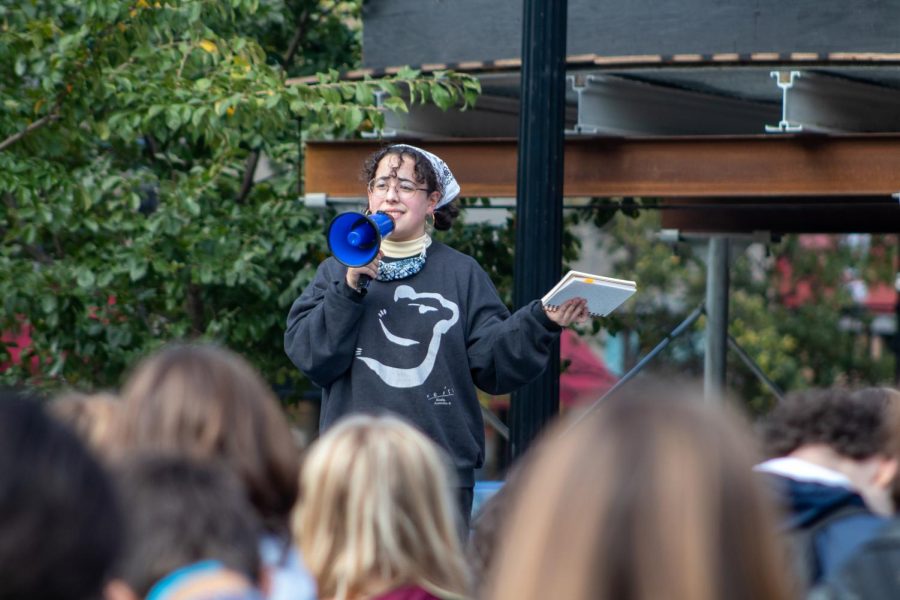 About 150 Evanston Township High School students walked out of their last class Friday afternoon, pressuring City Council to increase funding and support for the implementation of the city’s Climate Action and Resilience Plan.

The protest was organized by ETown Sunrise, an environmental justice group, specifically calling for the council to allocate American Rescue Plan Act funding to CARP, which aims for the city to reach net-zero carbon emissions by 2050. Organizers and other environmental justice activists said CARP currently lacks the funding and staff to stay on track with its goals.

ETHS senior and Sunrise Hub Coordinator Lily Aaron said the city must act now, rather than give more empty promises.

“We are literally walking out of our lessons so that we can teach them one,” Aaron told The Daily. “We are the voters of tomorrow, and it’s displaying that we care and we’re not going to let this slide.”

Protestors walked from school to Fountain Square, where organizers encouraged students to call their alderpeople and Mayor Daniel Biss to demand ARPA funding be allocated toward CARP.

But the federal government does not recognize CARP initiatives as a preset category for ARPA fund use. Interim City Manager Kelley Gandurski has recommended including CARP projects within existing ARPA categories, rather than allocating the money directly.

“It’s important to localize because it gives us more power,” Morales-Grahl said. “We know our community and we know what we need. By being specific, we can really plan out and be well organized and our message can be very clear.”

Before beginning speeches, Morales-Grahl led a land acknowledgment and invited attendees to close their eyes to focus on the natural world and what it provides. ETown Sunrise seeks to build mindfulness of peoples’ present and continued participation in colonialism, she said.

“The reason that we are facing this scary climate reality is because of colonialism and capitalism and White supremacy,” Morales-Grahl said. “We have to understand those structures to be able to fix and move forward with climate action and climate justice.”

The action featured speeches by ETown Sunrise organizers, Northwestern SESP junior Pablo Rodriguez, Ald. Bobby Burns (5th) and Ald. Jonathan Nieuwsma (4th). Students also had an opportunity to speak during an open mic at the end of the event.

ETHS freshman Adil Rosenfeld told The Daily it was exciting to be a part of the walkout. But he wished more students participated, since he believes climate justice is such an important cause.

“Our planet is deteriorating, and the younger generation is really looking at it as a big thing, but the older generation (isn’t),” he said. “We have to take it into our own hands.”

When the students dispersed after the protest, their messages, like “Climate justice now,” “Implement CARP” and “Listen to our voices,” were left behind in colorful chalk.

The protest doesn’t end there. Aaron said ETown Sunrise is not done organizing, and climate justice is a continued fight.

“This is our future and the future of our children that we are discussing,” she said. “We will not let this take the backburner.”