The Daily Explains: How years of advocacy led to new contract between Northwestern’s service workers and Compass Group 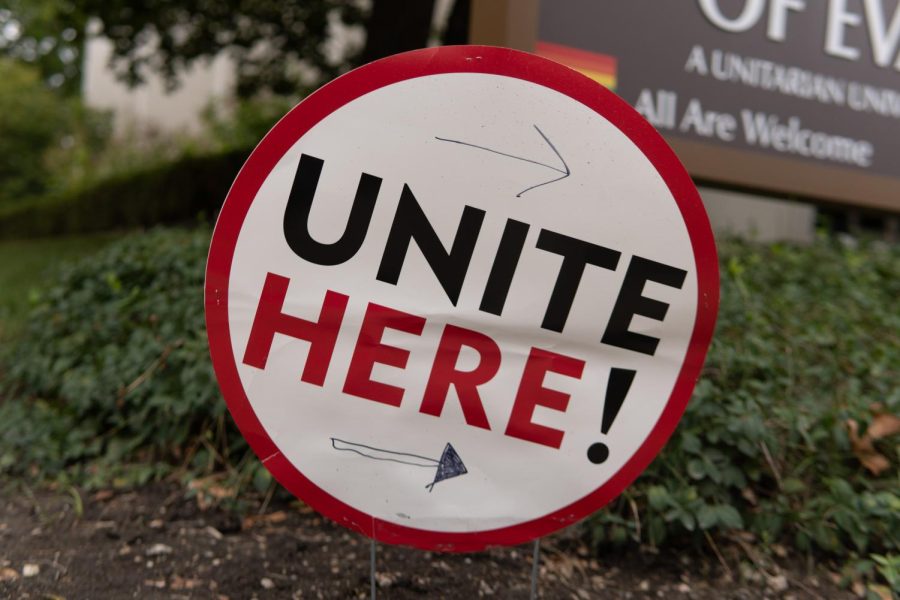 After more than two years of advocacy, Northwestern’s subcontracted dining and service workers voted Oct. 18 to ratify a new contract with Compass Group, the University’s food service provider. The road to ratification was marked with cycles of reported layoffs and uncertainty, the sporadic withdrawal of health insurance coverage and dangerous pandemic working conditions.

Workers advocated for better conditions alongside student supporters and union representatives through marches, petitions and discussions of a strike. The pandemic made their calls even more urgent.

Here’s a timeline of the key moments that led to last week’s agreement.

July 1, 2018: The University officially transferred its food service provider from Sodexo and Aramark to Compass Group.

The transfer happened after NU’s contracts with Sodexo and Aramark expired in 2018. In April, workers marched to present a petition to Sodexo and Aramark, their employer, asking for support during the transition.

That May, Compass reached an agreement with UNITE HERE Local 1, the union representing NU’s subcontracted service workers, to guarantee job security for Sodexo and Aramark employees during the transition. The union announced that Compass agreed to incorporate workers and maintain benefits like seniority and health insurance.

The agreement did not specify how long workers’ jobs would be retained or provide any details about the transition. The transfer officially occurred July 1 of that year.

Until last week, workers hadn’t received a raise since their contract expired, according to the union.

Mid-March 2020: Northwestern laid off hundreds of workers as campus shut down.

According to the union, the University laid off 320 sub-contracted workers without pay.

NU announced plans to continue paying workers and provide benefits in partnership with Compass despite the campus shutdown that quarter.

The University said the financial support would equal the pay and benefits that the roughly 600 food service employees typically receive when campus is open, according to a news release. The announcement came shortly after UNITE HERE Local 1 released a petition asking the University to keep paying employees rather than instituting layoffs.

But workers never received compensation or benefits, according to a later petition from Students Organizing for Labor Rights.

UNITE HERE Local 1 held virtual rallies on March 31, 2020 and April 30, 2020 urging NU to follow through on its commitment and pay subcontracted service workers, who were not included in the University’s plan to continue paying dining workers.

About 50 workers attended the rally, accompanied by graduate and undergraduate students.

In the union’s survey of 106 out of 357 Compass workers, 20% of those who were laid off said they couldn’t afford groceries. Workers had still not received the promised compensation from the University.

July 2020: Compass laid off about 230 employees who were on temporary layoff since March.

According to a news release, workers retained health benefits until September and were provided with information on how to file for unemployment or receive aid through the Coronavirus Aid, Relief and Economic Security Act.

Compass cited an anticipated decrease in the on-campus population in the fall as their reasoning.

Aug. 31, 2020: A proposal Compass agreed to in March to provide workers with health and safety protections expired without extension.

Compass had the opportunity to extend protections to workers before the start of the academic year, but chose not to. The loss of protections meant workers could face discipline for absences related to COVID-19.

September 2020: Compass laid off around 100 workers who had been recalled for Fall Quarter because of dining hall closures.

Following the University’s decision to preclude first- and second-year students from living on campus in fall 2020, NU opened fewer dining locations. Citing the closures as justification, Compass laid off around 100 workers who had been recalled from layoffs for Fall Quarter.

SOLR wrote in an Instagram post that more than 40 workers requested support in the form of basic necessities, such as rent and medicine. At that time, SOLR had already distributed mutual aid funds to more than 200 workers.

Sept. 10, 2020: SOLR released a petition asking the University to rectify their treatment of dining workers during the pandemic.

SOLR wrote in their petition that workers were bearing the brunt of NU’s last-minute decisions and “lack of transparency.” Students demanded that the University compensate workers for lost wages, provide health insurance to laid off workers and offer quarantine pay.

Workers and students delivered the petition to NU administrators on Sept. 16, 2020. The group walked to the Rebecca Crown Center and gave the petition to the office of Julie Payne-Kirchmeier, vice president for Student Affairs.

Sept. 30, 2020: Workers and students hosted a die-in to call attention to worker demands.

Participants lay on Sheridan Road by Deering Meadow for seven minutes and 28 seconds, one second for every person and family that depends on Compass to ensure health and safety on the job.

Compass extended health insurance contributions for laid off workers through that October, but the University did not respond to the petition’s demands.

January 2021: Northwestern announced it ended its 2020 fiscal year with a budget surplus.

Despite an anticipated revenue shortfall of around $90 million because of the COVID-19 pandemic, NU ended 2020 with a $83.4 million surplus.

Compass said in a news release it would provide workers with protective equipment and institute new safety measures for winter 2021. They cited the return of first- and second-year students for the decision to bring back workers.

May 31, 2021: SOLR marched with workers and union representatives in a Memorial Day rally.

About 100 people gathered at Weber Arch and picketed. UNITE HERE Local 1 representatives led one group of marchers around Allison Dining Hall and another through campus, past Norris University Center and stopped by the Kellogg Global Hub.

Protestors called for the University to raise workers’ wages to $19.88 per hour and asked for guaranteed access to weekly onsite COVID-19 testing.

September 2021: UNITE HERE Local 1 published the results of a survey of workers.

According to a survey UNITE HERE Local 1 conducted between June and August, about 88% of workers surveyed are not White. Dining workers are also over three times more likely than Evanston residents to have tested positive for COVID-19, according to the survey.

More than half of workers surveyed also said they do not make enough to pay their bills and can not afford healthy food for their families, according to the survey.

Sept. 22, 2021: Dining and service workers voted to authorize a strike from Compass.

In an effort to bring Compass back to the bargaining table, 95% of nearly 200 workers voted in favor of a strike.

Workers again demanded an increased wage and consistent health insurance coverage. Compass is required to pay full health insurance costs for eligible workers who work 30 hours or more per week, but according to the union, 74 out of 260 full-time employees had no coverage in February.

Compass’s previous offer would have provided all workers with an immediate $2 raise, a one-time ratification bonus and over 20% raises over the duration of the contract, but the union denied the offer without bringing it to a member vote, saying the offer would not provide a livable wage.

Workers started wearing buttons Sept. 29 that read, “I don’t want to strike, but I will.” SOLR collaborated with UNITE HERE Local 1 to distribute buttons to students reading, “I <3 CAMPUS WORKERS” to show support.

Oct. 1, 2021: Northwestern University Graduate Workers organized a demonstration at the Kellogg School of Management in support of dining and service workers.

Around a dozen graduate students gathered outside Kellogg and attempted to enter the building to speak with Compass workers and express their gratitude.

Officers from Allied Universal, a security company contracted by the University, initially prevented the graduate students from entering the building. When asked how NU hired Allied Universal and how it differs from University Police, University President Morton Schapiro told The Daily in a Friday interview, “I have no idea what you’re talking about.”

After about 20 minutes of negotiations, the security personnel escorted the graduate students inside the building through a back door,  NUGW Co-Chair Ph.D. candidate Julie Ming Liang said.

Oct. 18, 2021: Dining and service workers voted to ratify an agreement for a new contract with Compass.

Workers reached the new agreement Oct. 13, voting to ratify it on Oct. 18. The agreement included a minimum hourly wage of $19.88 and a permanent extension of health insurance benefits.

According to a union news release Compass opened 28 new job classifications at NU.