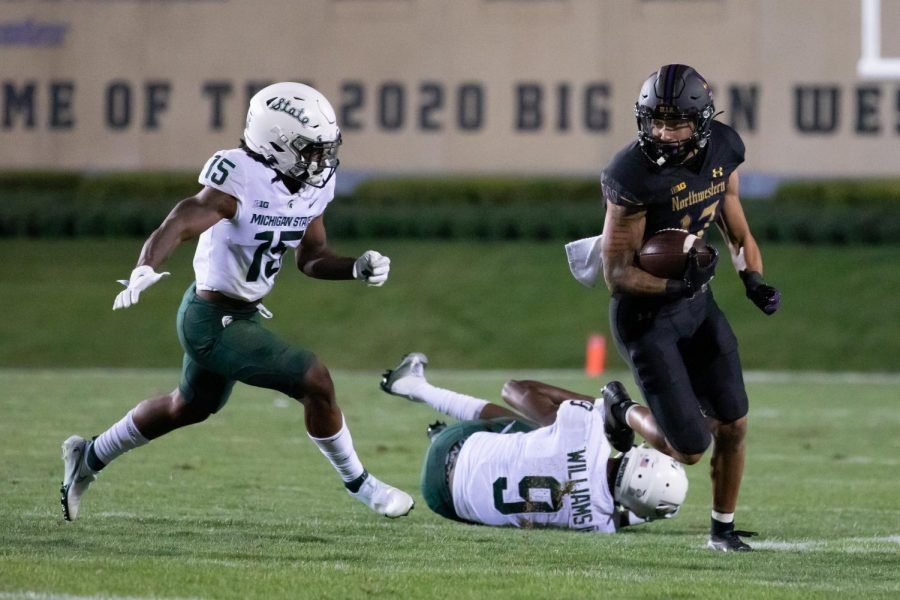 Bryce Kirtz runs after a catch. The sophomore wide receiver will miss the remainder of the 2021 season with an injury.

Listed as a starter on the projected depth chart for the game against the Wolverines, Kirtz was ruled out minutes before kickoff and he missed last week’s game against Rutgers. Jones was named a co-starter at Mike linebacker with sophomore Bryce Gallagher on the chart, but has not played since the Wildcats’ win over Ohio.

Last Sunday, Kirtz posted on Instagram “Cut short… but i’ll be back, best believe that.”

In five games, Kirtz caught 19 passes for 203 yards, including a team-high seven receptions for 80 yards in a season-opening loss to Michigan State. As a redshirt freshman in 2020, the Brownsburg, Ind. native reeled in six catches for 67 yards.

The Wildcats are now without two of three starting receivers from their Week 1 projected depth chart. Senior Berkeley Holman has yet to see action this season.

Jones recorded four tackles and a quarterback hit this season. Across eight games in four years, Jones has racked up seven takedowns.

The season-ending injuries are the Cats’ third and fourth this season. In August, sophomore running back Cam Porter and sophomore offensive lineman Zachary Franks suffered lower-body injuries that cut their 2021 campaign short.

— Football: Missed kicks, blocked punts turn the tide for Northwestern against No. 6 Michigan