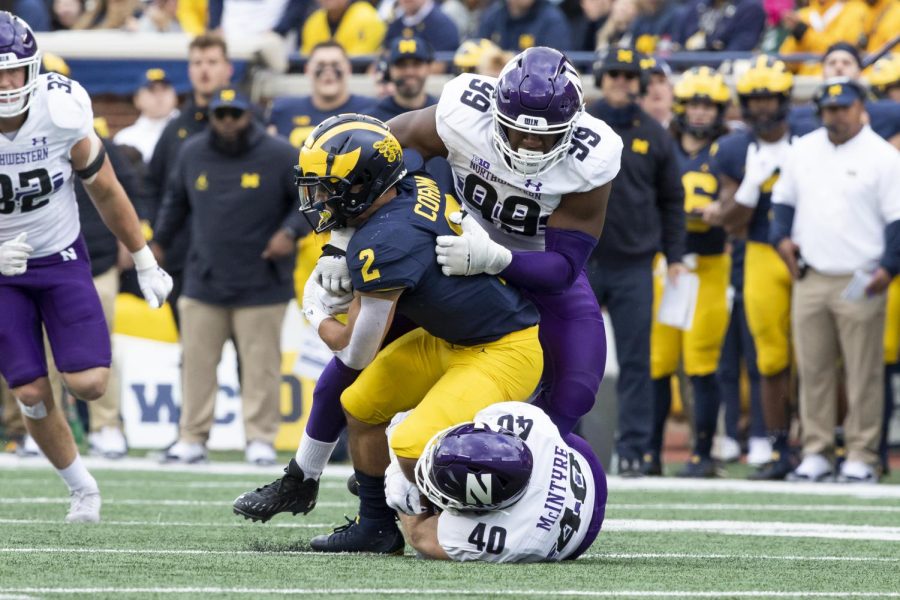 Michigan running back Blake Corum carries the ball against Northwestern. Corum gained 119 yards on 19 carries as the Wolverines ran away from the Wildcats 33-7 in Ann Arbor.

ANN ARBOR, Mich. — One running back has been hard enough for Northwestern to stop this year. First it was Michigan State’s Kenneth Walker, who cooked the Wildcats in their opener for 264 rushing yards and four touchdowns. Then it was Nebraska’s Jaquez Yant, burning NU for 127 yards on just 13 carries in the Cornhuskers’ 56-7 win.

Now, introduce two tailbacks into the equation. And factor in something else — both rank among the most skillful backs in the nation, averaging 101.7 and 82 yards per game, respectively.

No. 6 Michigan (7-0, 4-0 Big Ten) ran roughshod over the Cats (3-4, 1-3 Big Ten) on Saturday, winning 33-7 thanks to a virtuoso joint performance from running backs Blake Corum and Hassan Haskins. The pair combined to run for 229 yards and four touchdowns, accounting for a little over half of the Wolverines’ 457 yards of total offense.

“They’re the best rushing offense in the country for a reason,” coach Pat Fitzgerald said. “They got a great offensive line, really good tight ends, and they got a two-headed monster at running back that’s as good or better than anybody in the country.”

The tone for the afternoon was set on Michigan’s first two nondescript plays from scrimmage. Quarterback Cade McNamara handed the ball off to Haskins on the first, who picked up two yards. The next handoff went to Corum, who gained two more.

Corum and Haskins’ piecemeal approach wore down NU’s defense and set the stage for a steady stream of chunk plays. Haskins reeled off a 14-yard gain on the Wolverines’ second series before sophomore defensive back Coco Azema and sophomore linebacker Bryce Gallagher brought him down.

On Michigan’s third series, which ended in its first touchdown, Haskins took a handoff and was practically met by the entire Cats defense. He churned forward for 19 yards, however, to move his team into NU territory. Nine plays later, Corum was in the end zone and the Wolverines had a lead they wouldn’t relinquish.

“[Corum and Haskins are] great running backs,” graduate student Chris Bergin said. “We knew they were gonna break tackles. Team defense comes down to measuring the value of your defense based on how far you are from the ball when that whistle blows.”

The two drives Michigan conducted entirely within the second quarter relied almost entirely on the ground game. The first was a power-running clinic in which the Wolverines moved from the Cats’ 36-yard line to the four-yard line on seven consecutive positive runs of single-digit yardage — five by Haskins, one by Corum, and one by running back Donovan Edwards. It ended in kicker Jake Moody’s 20-yard field goal, which put the Wolverines up 10-0.

The second didn’t result in points, but drained two minutes right before the half and saw Corum rack up 40 yards on five carries. In the first half, Michigan possessed the football for 22 minutes and 54 seconds and ran 53 plays. The Cats ran just 19 plays in seven minutes and six seconds.

Ultimately, the Wolverines’ 86-55 advantage in plays run resulted in gaudy defensive statistics for NU (Bergin, Gallagher, Azema and sophomore safety Brandon Joseph all recorded double-digit tackles), but contributed directly to the Cats’ demise. By the game’s conclusion, even Michigan backup quarterback JJ McCarthy had chipped into the running game, scampering for 23 yards to start a drive that ended in Moody’s second field goal late in the third quarter.

“[The Wolverines] executed pretty darn well today, but we also helped them a lot in the second half with our tackling technique and not fitting gaps properly,” Fitzgerald said. “We’re just gonna keep coaching the heck out of those guys. I love them dearly and we’re gonna do everything we can to get our seniors into the postseason.”

— Football: Missed kicks, blocked punts turn the tide for Northwestern against No. 6 Michigan