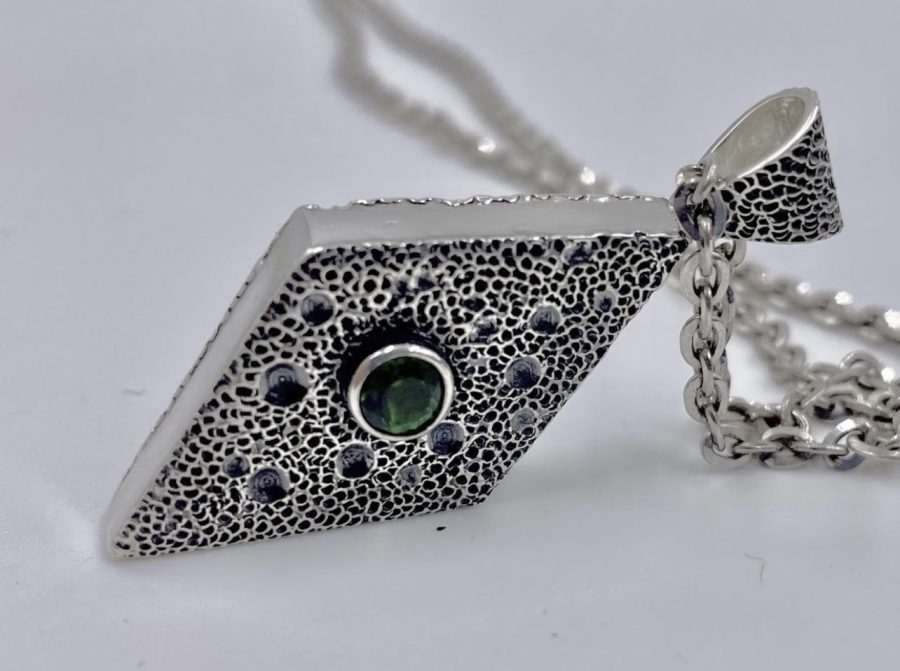 When he was 22 years old, Stephan Collins stumbled upon a beaded necklace at a jewelry stand in Phoenix, Ariz. Enthralled by the piece, he was quickly hooked on jewelry making.

Since then, the Evanston artist has learned the ins and outs of silversmithing while pursuing a career in drumming and teaching. He commited to silversmithing full-time six years ago after a few years off and has been designing jewelry ever since.

“I’d call my design technique intuitive,” Collins said. “I see these different images or something that strikes me that I want to incorporate into a design, and it all kind of develops.”

Collins works at Chicago-based Benches on Division. He spends his days teaching classes to aspiring jewelers and working on pieces to add to his nearly 50-piece collection on display in the studio’s gallery.

At 71 years old, Collins is the oldest member at the studio. He brings with him a traditional approach to metalsmithing, which includes doing all of his work by hand.

“Sometimes we tease him, because he won’t use anything that involves electricity,” Studio Owner Jeremiah Lee said. “At one point, he said he wouldn’t do any metalsmithing that he couldn’t do in a forest.”

Apart from his commitment to tradition, Collins brings a wealth of support and passion to the studio.

Lee said Collins has a “fatherly way about him” and looks out for the younger students.

“He’s been like the male equivalent of a den mother,” Lee said. “He’s always running around, checking in on folks, and giving them lots of help. It’s not uncommon for him to work with a single person for a couple hours, not even as a private lesson, but for free.”

It’s no surprise Collins found his way to art; growing up in Indianapolis, Collins was surrounded by an extended family composed of artists and musicians who he looked up to during his childhood.

Aside from art, Collins also harbors a passion for drumming, which he discovered while staying with a friend in Madison, Wisc. after he dropped out of high school. He started a family in Madison but struggled to find work, which led him to travel to California and Arizona via hitchhiking, then eventually back to Madison.

After he became interested in the craft while in Arizona, Collins said he began frequenting his friend’s silversmithing studio in Madison.

“When I saw what my friend was doing, I knew I wanted to do it,” Collins said. “I hung out, asked questions and watched. I had no formal training at all.”

After a year, Collins began selling his own brass jewelry near the University of Wisconsin-Madison’s campus and worked nights performing African drumming. Soon, his night gig replaced his jewelry career when he landed a job teaching drumming full time at SUNY Brockport in 1988.

Collins found his way back to the midwest in 2003, and six years ago he got back into making jewelry by joining Benches on Division.

Stephan’s son Kwabena Collins said he was not surprised when his father returned to jewelry making.

“He’s amongst his ‘real people,’ who can all speak the same language and form a kind of community,” Kwabena Collins said. “He’s an older man, but also a very young man at the same time, so I was happy he was staying active.”

Collins said his next big project is learning a flush mount — placing a stone which has no visible holding system, so the stone looks like it’s floating.

Ultimately, he sees his return to silversmithing as “a phoenix moment,” Collins added.

“Everything just came together so I could get back to smithing,” he said.