Volleyball: Wildcats battle both opponents and fatigue to split four-game away stretch 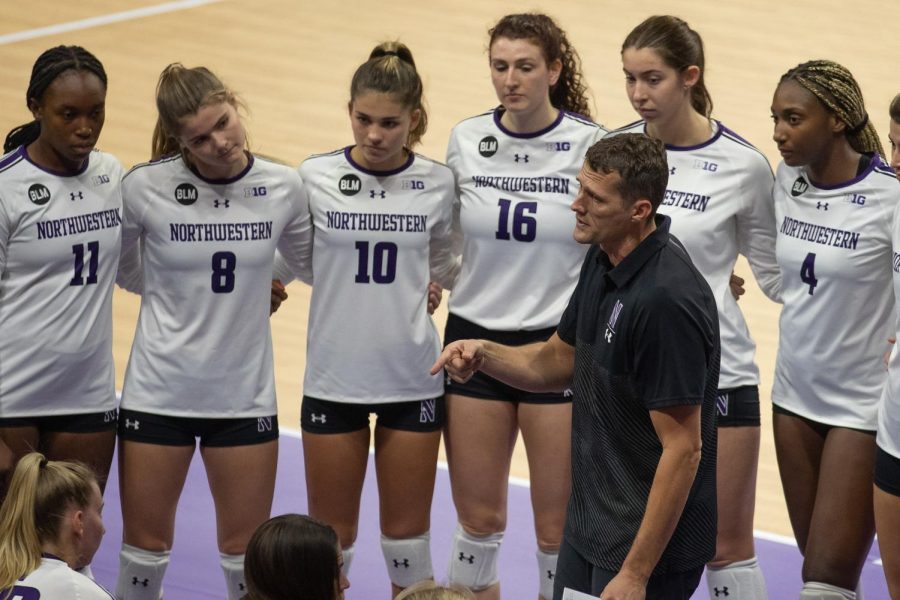 The Wildcats huddle around coach Shane Davis. NU won two of its four games on its lengthy road trip and now stand at 3-5 in Big Ten play.

The Big Ten volleyball slate is a gauntlet every year, pitting some of the nation’s top ranked teams against each other in a packed schedule.

When Northwestern rode out of Evanston two weeks ago for a road trip spanning eight days, four games and multiple time zones, what initially looked like a difficult stretch became even more grueling. The Wildcats (8-11, 3-5 Big Ten) returned home with two wins and two losses to show for their efforts, and most improbably, are still going strong.

“We are right there and the league is so good this year,” coach Shane Davis said. “It has impressed from top to bottom and is more compressed than it’s ever been.”

NU’s four-game stretch kicked off with a commercial flight out of Chicago to the East Coast for weekend games against Maryland (15-5, 3-5) and then-No. 13 Penn State (13-5, 6-2) on Oct. 8 and 9, respectively. Then, a return home for a couple of days of practice and another flight to Minnesota (11-5, 6-2) for a midweek contest against the then-No. 12 Golden Gophers.

A Saturday evening match against Iowa (2-16, 0-8) in Iowa City marked the end of the road games. But while the Hawkeyes rank last in the Big Ten, even that contest was no sure thing. Intentionality and attention to detail became priorities to ensure the Cats could finish with energy still in the tank when Saturday rolled around.

“It’s just fragile, right,” Davis said. “You just have to be careful on what you’re doing, you’ve got to be really specific on what you need to get better at.”

NU couldn’t knock off either ranked teams, but took care of business against Maryland and Iowa for its second and third Big Ten wins of the season. The Cats’ first away game came down to the final set, and all three of NU’s set victories came via two-point margins: 25-23, 25-23 and 17-15.

After picking up just one set victory across its matches against Penn State and Minnesota, the Cats summoned the energy to rout Iowa on Saturday, winning all three sets in front of the Hawkeye crowd.

Aside from the action on the court, Davis and the Cats had to balance an impossible assortment of factors: travel logistics, COVID-19 guidelines and ample time to recover and practice. And if that wasn’t enough, NU’s players faced another formidable opponent — Northwestern course loads and midterms.

“What I’ve been telling the freshmen is trying to just stay on top of your stuff,” senior libero Megan Miller said. “When we have Sundays off, I try to get all of my homework done for the week, and then when I’m on the road, still making sure that I have everything turned in on time and really communicating with my professors.”

The challenge of four straight road games brought out the best in redshirt junior middle blocker Tatyana Hardwick, a reserve to start the season who has emerged as a crucial contributor in the starting lineup.

In NU’s straight-sets victory against Iowa, Hardwick finished third on the team with seven kills and led the Cats with four blocks. The match marked the fourth time this month that she has finished with seven or more kills, after not having hit the mark in any of her previous seasons in Evanston.

“Tatyana is doing a heck of a job offensively for us,” Davis said. “She can hold her own with anybody and we’re seeing some great growth with her.”

The new role has been a change of pace for Hardwick, a vocal presence on the sidelines who was thrown into game action after injuries hit the Cats’ midcourt positions.

“In the past, I’ve had a big impact on the bench and being loud for my teammates,” Hardwick said. “I really want to score my teammates as much as I can.”

The Cats will break their streak of away games with a home contest against in-state rival Illinois on Wednesday. NU took the Fighting Illini to five sets in the team’s earlier matchup in Champaign. If the Cats win this match and roll past Iowa again on Saturday, they will sit at .500 in Big Ten play by the end of this weekend.

Whether it’s the much-needed rest or anticipation of a raucous home crowd at their backs, NU’s players are convinced they’ll have an energy boost when they return to action at Welsh-Ryan Arena.

“We’re excited to be back,” Hardwick said. “We’re just coming in with a lot of energy, and hopefully pulling out two more wins.”