Getting out of the Northwestern and Evanston bubble: Students talk living in Rogers Park 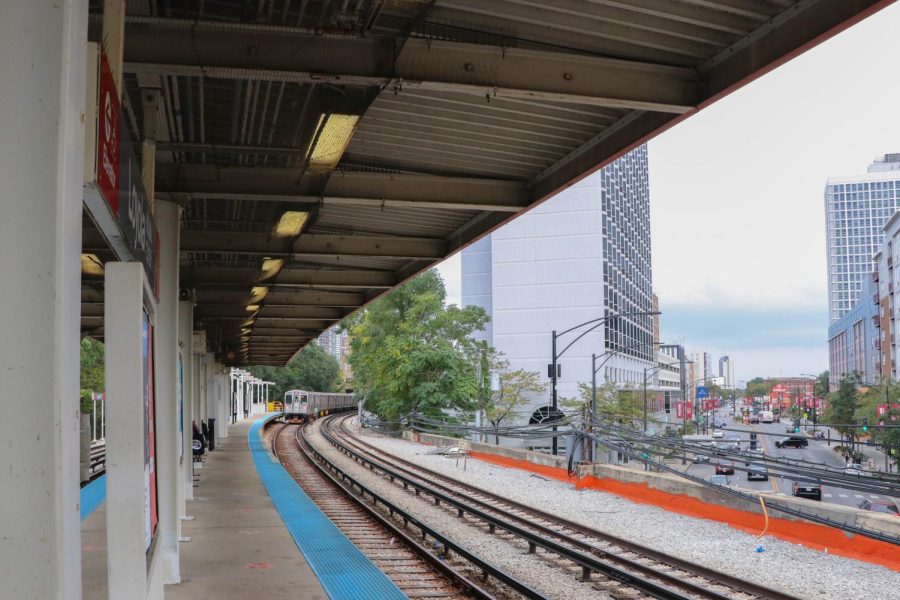 The Loyola CTA station. Upperclassmen living in and commuting from Rogers Park to campus every day say their location allows them to be intentional about creating a work-life balance that better fits their changing needs.

This winter, Communication senior Carly Griffin-Fiorella and their roommate, Medill senior Avery Adams, started to feel “a bit choked” living in their off-campus housing in Evanston.

“I had gotten to a place where not being in Evanston all the time felt like a good idea,” Griffin-Fiorella said.

By the spring, the roommates had moved into an apartment in Rogers Park. Now, they are among a handful of Northwestern upperclassmen who commute to campus from Rogers Park, a 20-minute CTA ride south of campus.

Griffin-Fiorella said they don’t regret moving out of Evanston. She only goes into campus for classes and club activities, usually commuting on the CTA Purple Line. Most weekdays, they board at the Howard Street CTA station at 11 a.m. and return at 10 p.m.

“I feel like I get to go to school (now), versus ‘I am of the school,’” Griffin-Fiorella said.

The balance of living closer to the city and having the opportunity to explore while still being able to visit friends and attend events on campus is what drew Griffin-Fiorella to the idea of commuting.

“The commute doesn’t necessarily bug me that much,” Griffin-Fiorella said. “It’s so nice to have access to a space that’s not just the Northwestern and Evanston bubble that Northwestern has eaten away at.”

Echoing their roommate’s sentiments, Adams said they work in Lincoln Park, they said they never felt like they fit in on campus or in Evanston when they lived in the dorms and off-campus housing. Instead, they wanted to spend more time getting comfortable around Chicago.

Adams said their priorities have changed since arriving on campus as a first-year, especially regarding what they want in a living space. Instead of defining their entire identity as “student,” they now feel they are someone who has the opportunity to attend classes while being intentional about when they want to go to campus.

“I’d much rather have my home, comfort and community outside of the community of Evanston,” Adams said.

To separate school from other parts of their life, Adams said they only go to campus every Tuesday, Wednesday and Thursday.

Living away from campus comes with its downsides, though. Because the CTA Purple Line is often unpredictable and shuts down between 1 and 2 a.m., the roommates said they sometimes have to stay over at friends’ houses or take rideshares back to their apartment late at night. However, they both agreed that for them, the pros outweigh the cons.

SESP senior Elizabeth Curtis, who moved to Rogers Park with their partner this fall, said Evanston’s high rent was the deciding factor. Because they’re graduating in December, Curtis said it also made sense for them to transition into post-graduate life by moving out of Evanston.

“Even though I feel like it’s worth it setting myself up for the next part of my life, commuting is really difficult,” Curtis said. “Being further away, it’s not possible for me to come home in the middle of the day. Having to pack an entire day’s worth of food is a much bigger consideration. If I forget my computer charger, it’s a much bigger inconvenience.”

Curtis is a fifth-year senior, so most of their friends have already graduated. Because club meetings are usually in the evening, and they return home after class, they are unable to attend.

However, they said they still have a strong community on campus through the relationships they have formed with NU students over the past few years.

“In a way, I do probably have the same connection I felt being near campus all throughout the pandemic when students weren’t here,” Curtis said. “For me, (living in Rogers Park) is worth it, especially because I will be done in six weeks.”