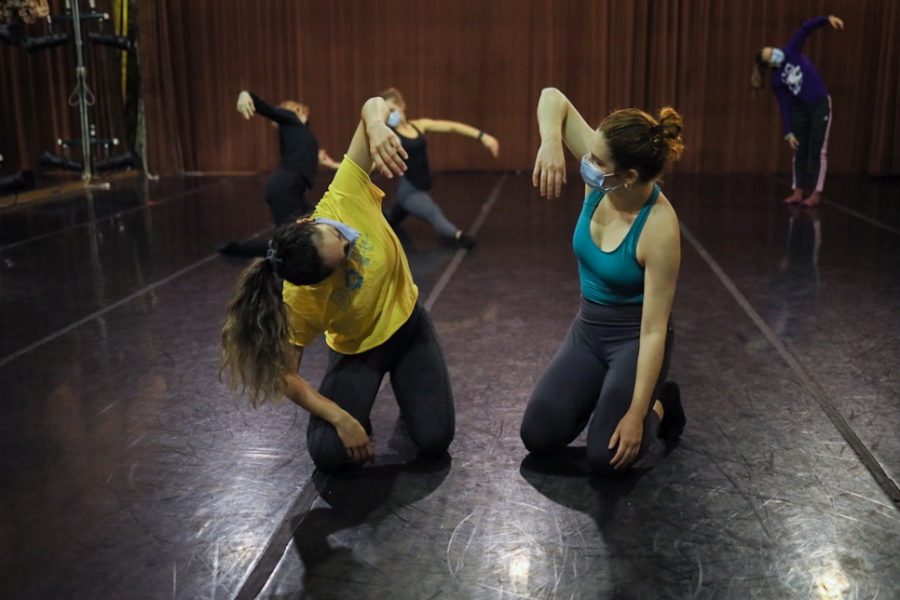 Attendees can witness students actively work on choreography in the 18th exhibit.

In-person theatre performances are back at Northwestern — and the Virginia Wadsworth Wirtz Center for the Performing Arts spent the weekend celebrating.

The Wirtz Center hosted “Open House: a Weekend for the Arts at Wirtz” from Friday to Sunday. The event ran for two hours at a time and featured 21 rooms, providing a behind-the-scenes glimpse at NU performances. Some upcoming shows were highlighted alongside others that were exclusive to the event, giving attendees a look at elements of the theatrical creative process such as table reads, rehearsals, lighting displays, soundscapes and more.

Communication sophomore Craig Carroll took part in a table read for the play “Flesh & Blood” during the event. He said he didn’t enjoy the short rehearsal process and low commitment level at first, but ended up appreciating how the show reintroduced him to performing in-person.

“It was a really nice welcoming back (to in-person theatre),” Carroll said. “I haven’t had the experience of bonding with people over a script or performance in so long, (so) it was kind of fascinating to see how quickly we were able to become friends with each other, and I loved that.”

During the rehearsal process, Carroll and fellow cast members all said one thing they missed about theatre when they introduced themselves. Carroll remembered walking out of rehearsal with friends and family, and he said others mentioned the smell of a theater or the adrenaline rush from performing — small experiences that contribute to the sense of community created through in-person performances.

Carroll said the script reading lasted around an hour and 45 minutes during the event, and the cast filled the remaining 15 minutes with conversations about scenes or rereading scenes they particularly enjoyed.

Kelly Helgeson, Wirtz Center’s associate managing director, worked with Production Manager Heather Basarab and Directors Detra Payne and Scott Weinstein while developing the event. She said the group was instrumental in coming up with a “cool vision” for the event.

Some students also assisted the production team. Communication sophomore Ryan Nguyen was an associate producer for the event, helping with everything from making graphics to creating contact sheets to speaking with patrons. He said his experience was especially meaningful because it was his first production with Wirtz.

“This was honestly the best introduction to Wirtz,” Nguyen said. “I met so many people — MFA designers, directors, marketing people, anyone and everyone. Everyone who works (at) Wirtz was coming together to put on this open house.”

The event featured students from both the theatre department and the Department of Radio, Television and Film. Helgeson said highlighting the different departments was “really exciting,” since the Wirtz Center mainly works on productions with theatre majors. She said she hopes the weekend’s events will lead to more cross-department collaboration in the future.

Nguyen said he especially liked room 12, which was hosted in the Ethel M. Barber Theater. Inside the room, audience members stepped into the shoes of actors who were late for a production and pulled onto the stage to perform different actions like jumping or dancing.

“It was cool for audience members to get a feel for what actors experience,” Nguyen said. “I heard one girl come out and she said, ‘I want to perform at Northwestern (now). That was so fun.’ That was a really cool moment and a cool opportunity for the audience.”

While the planning process was hectic, Nguyen said he enjoyed being part of the process and looks forward to the event potentially returning next year.

“Overall, it was a big success, and audience members kept saying how excited they were to be back and what they’re looking forward to this year,” Nguyen said. “We’re looking to hopefully do this every year.”

— How to navigate the Northwestern theater scene