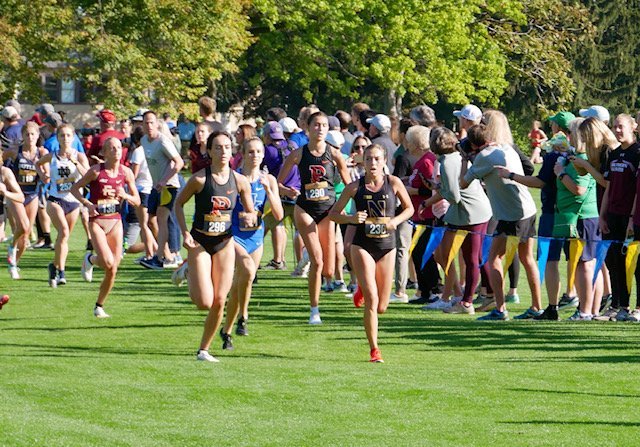 After a disappointing showing at its last meet, Northwestern rebounded at Friday’s Penn State National Open, finishing third among 16 programs in State College.

The Wildcats performed well at the event, placing three runners in the top 10 of the Women’s 6K race on the course where the Big Ten Championships will be held later this year. This showing comes on the heels of the team’s disappointing result at the Joe Piane Invitational earlier this month, where NU finished 24th out of 25 teams.

Coach Jill Miller said while the Cats’ performance wasn’t perfect, she was proud of how the team came back following the invitational.

“We made some major errors out there,” Miller said. “I’m excited that we’ll be able to clean those up before the championship the following friday.”

NU placed third overall with 109 points, falling behind No. 8 ranked Michigan and unranked Georgia Tech, which received votes in the most recent Coaches’ Poll. The Cats finished second out of all Big Ten competitors, triumphing over host Penn State, Rutgers and Maryland.

Graduate student Lotte Van der Pol, junior Kalea Bartolotto and senior Rachel McCardell all placed in the top 10 of a field with over 150 runners. NU was the only team besides first-place Michigan to attain this result.

McCardell, NU’s third runner at Penn State, said the team was pleased with its performance, but felt the Cats “have a lot more there.”

Van der Pol finished sixth with a time of 21:10, crossing the line as NU’s first runner and achieving her highest finish this season. She believes there is area for growth in her individual performance but is looking forward to running the hilly course again at the Big Ten Championship.

“(This was) certainly a nice breakthrough for Lotte,” Miller said of Van der Pol’s performance. “I’m really proud of her (race) execution.”

Bartolotto and McCardell came in seventh and 10th, respectively, with times of 21:12 and 21:16. Sophomore Katherine Hessler and senior Hannah Hall rounded out NU’s top five, placing 43rd and 46th.

“It was definitely the hardest, hilliest, most brutal course we’ve been on in my memory of racing at Northwestern,” McCardell said.

The Cats have not seen the last of the Penn State Blue and White Golf Courses. They will return for the Big Ten Championships in a couple of weeks on Oct. 29. A main objective of the race this weekend was to gain experience with the course ahead of that pivotal meet, McCardell said. In that sense, she believes the Cats accomplished what they intended to do.

As NU looks to the postseason, Miller compared the adrenaline rush of the weeks ahead to the excitement surrounding the holidays.

“I always say that championship season is like Christmas morning and it’s something we get really excited for, just like a kid would to run downstairs and see what presents are under the tree,” said Miller. “This is what we’ve been working so hard for. Excitement levels are high.”