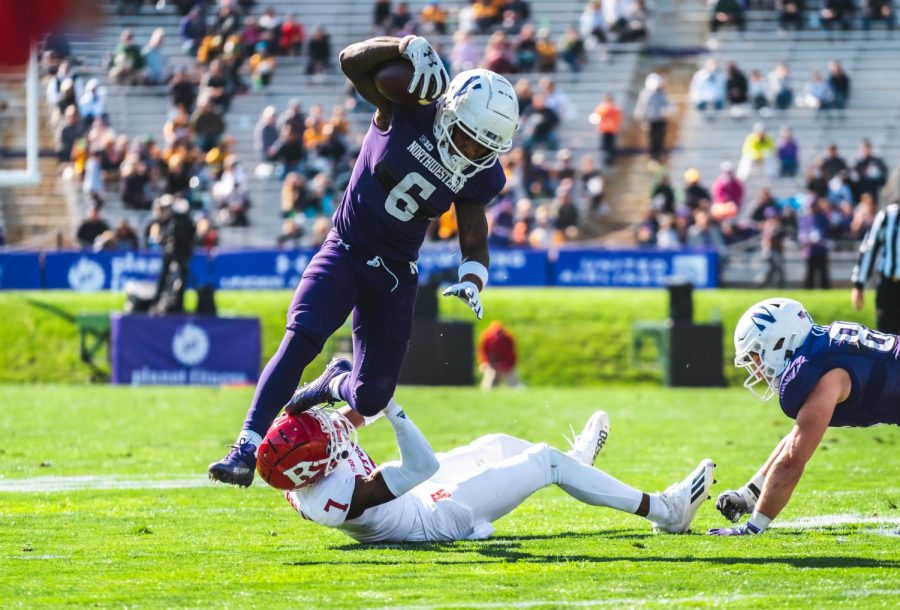 During a press conference on Monday, sophomore quarterback Ryan Hilinski expressed the importance of having fun while playing because ‘it makes the weeks easier.’

NU hit on multiple cylinders in the two-score victory, including the connection between Hilinski and the Cats’ wide receivers. The South Carolina transfer threw for 267 yards and two touchdowns, his most yards since November 11, 2019 and the program’s most since quarterback Peyton Ramsey threw for 291 yards in the 2021 Citrus Bowl against Auburn.

“Any game a quarterback wins, I’m pretty excited about,” coach Pat Fitzgerald. “He played great but I know he’s nowhere close to being satisfied.”

The Cats’ entered the game without sophomore wide receiver Bryce Kirtz — the team’s second-leading receiver. But that didn’t stop Hilinski from spreading the love.

Headlined by graduate wide receiver Stephon Robinson Jr.’s five catches for 115 yards, including a 47-yard reception to start the game, five of Hilinski’s connections resulted in 20 or more yards. With three of the passes completed to Robinson Jr., the Los Angeles native picked up his second consecutive game over 100 receiving yards, the first one for an NU player since Flynn Nagel in 2018.

One of the other 20 yard-or-longer receptions was junior wide receiver Malik Washington’s 64-yard touchdown in the first quarter. The wideout finished with 84 yards.

“We make the plays in practice so that we are able to make them on Saturday,” Washington said. “It feels good getting the opportunity to showcase what I can do, and I think we’ll just continue to build on that as a team, as an individual, and as a coaching staff.”

The offense pivoted away from the pass game in the second half, rushing 29 times to seven passes. However, the impact of the aerial attack was crucial in NU’s win. With two of the three touchdowns coming through the air, the offense averaged 14.8 yards per completion.

Hilinski spoke of the importance in building relationships with his teammates and coaches, especially in the wide receiver room before the season. Playing around ‘a bunch of ballers’, he said the season’s progression will only strengthen the group’s confidence.

“It’s just a great feeling for us to go out there and play football,” Hilinski said. “Preaching that they can trust me and that I’ll get them the ball and then actually being able to deliver today to them, I think it will just continue to grow as we move forward in the season.”

Entering the season, NU took the field without its starting quarterback, running back and wide receiver group from the 2020 season. However, Hilinski and the new group of targets are beginning to fall into sync, connecting for 195 yards against Nebraska and now 250 versus the Scarlet Knights.

With comfortability continually growing amongst the pass catchers and the quarterback, the more time the group receives to mesh, the better the offense will look in hopes of securing additional Big Ten wins.

“Spreading it out a little bit, we’re going to need to continue to do that,” Fitzgerald said. “When you’re a new quarterback and you’re working with new receivers, the timing and all that just takes reps, it takes preparation, and the guys are working really hard to get it where it’s kind of clicking.”