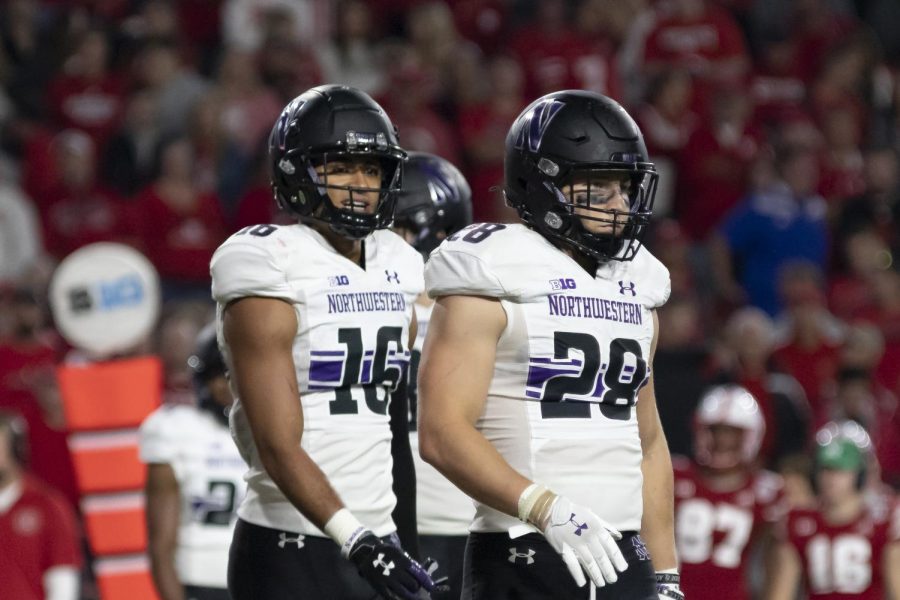 Brandon Joseph and Chris Bergin survey the field in between plays. Northwestern’s defense is looking to recover from a 56-7 loss to Nebraska, in which it gave up 657 total yards.

There was a time not long ago when Rutgers was synonymous with futility in college football.

The Scarlet Knights were the team every Big Ten squad looked forward to playing. In 2016, they were outgained 605-39 in a 78-0 loss to Michigan. In eight all-time meetings with Ohio State, the fewest points they’ve given up is 49. The only justification for Rutgers’ presence in the Big Ten seemed to be the almighty New York metropolitan area television revenue it provided.

But things have changed for Northwestern’s homecoming opponent. Under coach Greg Schiano in his second stint leading the Scarlet Knights, Rutgers has taken tentative steps toward respectability. They started 3-0 and scared the Wolverines in a 20-13 loss on Sept. 25. Two more losses to the Buckeyes and Michigan State followed, but Rutgers (3-3, 0-3 Big Ten) has a chance to right the ship against a Wildcats (2-3, 0-2) team smarting from a 56-7 road defeat against Nebraska.

“Rutgers is playing really good football,” coach Pat Fitzgerald said. “Greg (Schiano) and I are very good friends; I’ve got so much respect for him and he’s doing a great job.”

Sophomore quarterback Ryan Hilinski expressed confidence in NU’s focus despite the arduous conference slate ahead. He drew on his experience at South Carolina, where he routinely played in some of college football’s toughest environments.

“I came from the SEC,” Hilinski said. “Week in and week out, we played Bama, then we played Florida, then we played Tennessee. The biggest thing we have to do right now is to make sure we stick to our training.”

After three home games and a sparsely-attended trip to Duke, the Cats were thrust into the fire in their conference road opener. Before 87,364 in Lincoln, the Cornhuskers battered NU to the tune of 657 total yards — 427 of which were gained on the ground. The 56 points the Cats allowed represented the highest point total for an NU opponent since Nov. 27, 2010, when Wisconsin beat the Cats 70-23.

“My play is not where it needs to be,” graduate defensive lineman Jeremy Meiser said. “I need to control the line of scrimmage better, my pass rush needs to be better… Those are the things I’ve been working on the most.”

The offense struggled in Nebraska, rushing for a season-low 37 yards. Though Hilinski threw for 256 yards and the game’s only touchdown, NU was able to muster little else as the Cornhuskers cruised to an easy win.

Fitzgerald called the Cats’ bye week “productive,” noting that the team had “some really competitive practices” before his staff fanned out across the region and country over the weekend to recruit high school athletes. The last time NU had a scheduled bye week was in 2019, when it had two. The Cats’ first games back that year had decidedly different results: They won the first 30-14 over UNLV and lost the second 52-3 to the No. 4 Buckeyes.

“There’s a lot of pressure on us to be able to execute a lot better than we did in Lincoln, and give ourselves a chance to win a football game,” Fitzgerald said.

— Football: Northwestern and Hilinski’s Hope team up to break down mental health stigma