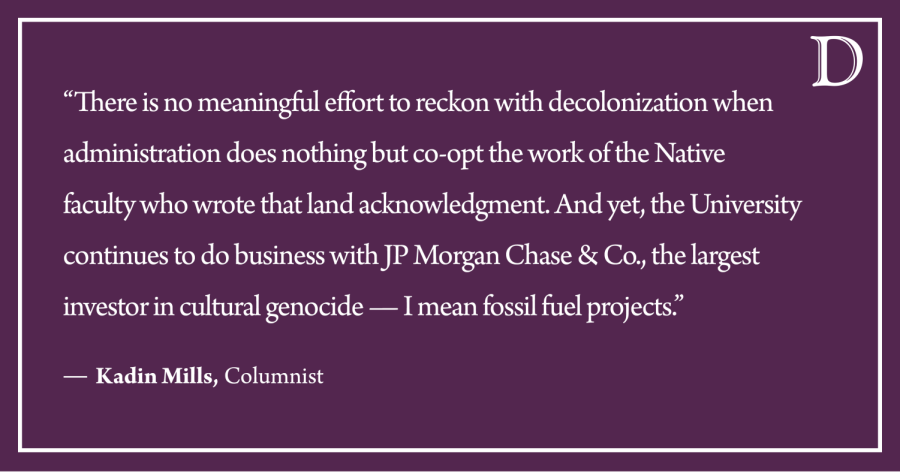 You’re sitting on an inbound Red Line CTA train toward the Loop, when a group of about 50 Natives board the train. It is a scene you have probably never encountered — a large group of young urban Natives, clad in regalia and traditional styles interacting with society at large.

That is a situation many visibly uncomfortable Chicagoans faced on Oct. 2 as Indigenous students from across the so-called United States assembled in Chicago to participate in the Whose Lakefront project. This public art project outlined the struggle of decolonial thinking and indigenization that Natives face in cities like Chicago, which is home to one of the largest urban Native populations in the country.

Indigenous peoples and strong allies convened at the south end of Grant Park to draw a line of red sand nearly 1.5 miles long, marking the unceded territory of the Pokagon Band of Potawatomi Indians. From Grant Park, we traced this border to the former site of Fort Dearborn and held ceremonial space on the riverwalk. A mural on the other side of the Chicago River read: “You are on Potawatomi Land.”

In 1833, 21 years after the Battle of Fort Dearborn, Chief Leopold Pokagon signed the Treaty of Chicago, ceding 15 million acres of land including Zhaagagong — the land we know today as Chicago.

Chicago extended its land base eastward in 1871 by shoveling debris from the Great Chicago Fire into Lake Michigan. In 1914, the Pokagon Potawatomi Business Committee filed a lawsuit in federal court, claiming the waterfront east of Michigan Avenue belonged to the tribe. The committee noted the land was human-made and not included in the Treaty of Chicago. The case was decided in 1917 by the Supreme Court, which sided with the city of Chicago. Following the decision, tribal attorney Jacob Grossberg wrote, “The Court proceeded to do the politically expedient thing and weaseled out by asserting that the Indians had ‘abandoned’ the land by not using it… the law was with me but the Court was against me.”

Land Back is a movement aiming to return Native lands to Native peoples. While the Whose Lakefront project brought together hundreds of Natives and allies to indigenize the Loop, there was no action transforming this solidarity and indigenization into decolonization. Until we reckon with these facts, movements and displays of visibility and solidarity with BIPOC will continue to be just that — displays.

A perfect example is the regurgitation of the same, tired land acknowledgment at Northwestern. You have heard it: “The Northwestern campus sits on the traditional homelands of the people of the Council of Three Fires…” Yada yada yada. As a contemporary Ojibwe youth, the visibility is nice. But that’s all it is. There is no meaningful effort to reckon with decolonization when administration does nothing but co-opt the work of the Native faculty who wrote that land acknowledgment. And yet, the University continues to do business with JP Morgan Chase & Co., the largest investor in cultural genocide — I mean fossil fuel projects. The corporation invested $269 billion in the fossil fuel industry between 2016 and 2019. Despite this, we will continue to do business with this world power as long as we employ trustees like Virginia Rometty (McCormick ‘79), who also serves on the JP Morgan Chase Board of Directors, to manage the University’s $14 billion endowment.

Despite this, the word “decolonization” is thrown around at places like NU. But what is the difference between decolonization, indigenization and, more broadly, equity?

The neoliberal is quick to slap the decolonial label on just about anything, from mere recommendations on reform and injustices to divestment campaigns and abolitionist movements. While these are some of the most valuable social movements of recent history, the issue is not the campaign, rather the lack of action and outside understanding where these movements are concerned.

The thoughtless repetition of our land acknowledgment and the creation of institutions such as the Center for Native American and Indigenous Research are often mistaken for acts of decolonization. These are simply ways to start thinking of decolonization from within the colonial structure. To critique these is not to discredit the important work they do, but the reality is that none of the instances mentioned above work to actively decolonize. A divestment campaign alone is not an act of decolonization without meaningful input from Black and Indigenous peoples on the structures of reinvestment. A land acknowledgement means nothing until the land is returned. Alone, these acts work instead to disrupt current colonial systems without putting thought into the structures that will replace them.

In the United States, groups have been pushing for acts of colonial destabilization for decades, even centuries. Decolonization is not a metaphor, but means creating a new structure to replace the existing outdated one. Decolonization means land back, while also returning governance to Indigenous leaders and recognizing the sovereignty of Native Nations. We cannot establish an equitable society within the colonialist structures by which we are currently bound. But, we must realize and emphasize the next step — that is, outlining and establishing the ways in which a society must function sustainably in every sense of the word.

Kadin Mills is a Medill sophomore. He can be contacted at [email protected]. If you would like to respond publicly to this op-ed, send a Letter to the Editor to [email protected]. The views expressed in this piece do not necessarily reflect the views of all staff members of The Daily Northwestern.