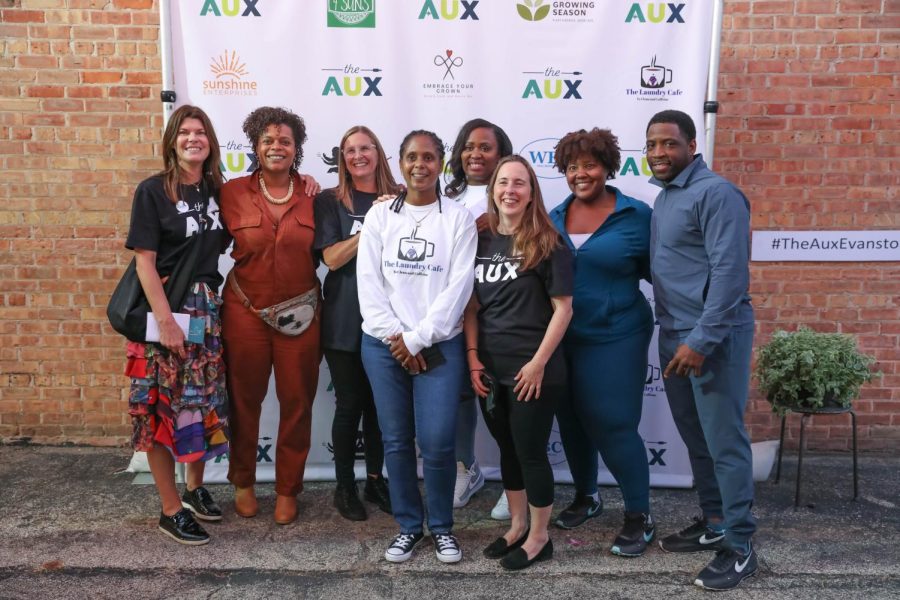 The AUX co-developers. Lori Laser (left) and Jacqueline White (center) are hoping that the commercial center uplifts Black business owners and a sense of community.

A brand-new hub for start-ups and small businesses centered around uplifting Black entrepreneurs is coming to Evanston, with developers hoping to open the space next fall.

The AUX highlights intersections between commerce and community. The commercial center is dedicated to healing, wellness and racial equity by and for the community, according to the project’s website. It will be developed at the intersection of Pitner Avenue and Washington Street in the 2nd Ward.

The Growing Season, a community wellness nonprofit organization founded by Glencoe resident Lori Laser, helped spearhead the idea. Laser said she was looking for ways to expand wellness resources for residents, which led to the creation of the AUX.

“What if the economies we create have social impact?” Laser asked. “Not only financial but (through) a lens of ‘how does this impact others?’”

Laser had a plan, but she needed to find partners to help execute it.

Jacqueline White is a co-developer of the AUX and co-owner of the Laundry Cafe who grew up in Evanston. As she looked around at her community of the historically Black 5th Ward, she realized how many resources aren’t available.

She and her business partner decided to explore the possibility of starting a laundromat that would also function as a cafe and community center as residents passed time there. But they struggled to find available property in the 5th Ward and could not get a loan to fund the business.

“We’re both Black women, good credit, been on our jobs 20 years,” she said. “It seems like we would be able to get a loan. But we’re getting tripped up in the system.”

Laser and White crossed paths in summer 2020. Now, the Laundry Cafe is set to be one of the AUX’s tenants.

Ald. Peter Braithwaite (2nd) said he expects the project will do well.

“It checks all the economic factors,” Braithwaite said. “I love the vision and the collaboration they’re all doing to envision these businesses… I think (it) will help to accelerate the growth of Black businesses in town.”

Braithwaite also said he thinks the AUX will generate some retail taxes and new jobs. The Growing Season estimates at least 30 jobs will be created through the project, according to its website.

As of now, the AUX is still in the fundraising stage. But White said the company hopes to begin construction by the end of the year to be on track for its fall 2022 opening goal.

Laser said the building, once completed, will be sold back to the community. The plan is to have up to 50 community members at a minimum of $1,000 apiece co-own the space, she said. With this ownership structure, Laser said she hopes the community will be invested in the building’s success.

For White, this project is more than just the start of restoring the Black business scene in Evanston. Its benefits are endless, she said.

“The project is not only good for entrepreneurs of color,” White said. “We want to keep bringing people in and giving them our resources. It’s a project that continues to give and there are so many ways the whole community benefits.”

— From jerk to barbecue, black business owners feed Evanston and support each other

— A list of Evanston black-owned businesses you can support