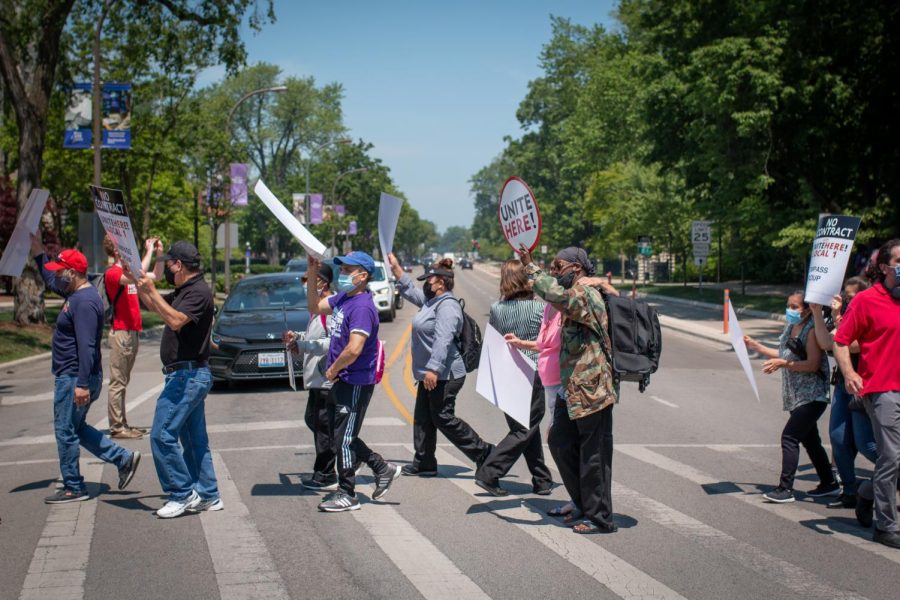 Compass Group workers and their families protested alongside SOLR members in a Memorial Day demonstration.

Committee leaders from UNITE HERE Local 1, the union representing NU’s subcontracted service workers, will bring the proposal to members for a ratification vote shortly. More details will be released when workers vote to ratify the contract, Union Organizer Dan Abraham said in an email to the Daily.

Dining workers voted Sept. 23 to authorize a strike with 95% support. Workers have negotiated with Compass for over two years to meet their demands, including guaranteed health insurance coverage and a wage increase to $19.88 per hour.

Since the start of the pandemic, workers’ demands have also included backpay for wages lost while laid off and fair attendance policies for working during the pandemic.

In an email to The Daily, University spokesperson Jon Yates said NU hasn’t been part of any negotiations, which occurred strictly between Compass and the workers. The Daily asked whether the University plans to support workers in the future, and spokespeople did not respond.

“The associates represented by the union are vital members of the Northwestern community, and Compass has been a trusted partner to the University,” Yates wrote. “We are thankful that an equitable resolution appears to have been reached.”

In a statement emailed to The Daily, Compass responded only that they reached an agreement with the union and will release more details once workers vote to ratify the agreement.

According to a survey UNITE HERE Local 1 conducted between June and August, 58% of respondent dining workers said they didn’t have enough money to pay their bills and 53% said they couldn’t afford healthy food for their families. According to the union survey, 74 of the 260 active, full-time Compass workers didn’t have health insurance in February.

Dining workers are also over three times more likely to have tested positive for COVID-19 than Evanston residents on average, according to the survey.

Workers began wearing buttons Sept. 29 that read “I don’t want to strike, but I will.” Students have been showing support with buttons reading “I <3 CAMPUS WORKERS.”

Lanette Smith, a cashier at Norris University Center, said in a UNITE HERE Local 1 report that her current salary has made it difficult to support her children.

“I have been stuck near the bottom of the pay scale for my entire 11 years working for various food service companies at Northwestern,” Smith said. “I have never had the chance to move up and make more money.”