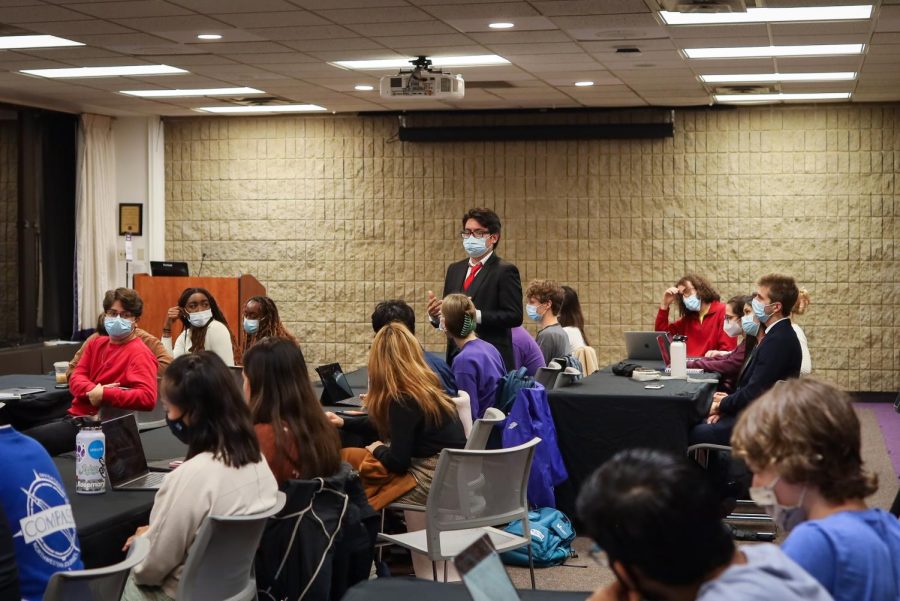 Associated Student Government senators gathered Wednesday night for the first Senate meeting of the quarter — and the first in-person meeting since the pandemic began.

Senators unanimously passed an update to the budget, including cuts to the Evanston Engagement Grant, Student Group Incentives and the Wild Ideas Fund. The update allocated $5,000 in a new grant for student organizers.

ASG also elected five senators to the Rules Committee, in which they will work on updating the codes of conduct and parliamentary procedure. The election was introduced by ASG Parliamentarian and SESP sophomore Leah Ryzenman, who said she wants the senate to adopt rules of order that maintain a civil discourse, but aren’t complex enough to discourage participation or limit who can talk at meetings.

The parliamentary reform is part of a larger-scale effort to make ASG more open, transparent and inviting, according to Ryzenman. She said she’s optimistic for this year, especially now that meetings are held in-person and ASG members are more engaged.

“We have a really great group of senators who really care about making an impact and making the school a better place in all the ways that count,” Ryzenman said.

The Wednesday meeting was the first for Weinberg freshman Abhi Nimmagadda. The in-person format felt more comfortable and real due to physical proximity to other senators, he said.

Though his work has yet to begin, Nimmagadda said he’s eager to advocate for certain individuals on campus, especially queer and low income students, by putting his ideas into action through legislation.

“The potential to make change on campus in very real ways is exciting,” Nimmagadda said.

The first step in that reform process? Changing the parliamentary rules that govern meetings. Like Ryzenman, Jost said he was very optimistic about this year’s senate.

“We can already see the engagement level is so much higher. People are really excited to be here, and they’re excited to get to work on some of the things they campaigned on,” Jost said. “I’m just looking forward to seeing them bring some of those goals to fruition.”