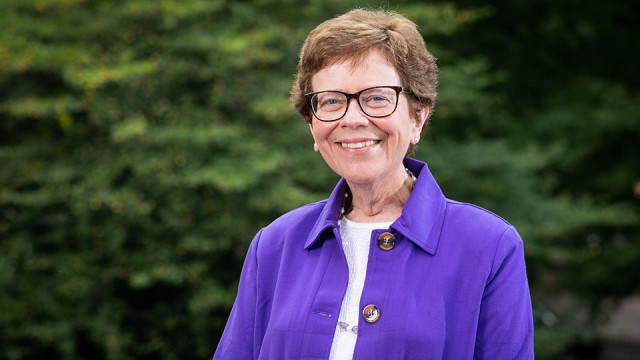 Who is University President-elect Rebecca Blank, and what experience will she bring to Northwestern?

As University leaders laud her appointment, some community members have expressed concerns about her relationships with activists and marginalized communities as UW-Madison’s key leader. Here are five things to know about the University’s president-elect.

Blank’s appointment follows a steadily rising trend of women serving as University presidents. In 2016, only 30% percent of University presidents nationwide were women, according to a survey conducted by the American Council on Education. But the Council, a non-profit higher education association, predicts University presidents will achieve gender parity by 2030. She will serve at the same time as Kathleen Hagerty, NU’s first woman provost.

This isn’t the first time Blank has broken into a male-dominated profession. She was also the second tenured woman in NU’s economics department, where she was employed from 1989 to 1999. Just 22% of tenured and tenure-track faculty in economics are women, according to a survey the American Economic Association conducted last year.

Blank has been chancellor of the University of Wisconsin–Madison for eight years. As chancellor, she led several initiatives to improve educational outcomes and equity at UW-Madison.

Most notably, Blank led the implementation of Bucky’s Tuition Promise, which guarantees free tuition to Wisconsin-resident students whose household adjusted gross income is $60,000 or less. More than 4,000 Wisconsin students are attending the University with zero tuition and fees, according to a news release from UW-Madison.

During a time of urgent funding needs, Blank also led a capital campaign that raised more than $4 billion for the institution. She helped lead the Raimey-Noland Campaign, which included funding for scholarships that increase the diversity of the student body, the recruitment and retention of a more diverse faculty, and research that addresses issues of social and racial justice.

Blank launched the Target of Opportunity Program, a faculty diversity initiative, in 2018, giving additional support to the recruitment of prospective faculty members from historically underrepresented groups.

U.S. News and World Report ranked UW-Madison 41st when Blank started as chancellor in 2013 and 42nd in 2021. UW-Madison’s four- and six-year graduation rates are at their highest ever, and applications to the University have doubled in the past ten years.

Blank also worked as a senior fellow at the Brookings Institute, the dean of the Gerald R. Ford School of Public Policy at University of Michigan and a professor of economics and public affairs at Princeton University.

Student activists have criticized her response to racism and policing

In September 2020, UW-Madison’s student government voted ‘no-confidence’ in the University’s police force. According to student activists at the institution, Blank responded that she hadn’t heard any specific complaints about UW-Madison police.

Following the announcement that Blank would be the next president of NU, several people tweeted about negative experiences with the Chancellor surrounding issues of social justice. “My deepest condolences to all students of color at Northwestern,” one user wrote. Blank “was often silent when it came to issues surrounding racism in the institution,” wrote another.

In a private email obtained by The College Fix, Blank also expressed frustration with a member of UW-Madison’s student government.

“Our student government leader is particularly oppositional this year, and has been difficult to work with collaboratively,” Blank wrote. “This creates a lot of problems, since student government is an important group for communicating with students.”

She has expressed mixed views about removing campus landmarks

In 2020, UW-Madison students called for the removal of an on-campus Abraham Lincoln statue on their campus. According to a student petition, one of the statue’s primary donors frequently published articles instigating violence against Black people, and Lincoln ordered the execution of 38 Dakota men in 1862.

Blank opposed the statue’s removal and released a statement arguing that Lincoln’s legacy should be both celebrated and critiqued. A Letter to the Editor published in the Badger Herald also said Blank minimized the impact of the execution in a meeting with student leaders, reportedly saying Lincoln “could have killed more than he did.”

NU has had similar controversies. In March 2020, the Board of Trustees said it would not reconsider its decision to keep University founder John Evans’ name on the John Evans Alumni Center. A 2014 University of Denver study deemed Evans “deeply culpable” in the Sand Creek Massacre, which killed about 150 Cheyenne and Arapaho people.

In August 2021, however, Blank approved the removal of a rock from campus that was referred to in a 1925 newspaper article with a nickname that included the n-word.

“Creating a more inclusive environment in our universities and our society is a difficult task, but a critical one in our contentious, polarized times,” Blank wrote in a statement. “Progress is made incrementally, with real — not performative — change.”

Clarification: This story has been updated to reflect that Rebecca Blank is the second woman to be granted tenure in Northwestern’s economics department, not the first. Read The Daily’s full fact check here.

— Faculty, students react to search committee for next University president