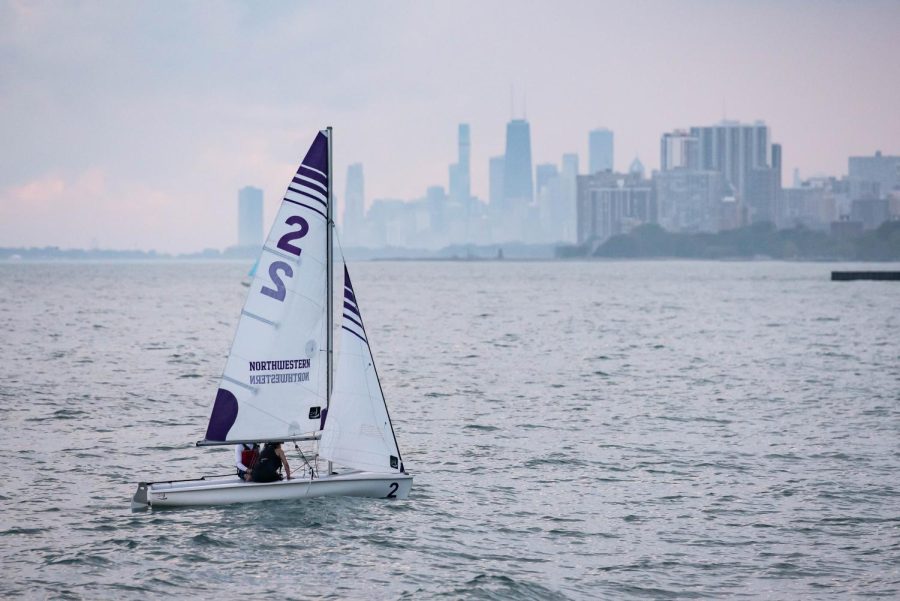 A sailboat floats on Lake Michigan. After over a year, Northwestern’s sailing team is competing at regattas again, and members are hopeful for the upcoming season.

This fall, Northwestern’s sailing team is riding winds of change.

The group was sidelined by COVID-19 for about a year, unable to meet in person or practice on Lake Michigan again until this spring. Now, as the team welcomes a slew of new members and returns to compete in regattas, things are looking up.

The team’s commodore, SESP senior Leah Schulman, said the ability to attend competitions with teams from other schools across the country has significantly raised the spirits of the group.

“It’s been really encouraging, because it’s been hard to keep morale up (during the pandemic), obviously, just wondering what we’re doing it all for,” Schulman said.

Schulman said competition is a huge motivator for her and many others on the team. She believes it gives the team’s weekly practices a greater sense of purpose, since in the spring, with no regattas at which to perform, members were only practicing for themselves.

The presence of new membership has also lifted spirits, according to co-captain Lillian Nemeth. The Weinberg senior said this was the team’s first quarter since the start of the pandemic doing a full-scale recruitment, and she’s grateful to be accepting more students into the sailing community again.

“It’s like you just get 20 new friends every year,” Nemeth said.

The team had a capacity limit at spring practices. Weinberg senior Will Davies, a former captain, said his main hope for this academic year is that the team can return to a full practice and regatta schedule.

One of the team’s main goals is to be competitive,Davies said. The members aren’t quite back in their old groove yet, but they’re getting closer — and in any case, the group is about more than just performing well at practice and regattas, he added.

“You want to bring as many people as you can into the community that is sailing as a whole,” Davies said. “We want people to learn and be able to appreciate it the way that we can.”

Davies and Nemeth have both sailed since high school, but that’s not true for the entire team. Nemeth said the group is a mix of experienced sailors and novices.

That combination of varying skill sets makes the sailing team a uniquely suitable place for new members to grow and improve, Nemeth said.

“The beauty of college sailing is that it is an opportunity to make sailing, which is somewhat of a less accessible sport, more accessible,” she said. “Just being able to share that with other people that haven’t been able to get into it before in this setting is so nice.”

Schulman said she’s excited to bring the team to more competitions soon, and she’s especially thrilled to be hosting a regatta at NU next weekend. The events are a great way to get new members engaged with the sailing community, she said, and they give the team an opportunity to measure its prowess against other schools.

But for now, Schulman’s main focus is making this season a great experience for all members of the sailing team.

“We’re a competitive team, but that’s not everything to us,” Schulman said. “The most important thing to me is just that everyone does as much sailing as they can.”

— Women’s Golf: How Northwestern is coping with the pandemic across six time zones

— Men’s tennis: Their season derailed, Northwestern reflects on an unresolved year and looks to the future with cautious optimism