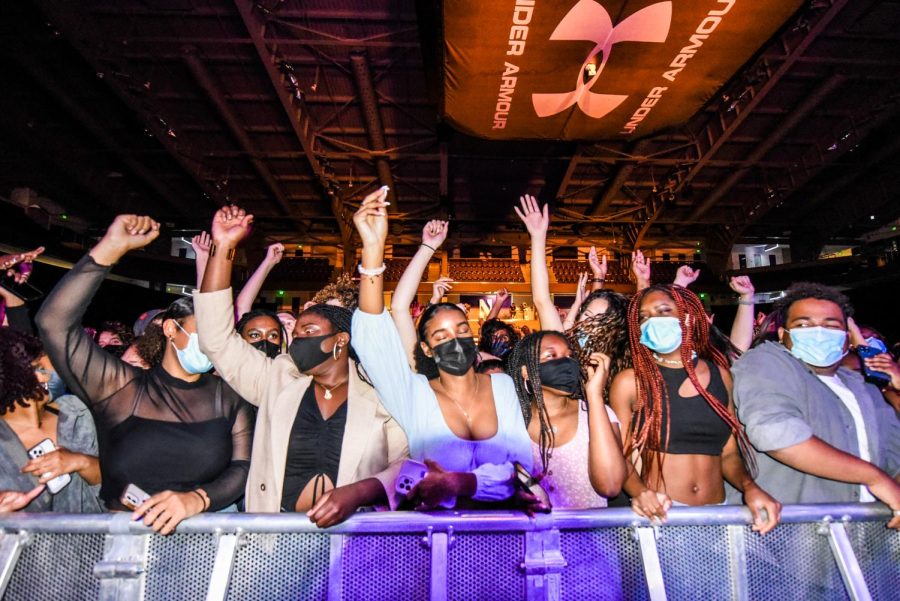 A crowd of students at Saturday night’s A&O Blowout event. The concert was opened by Raveena and headlined by WILLOW.

Northwestern students caught a vibe with WILLOW at Blowout on Saturday night, with Raveena coming for the ride.

With over 2,000 tickets distributed for the sold-out A&O Productions show, students were jumping to the DJ, Moondog, before the opener even started at 8 p.m. Both tickets and transportation to Welsh-Ryan Arena were free for students.

The concert was in such high demand that the ticketing website was down for a few hours, and because demand was so high, many students weren’t able to secure tickets at first. Some students illicitly resold their tickets, leading A&O to release a statement condemning the resale because it went against the organization’s guiding value of accessible programming. Instead, A&O members instituted a Google Form system to facilitate a free ticket swap leading up to the night.

A&O Co-Chair and Medill senior Kubair Chuchra said the organization booked the artists over the summer based on responses from a student survey. After Olivia Rodrigo, WILLOW received the most votes, he said.

“We’ve never really (in recent history) had a rock artist headline a big event, whether at Dillo (Day) or A&O,” Chuchra said. “So it was really cool to see attendance being as high as it was for a rock headliner.”

Raveena Aurora, known mononymously as Raveena, opened the concert, tossing her long black hair around as the crowd screamed to her first live performance in two years. The soft-spoken South Asian artist performed for about 45 minutes, even taking a break in between songs to give an on-the-spot a cappella rendition of “Lovin’ You” by Minnie Riperton.

Weinberg sophomore Meghana Karan, a longtime fan of Raveena, said she loved the energy the Queens native brought to the stage. She was able to get up to the front row and said it was “awesome” to be so close to the artist.

“She was just so peaceful, and I really needed to listen to that. Her music is so therapeutic and relaxing,” Karan said. “It’s really cool to see someone on stage who’s Indian American and does a lot of indie music. She just puts me in a very calm mood.”

Chuchra echoed her sentiments, saying it was “cool to have that representation on the main stage” where South Asian artists are usually not featured.

Following a half hour break after Raveena finished, WILLOW opened her set with “t r a n s p a r e n t s o u l,” playing electric guitar and singing her heart out to a crowd of jumping and screaming students. The 20-year-old artist brought the energy with her, jamming out to her band and hyping up the audience.

Medill sophomore Braedyn Speight, who arrived at the arena at around 7:30 p.m., said she has loved WILLOW since the age of eight and was “freaking out” seeing her in-person.

“No matter where you were in the arena, you had a good view and were super close to her,” Speight said. “She did not disappoint. She gave all of her energy, and you could see it in everyone’s face — everyone was so happy and dancing along even if people didn’t know the words. She did such a great job getting everyone hyped up to be here.”

A&O Co-Director of Marketing and Media Ronit Kitei said A&O was not aware Cole would be performing until the day of the concert.“When we were setting up, we saw he was here and he had a mic, but none of us knew until 2 p.m. the day of,” the Weinberg senior said.

But because Cole is currently a guest on WILLOW’s tour, the artist showed up to Blowout, much to the crowd’s excitement. WILLOW also performed an encore with her signature 2010 song, “Whip My Hair,” adding a rock twist to it.

Ultimately, Kitei said it was powerful to see two queer women of color performing on stage at a high-attendance event.

“For me, as a queer person at Northwestern, it feels really empowering and exciting to be able to see that representation on stage,” she said. “To be able to see people who I’ve looked up to and admired for a while coming to Northwestern and seeing the student body so excited about it was really cool.”

— Jaden Smith and SOPHIE hype up crowd at A&O Blowout