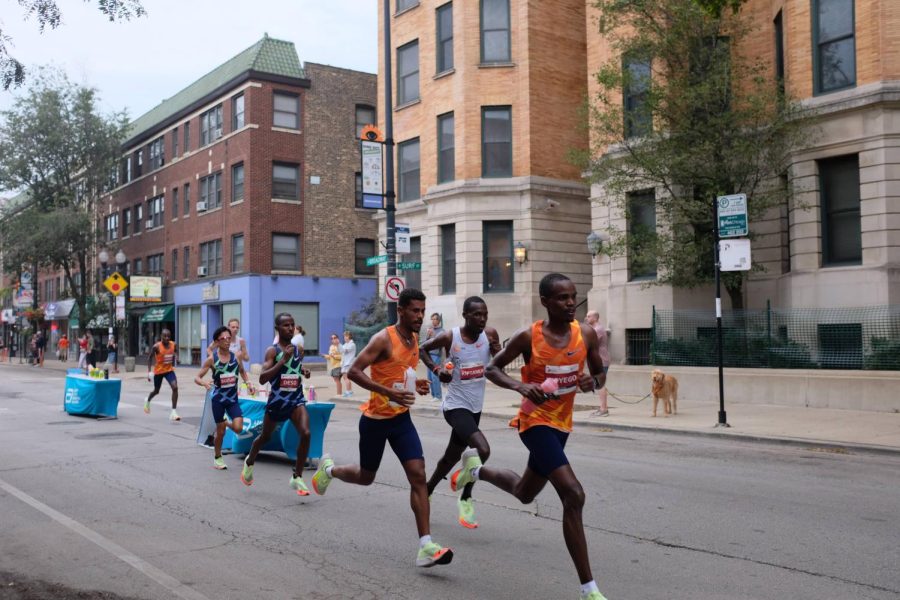 A pack of elite runners emerge as the race leaders, seen here over one third of the way through the competition. Among the group include the top five finishers. Further in the race, Galen Rupp and Seifu Tura Abdiwak battled to finish first, with Abdiwak ultimately triumphing.

Nearly 30,000 runners took their marks Sunday in Grant Park to participate in the Chicago Marathon for the first time since the pandemic began. One Northwestern student, Communication sophomore Maggie Stanton, placed first in the 19 and under age group.

This year, all participants in the Chicago Marathon had to provide proof of vaccination or a recent negative COVID-19 test. Masks were required at indoor venues and recommended for runners while waiting at the starting line.

Despite these modifications, Weinberg freshman Aby James said the marathon seemed more like a race than many of the ones he’s participated in over the last two years.

About 45,000 runners participated in the 2019 marathon. This year, the field was more than 10,000 runners smaller due to the pandemic. Runners hoping to participate in the marathon can gain eligibility in several ways: qualifying with a previous marathon time, raising money for charity or being selected through a lottery.

James said he was unsure whether signing up for the race would be worth the registration fee, but eventually decided to enter the lottery just in case.

McCormick junior Joey Galindo said he planned to participate in the 2020 marathon, which was canceled due to COVID-19. The marathon organizers gave him the option to defer his eligibility to race until 2023. He said he chose 2021 because it would probably be one of the last summers he would have time to train without an internship or other commitment.

Now, 728 days later, he said he was grateful to run alongside a crowd.

“It’s exciting,” Galindo said. “I mean, I love running, but it’s really exciting to be able to do actual marathons and races.”

Sunday’s race was Galindo’s second marathon, after he ran the Holland Haven Marathon in Michigan in 2019. He has plans to continue; he wants to run a marathon in every state and complete the six Abbott World Major Marathons, which includes races in Tokyo, Boston, London, Berlin and New York City in addition to Chicago.

Galindo said he considers himself a “running addict.” Long-distance running has helped him maintain good mental health, he said, especially during school and the COVID-19 pandemic. Marathons are one of his favorite events to compete in.

James said he wanted motivation to continue running beyond high school after the pandemic impacted his last two years of track and cross country. The Chicago Marathon was supposed to be his final race, a way to end his running career on a high note.

But, after deciding to join NU’s track club on a whim, James said the team’s supportive atmosphere made him decide to continue running with them after this Sunday.

“I was kind of scared that they would be too competitive, but I joined and they all seemed like a great group of people and the kind of people I want to be running with,” James said.

Unlike Galindo and James, Stanton chose to run the marathon to raise money for a cause. The charity she chose to support, Shriners Hospital for Children, is a hospital group that specializes in orthopedic care, spinal and burn injuries.

Stanton said she wants to be a pediatric physical therapist, an interest she found in part because of running. She said fundraising for a cause she cares about helped her push through some of her hardest training days.

“I just am really proud of myself for sticking with it and not giving up,” Stanton said.

Stanton’s parents came from New Jersey and her twin brother visited from Notre Dame to watch her run, and she said her friends surprised her with homemade signs at several points along the race.

“I don’t think I could have done it if I didn’t have such a good support system,” Stanton said.

— Students reflect on experience of, motivation behind running in the Chicago Marathon