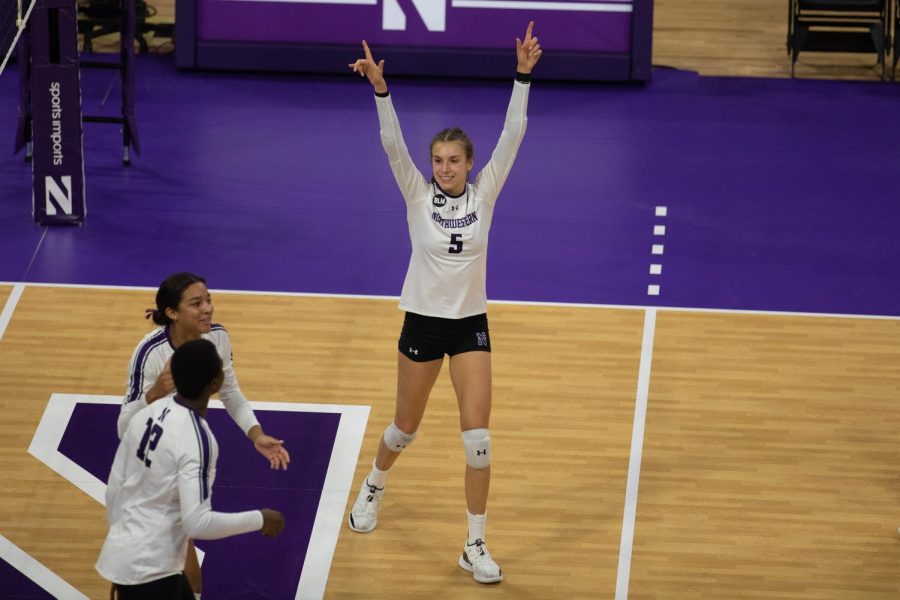 Sophomore setter Alexa Rousseau celebrates a Northwestern point. The Cats are coming off a weekend in which they earned their first Big Ten win and nearly upset a top 10 team.

Sophomore setter Alexa Rousseau’s first year as a member of Northwestern’s volleyball team was a test of endurance.

A third team Under Armour All American from Bloomfield Hills, Michigan, Rousseau’s first fall in Evanston went without volleyball competition after the NCAA moved the season to the spring due to the pandemic. Even when the regular season arrived, COVID-19 concerns wreaked havoc on the Wildcats’ schedule, forcing the cancellations of 12 of NU’s 22 games.

Add in the transition from high school to college, and last year was quite the challenge.

The Cats’ calendar has returned to normalcy. NU (6-9, 1-3 Big Ten) is now 15 games into its regular season without any postponements. Still, the lessons and trials of last spring have left an impact on the squad’s perspective, leaving a more resilient team in its wake.

Developing the Cats’ chemistry with such limited practice reps and frequent interruptions was one of NU’s toughest obstacles. While communication and practice are important to most sports, those aspects are especially crucial in a sport as team-oriented as volleyball, according to coach Shane Davis.

“The more you can play and practice, the better you’re going to be,” Davis said. “Those interruptions in the spring, it was really tough to find any sort of rhythm or groove, especially with our sport.”

The Cats didn’t let any of the scheduling complications derail their season entirely. NU finished with a 4-6 record and couldn’t knock off any of the ranked teams it faced, but won against Iowa and Maryland after each of its COVID-induced breaks.

Despite the inconsistent schedule, Rousseau broke into the Cats’ starting lineup and finished the season as NU’s leader with 260 assists.

The Cats have approached this fall with an appreciation for the sport and a smoother start to the season. The return of fans to arenas has been another welcome addition — Welsh-Ryan Arena had its highest attendance for a Big Ten opener since 2016, when NU took on then-No. 12 Nebraska on Sept. 22.

“We realized that it’s so important that we get a chance to play and we’re able to be together and just step out on the court,” Rousseau said. “We’re giving it 110% because we didn’t get this chance last time.”

Along with the returning members of the 2020-21 team, the Cats’ freshmen have also enjoyed the stability of the schedule after the pandemic upended their final high school years.

“Being able to see everybody every day and having a set season, it’s a lot more reassuring,” freshman libero Ellee Stinson said. “I’m pretty grateful to be here and be able to play in college.”

Up this weekend is an East Coast road trip that includes a Friday matchup against Maryland and a Saturday test against No. 13 Penn State. The Cats are 2-4 on the road this season and lost their lone Big Ten road matchup so far, a five-set defeat to rival Illinois.

With a chance to improve to .500 in conference play, NU will bring the upward trend of last weekend’s success and a week of preparation into its matchups.

“Every little thing that we’re focusing on and working our butts off in practice during that week, we are seeing reflected in matches,” Rousseau said. “We’re just continuously getting closer and closer.”

— Wildcats split weekend matches and almost knock off No. 7 Minnesota

— Northwestern volleyball prepares to host Rutgers, No. 7 Minnesota over weekend