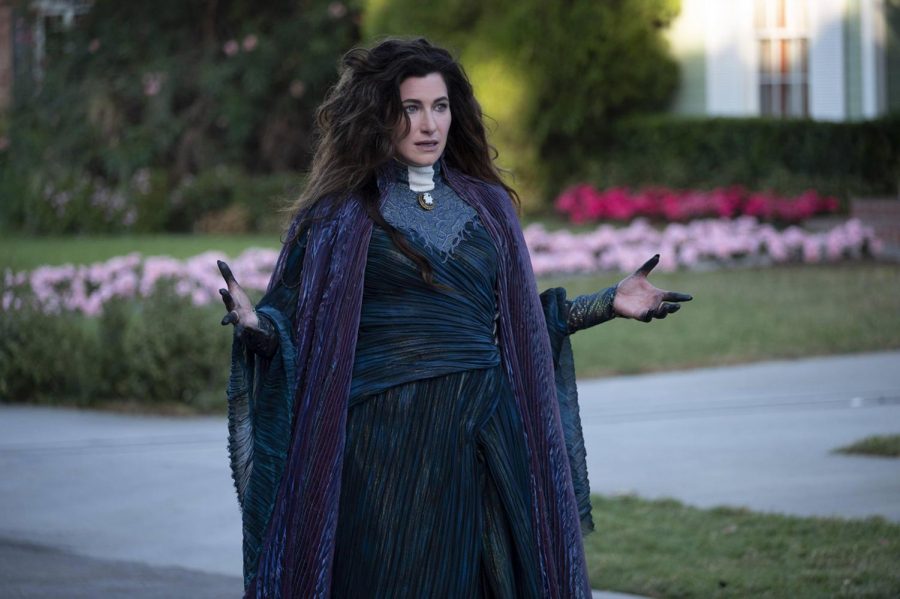 Kathryn Hahn (Communication ‘95) in “WandaVision.” The actress is starring in a new Disney+ spinoff of the show.

As it turns out… it was Agatha all along! And she’s back for more.

NU alumna Kathryn Hahn (Communication ’95), the actor behind the villainous Agatha Harkness, is set to reprise her role in a spinoff series based on the hit Disney+ television series “WandaVision.”

As first reported by Variety, the spinoff from Marvel Studios is already in development. While the specific plot details remain under wraps, the publication described it as a “dark comedy.”

Hahn started out on the show playing the role of Agnes, the nosy neighbor of the titular characters Wanda and Vision, before it was revealed she was in fact Agatha, a powerful witch. In the Marvel comics and the series, Agatha is shown to have survived the Salem Witch Trials and is more than a match for Wanda, also known as Scarlet Witch.

When viewers last saw Agatha in the finale of “WandaVision,” Wanda traps her in the fictional town of Westview by using her powers to forcibly revert her to her Agnes persona.

This new project expands the catalog of upcoming works featuring the actress, as Hahn was recently cast in Rian Johnson’s “Knives Out 2.” She will also star alongside Paul Rudd and Will Ferrell in “The Shrink Next Door,” a dark comedy miniseries streaming exclusively on Apple TV+.

We’re in the “Hahnaissance,” and adoration of Hahn has only continued to grow. The alumna has not only become a series favorite but has also received one Emmy nomination and won two MTV Movie awards for her performance in “WandaVision.”

“What makes you special, your superpower as an artist, is your individuality,” Hahn said to an audience of NU students in an A&O Productions panel last spring. “That acknowledgement is like a fire that can clear the lens through which you see the world as it is, which is key to discovering your own artistic expression.”