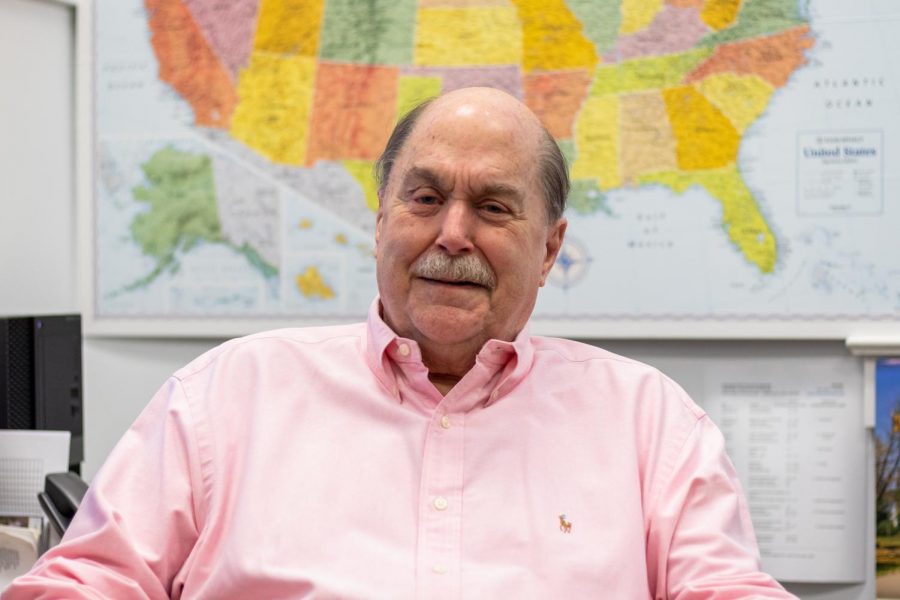 Geography Prof. John Hudson. He is in his 50th year of teaching geography at Northwestern.

Geography Prof. John Hudson is teaching the same geography course this quarter that he taught his first quarter at Northwestern — 50 years ago.

As the University’s only geography professor, Hudson single-handedly runs the adjunct geography major. NU incorporated its geography program into the anthropology department in 1987 after the subject fell out of fashion and several geography faculty left NU. After the department closed, Hudson took it upon himself to keep the geography program running. He teaches five lecture courses every year, with topics ranging from “Chicago and Its Region” to “Principles of Cartography.”

An average of four to five geography majors and one to two minors graduate in each class, Hudson said.

“I’ve been very lucky… to have this small geography program, and I didn’t really need assistance in carrying it out,” he said. “Every year I’d think, ‘Well, I don’t know how long this is gonna last,’ but it has.”

Hudson said he doesn’t know of any geography faculty who have been at the University since before he began in 1971, and he has no immediate plans to retire. When he first started at NU, the University looked and felt very different: students were protesting the Vietnam War, the Lakefill was just “shrubbery” and Weber Arch was nonexistent, he said.

Hudson’s first year at NU was also the year the University established its affirmative action program.

“Every change that I can think of at Northwestern — in the student body, in the faculty — is simply a reflection of how society itself has changed,” Hudson said.

Before coming to NU, Hudson taught at University of California, Berkeley. He received his Ph.D. in geography from The University of Iowa and attended University of Wisconsin–Madison as an undergraduate.

Hudson said he discovered his passion for geography in college and decided he wanted to be a geography professor during the first week of his freshman year.

“I never had the slightest urge to waver from that decision,” he said.

He initially specialized in quantitative geography, using mathematical models to study spatial phenomena. He then moved into historical geography, focusing on settlement, economic and demographic topics in the Great Plains.

No matter the topic, Hudson’s passion for the material and connections with his students shine through. Hudson said he still receives Christmas cards from students he had 50 years ago.

Tiffany Grobelski (Weinberg ’06), a geography professor at Gustavus Adolphus College in St. Peter, Minn., took multiple classes with Hudson and had him as an adviser. She said Hudson is the reason she decided to pursue a career in geography, and he helped her win a Fulbright to study in Poland.

Grobelski said Hudson’s lectures sometimes felt like stand-up routines, and she remembers his class as “kind of a legend.”

“He would show photos and just tell all of these really funny stories about various people and places that he encountered on his travels,” Grobelski said. “It felt partially like you were in someone’s living room.”

The two are still in contact and get lunch together every year at a meeting of the American Association of Geographers. Other students have recounted unique experiences in his classes as well.

Weinberg junior Josh Ezrol has taken three classes with Hudson and plans on majoring in geography. Ezrol said he remembers turning in an assignment for Hudson’s class at midnight and getting feedback on it before 11 a.m. the next day — the fastest grading he’d ever received from a professor.

“I’m thinking, ‘There’s no way he actually read 60 papers, graded them and put them in Canvas within 11 hours, eight of which he was probably asleep for,’” Ezrol said. “But then I read the comments and he had actually given me feedback on what I wrote. He commented on a joke I made.”

Hudson said it’s been a pleasure to teach at NU for 50 years. While the student body has changed over the years, he said NU students have consistently been rewarding to get to know.

Hudson was a Guggenheim Fellow during the 1988-89 academic year, the only time during his 50-year career at NU that he’s taken leave. Despite the opportunity, he said he missed the University so much that he came to campus during most of his time off.

“If you have a Guggenheim, you’re supposed to go on leave for heaven’s sake, but I really didn’t want to,” Hudson said. “I never tried to be gone for too long.”

— Vakil: Northwestern should mandate a geography course for all students

— This is the Wildcat GeoGame’s last quarter — for real, this time