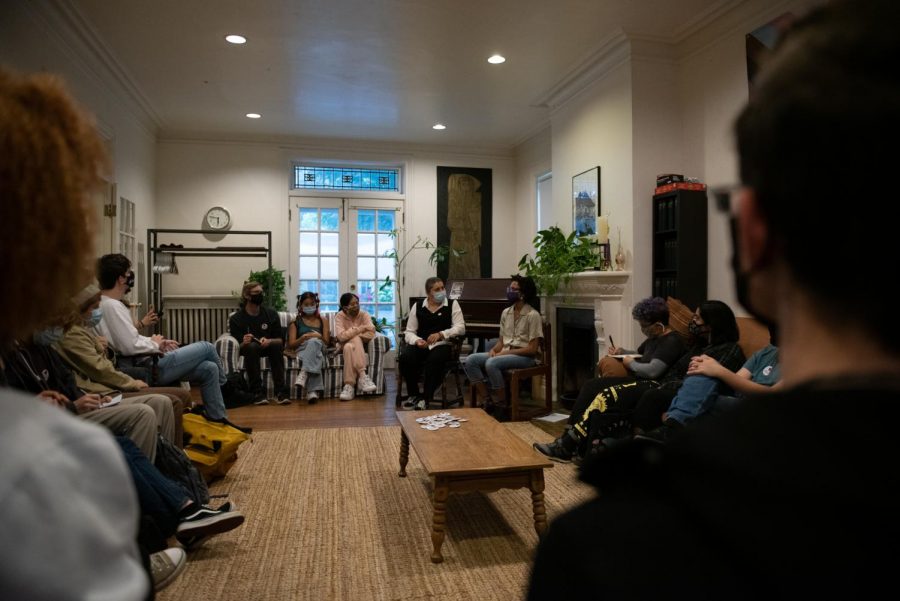 About 35 students gather in the University Christian Ministry and listen to Valentina Espinosa share her story after 17 years working at Northwestern. According to Espinosa, a strike is increasingly likely as the union’s demands go unheard by Compass Group.

She is a single mother of a daughter who uses hearing aids and is in therapy, neither of which Medicaid covers. She makes $14.76 per hour. The health conditions Medicaid does cover will also vanish once her daughter turns 18, and Espinosa does not receive health insurance through Compass.

In a Tuesday town hall hosted by University Christian Ministry and co-sponsored by Students Organizing for Labor Rights, Espinosa, one of many unionized workers, shared her story to an audience of 35 students.

Workers met for negotiations with Compass earlier in the day, after the company pulled out of its first agreed date the previous Friday. The employees, represented by UNITE HERE Local 1, continued to pressure Compass for a variety of workers’ rights, including a living wage of $19.88 and guaranteed health insurance, Espinosa said. Almost two weeks earlier, 95% of workers authorized a strike as a strategy should Compass continue failing to meet their needs.

As negotiations continue, Espinosa said the prospect of a picket line becomes more and more material, and almost inevitable, especially as the workers feel they are not gaining traction with Compass.

“(Espinosa) also wants to thank us for the support that we’ve given so far,” a student translating for Espinosa said. “She’s almost certain that ultimately they will have to strike.”

In addition to workers losing their wages and risking their employment status, students might also be directly impacted by a strike. SOLR member and SESP junior Neva Legallet is concerned that the University may not reimburse students should campus dining options close during a strike.

However, Espinosa emphasized that she and the other workers care deeply about the students, and that simple gestures like greeting employees and asking about their day shows valued support.

“When you’re going to dining halls, telling workers that you’re on their side and you support them is so important,” Legallet said.

The ministry partnered with SOLR and UNITE HERE Local 1 when the workers voted to strike, offering to support them by hosting gatherings because their building is not technically on University grounds.

Town hall moderator Jordan Muhammad said while the ministry is an explicitly Christian organization, its support of labor rights is an example of bridging gaps between special-interest groups on campus.

“We need to be a community and we need to be engaged, especially in issues that really matter to everyone,” the Communication sophomore said. “I do hope that other organizations can see their subjects and roles as porous, especially to issues that are so important.”

Espinosa said the actions and dedication of the students are pivotal to achieving long-overdue needs for the campus worker community. In her closing statements, she thanked those in the crowd for their attendance, and shared how hard it was to recount her personal experience.

“(Achieving our goals is) very important for this because we have to set down measures for the company: we are strong,” Espinosa said. “We are people. We are human beings that need more.”