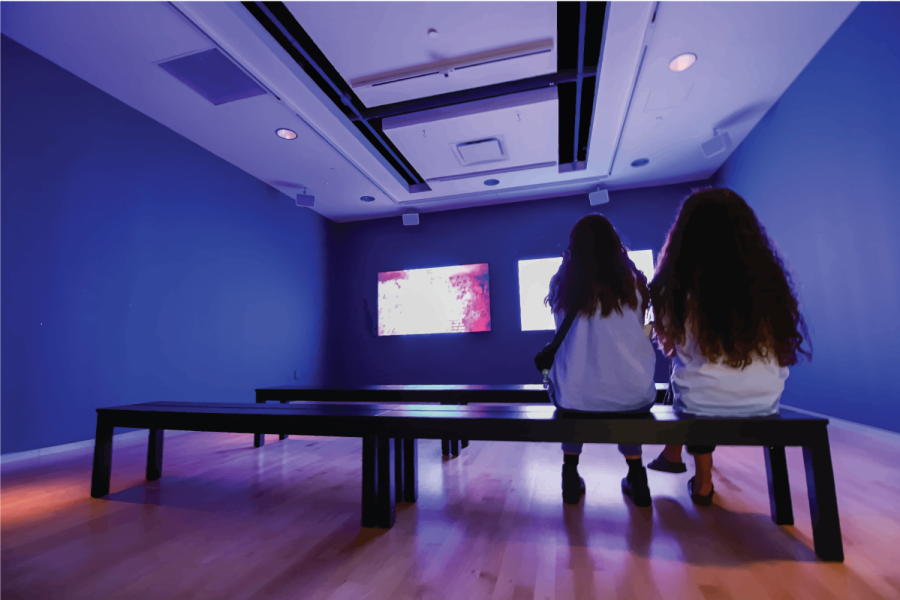 Artist Sky Hopinka, a member of the Ho-Chunk Nation and a descendant of the Pechanga Band of Luiseño Indians, wanted to find a way to weave together the history of his family and the discrimination they faced into an artistic project.

“I wanted to make a piece about the origins of the boarding school system in the United States and the people who were prisoners there,” Hopinka said.

So, the artist put together a two-part video installation, which is currently on display at The Block Museum. The exhibition, called “Cloudless Blue Egress of Summer,” highlights Indigenous resistance and reckons with colonialism through the history of the country’s oldest fort, Fort Marion. The immersive thirteen-minute installation will be at The Block until Dec. 5 as part of the “Thinking about History with The Block’s Collection” initiative, marking the museum’s 40th anniversary.

Hopinka has had his work featured in various festivals and exhibitions including Sundance Film Festival, Ann Arbor Film Festival and the imagineNATIVE Film + Media Arts Festival. He currently serves as the assistant professor in film production at Simon Fraser University in Vancouver. “Cloudless Blue Egress of Summer” was a commission in St. Augustine, Fla., he said.

Fort Marion, now known as Castillo de San Marcos, was a prison for Indigenous peoples during the Seminole Wars in the 19th century. Prison supervisor Richard Henry Pratt designed techniques to force the captives to assimilate and become “Americanized,” according to the exhibition website. The prison held Cheyenne, Kiowa, Comanche, Arapaho and Caddo Indian captives.

“The U.S. boarding school system that grew out of these experiments imposed a regime of compulsory assimilation on generations of Indigenous children, a practice of cultural genocide that intentionally divided families and deprived communities of their linguistic and cultural heritage,” the website reads.

Hopinka took his own footage of the fort, combined with historical drawings from the prisoners, in “Cloudless Blue Egress of Summer.” The artist said it was important to him to tell the story of the Indigenous prisoners, though it took a lot of research and time to shoot the footage.

Michael Metzger, the exhibition’s curator, said he wanted to focus on “ways art can approach questions about history” through this exhibition and its accompanying exhibition, “Who Says, Who Shows, What Counts.” Metzger said he met Hopinka when he was a visiting artist at Northwestern in 2018 and knew immediately that he wanted to feature the artist’s work at The Block.

“I immediately recognized the relevance of this work to not only the historical theme driving our acquisition program at that point, but also how it presented many different opportunities that relate to our teaching mission as an institution,” Metzger said.

Metzger said although the initial plans were to install the exhibition in fall 2020, the timing was delayed due to COVID-19. But, he said, the installation “couldn’t have come at a more opportune time” because of the country’s reckoning with colonial violence.

Because the exhibition has only been open for about two weeks, Metzger said he is excited to hear visitors’ feedback on the exhibition.

“We’ve seen over the last several months, particularly in Canada, reckoning with the boarding school system with the discoveries that have been made,” Metzger said. “Sky’s work really addresses many of these questions and themes, and it’s a really powerful moment to be presenting this at The Block and to be creating these conversations.”

Metzger said he is also excited to screen Hopinka’s feature film in November at The Block, which he said provides a counterpoint to “Cloudless Blue Egress of Summer.”

Ultimately, Hopinka said he hopes viewers of the exhibition will interpret his art in whatever way they choose.

“There’s a number of things an audience could get out of it, so I’ll leave that up to them to decide,” Hopinka said. “(The title) comes from a line of a poem I wrote called ‘Perfidia,’ which relates to colonial history and Indigenous memory and being present in spite of those traumas, or maybe because of them.”