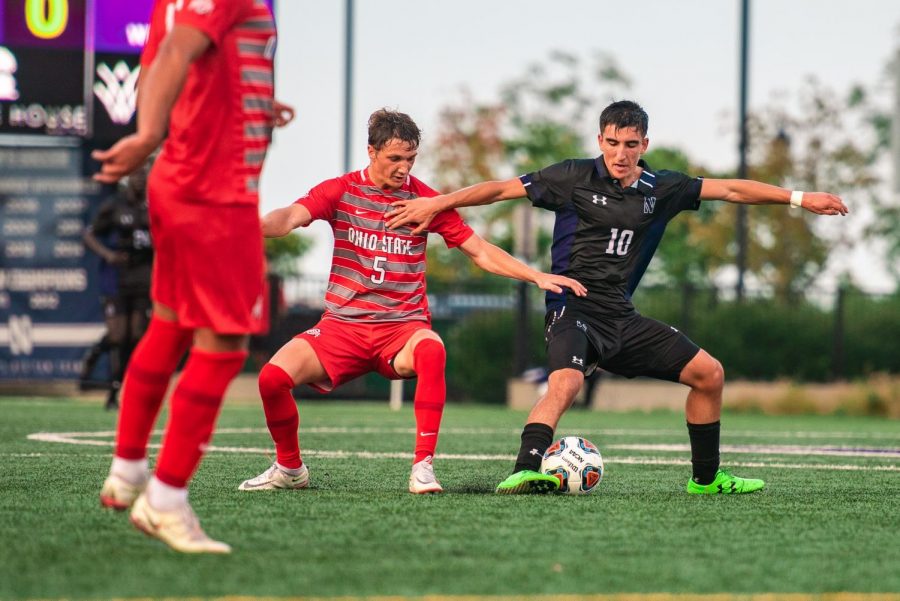 Junior midfielder Vicente Castro fights for ball and position against Ohio State defender. Northwestern picked up its first conference win of the season versus the Buckeyes, 1-0.

Northwestern and Ohio State found themselves stuck at 0-0 for most of Sunday’s rainy match. With a strong defensive battle on both sides of the ball, the game stayed scoreless until sophomore forward Justin Weiss broke the tie in the 85th minute.

The sophomore received the pass from senior forward Jose Del Valle and then made the most of the opportunity. Weiss’ bottom left kick cleared OSU’s goalie Keagan McLaughlin’s dive, giving Weiss his fifth goal of the season. He now has the most points (12) in the Big Ten and is tied for first in goals.

“It’s a whole team effort,” Weiss said. “It started from the defensive pressure, to Jose touching the ball forward, seeing me through, playing me a beautifully weighted ball. I just had to do the easy job and put it in the back of the net.”

The late goal was too much for Ohio State to overcome, awarding NU (4-5-2, 1-3-0 Big Ten) its second straight victory and first Big Ten win under coach Russell Payne this season.

OSU doubled its shots in period two, finishing with 18 to NU’s six. But even after tripling the Cats’ count, the Buckeyes couldn’t capitalize on their looks.

“A big thing coach (Payne) stresses to us is that it is a 90-minute game,” Weiss said. “If you stay consistent throughout the game and finish the chances you need, it doesn’t matter how many shots the other team has. It matters who puts the ball in the back of the net.”

Losing the shot battle has been a recurring theme for the Cats’ all year, as opponents have outshot NU in nine of 11 matches this season. However, the Cats have found a way to win four of those 11 matches — a testament to the team’s ability to play with strong, consistent defense.

On top of not allowing a single goal in this match, Miskovic captured six saves in the contest, one shy of his career-best. Miskovic is tied for second in the Big Ten with his shutout record (three) and has given up the third least goals in the conference (seven).

“It was great to step up for the guys,” Miskovic said. “They did the work up top and we were able to get the win. It’s one game we won today, and we will focus on Maryland.”

Heading back on the road, the Cats will travel to College Park to face on Friday what coach Payne called a “high-powered offense.” The Terrapins enter with one of the best attack units in the conference, ranking second in the Big Ten for goals (16) and taking the most shots with 145.

With Maryland standing at the top of the conference with a 7-2-1 record, NU will have its hands full dealing with the Terrapins’ electric offense. However, the defense isn’t as sturdy as the squad’s offense, averaging the least amount of saves per game (2.73) in the conference.

“If we can limit the gifts we give at times and make teams really beat us in those moments, then we’ll be in games,” Payne said. “The guys are getting used to believing that we step across the white line to win every game.”