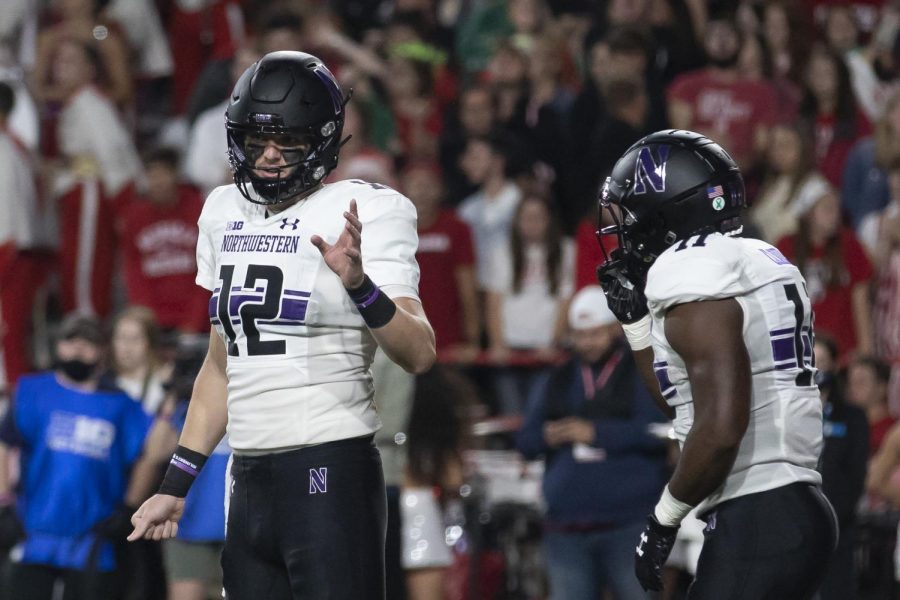 LINCOLN, NE. — When analyzing Northwestern’s first two losses of the 2021 season, early-game struggles are one of the culprits.

On the first play of the season opener against Michigan State, running back Kenneth Walker III sprinted 75 yards for a touchdown, the spark in a 38-21 win by the Spartans. Two weeks later against Duke, the Wildcats fell behind by 27 points in the second quarter and gave up 420 yards of offense in the first half.

Following the defeat to the Blue Devils, coach Pat Fitzgerald was direct: If NU falls behind on the road, it cannot “expect to win consistently.”

At Memorial Stadium, that is exactly what happened in a 56-7 loss to Nebraska.

“We’ve kind of been a little bit like Jekyll and Hyde,” coach Pat Fitzgerald said. “We started fast on a couple (of) games and we haven’t on others. We’ve got to get that consistently fixed to be a consistent winning team.”

On its first four drives, the Cornhuskers (3-3, 1-2 Big Ten) had at least one play of 25 yards or longer, including receptions of 70 and 28, and a rush for 64. 11 minutes into the Big Ten West contest, Nebraska led by three touchdowns and racked up 246 yards by the end of the first quarter.

Meanwhile, the Cats (2-3, 0-2 Big Ten) combined for zero yards on the first two possessions. On the ensuing drive, they scored their only touchdown of the evening — a 28-yard pass from sophomore quarterback Ryan Hilinski to graduate wide receiver Stephon Robinson Jr. — and had another chance to respond from the Cornhuskers’ one-yard line.

However, a miscommunication between Hilinski and sophomore running back Evan Hull led to a fumble and no points to show for an eight play, 65-yard drive. That was the last time NU would get close to Nebraska’s red zone. Meanwhile, the Cornhuskers would finish with 664 yards — the most given up in Fitzgerald’s tenure — and score the third-most points allowed under the Cats’ 16th-year head coach.

During the week, Fitzgerald said NU prepared for a split flow option play run by Nebraska, but that the Cornhuskers ran it differently Saturday night. This change, as well as the ground game plan rolled out by Nebraska offensive coordinator Matt Lubick, allowed the Cats’ Big Ten West opponent to take control of the game early on.

Martinez is one of the best option quarterbacks in college football, and that was on display in Lincoln. He notched three straight touchdowns and used his elusiveness to set up big plays early on like his 70-yard heave to wide receiver Samori Toure on the game’s opening play. His performance in the opening minutes also opened up the offense for teammates like running back Jaquez Yant — whose 64-yard sprint set up Martinez’s second score. Yant finished as the game’s leading ball carrier with 13 carries for 127 yards.

Rushing opportunities enabled Nebraska to average 10.3 yards per play in the first quarter, and then eight in the second. They finished the first half with 405 total yards; 241 of those came on the ground.

“We just got to look at ourselves and we got to be ready to just hit people in the mouth,” junior cornerback A.J. Hampton, Jr. said. “It’s football. Big plays are going to happen. But you gotta learn how to rebound and think about the next one and not let it get caught up in your head and linger over into the next drive.”

As the Cornhuskers garnered 35 points after 30 minutes, a key reason for their success was stifling NU’s rushing attack. After running for 373 yards last week against Ohio, the Cats’ had -2 yards at halftime before garnering just 35 more over the next half hour.

The second half saw the Cornhuskers add three more scores, including an 83-yard rushing touchdown from wide receiver Zavier Betts. By then, the game seemed out of reach for the Cats.

Leaving Lincoln with its worst loss to Nebraska since it joined the Big Ten in 2011, NU faces questions ahead of its bye week. Some of them pertain to how to take control in the opening minutes of games.

Fitzgerald believes that seizing offensive opportunities and preventing self-inflicting wounds can make the difference. Fixing issues on defense seems feasible as well, since the Cats have given up 21, 30 and 35 points in the first half in their three losses.

But for now, the plan for Rutgers is simple.

“You don’t point fingers,” Fitzgerald said. “You just stick together. You work your tail off together and you come back fighting and find a way to go 1-0.”