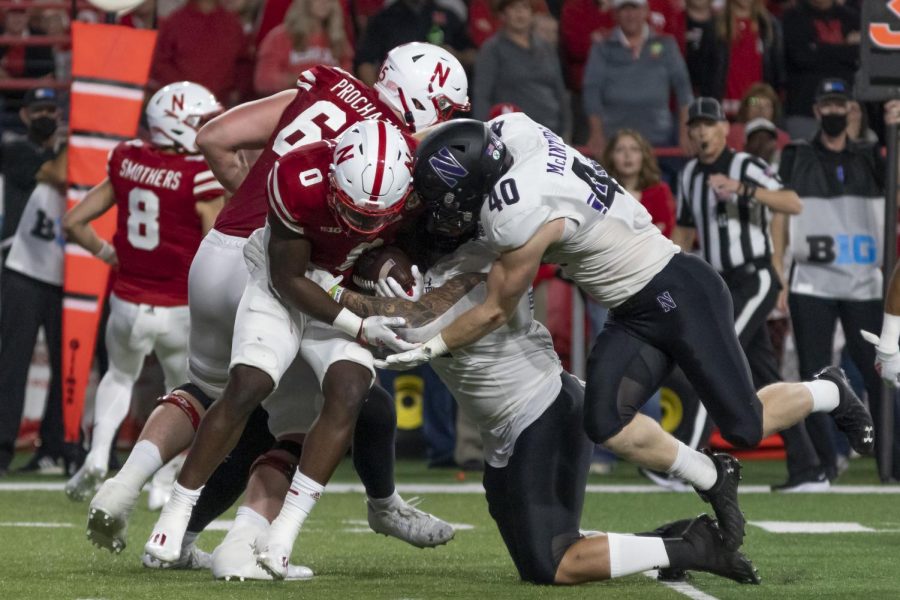 Peter McIntyre attempts to reel in a tackle. Nebraska ran for 434 yards in its 56-7 win over Northwestern.

Against Nebraska Saturday evening, Northwestern rushed for 37 yards. The Wildcats allowed the Cornhuskers to rush for 434.

The Cornhuskers’ gaudy totals, taken together, spelled out a defensive disaster without peer in coach Pat Fitzgerald’s 16-year tenure as the Cats’ head coach. NU’s 56-7 loss represented a suboptimal start to divisional play and left the Cats searching for answers.

“The first thing we need to do when we all get home tonight is to take a look in the mirror,” junior cornerback AJ Hampton said after recording a team-high five solo tackles. “[You need to] look at yourself in the mirror, saying ‘What could I have done to win this rep?’”

A game eerily similar in character to NU’s season-opening loss to Michigan State gradually unfolded. In that game, the Spartans also punched the Cats in the mouth on the game’s first scrimmage play as running back Kenneth Walker III broke off a 75-yard touchdown run. Its opponents’ robust performances on the ground, however, are what truly sealed NU’s fate in both games.

“That’s two teams that have really tried a major attack on our boundary,” Fitzgerald said of the Cats’ first and most recent opponents. “We gotta get some things shored up, because we should be able to have enough hats over there.”

Cornhuskers coach Scott Frost — once a national championship-winning option quarterback at Nebraska under the legendary Tom Osborne — repeatedly dialed up option plays with his college coach in attendance. Martinez’s penchant for pitching the ball kept NU’s defense on its toes and paved the way for the quarterback to rack up 57 rushing yards and three touchdowns.

Meanwhile, a sterling showing from the Cornhuskers’ offensive line opened holes for running back Jaquez Yant, who rolled up 127 yards on just 13 carries, and wide receiver Zavier Betts, whose only carry resulted in an 83-yard rushing touchdown. Only two Cats — graduate student defensive lineman Samdup Miller and senior linebacker Peter McIntyre — recorded a tackle for loss.

“It starts with us as coaches,” Fitzgerald said. “We thought we knew exactly what they were doing, but obviously we didn’t do a good enough job coaching it, and teaching it, and adjusting it in game to be able to take away the triple option to the boundary.”

Hampton, who played in that loss two seasons ago, stressed that a positive, introspective approach would benefit the Cats’ defense as it enters a bye week and looks ahead to a showdown with an improved Rutgers team.

“Bringing all that negativity in, that’s not something you need to do,” he said. “You point your finger at yourself first, and see what you can get corrected. Then you go talk to your teammates in a nice way, because all that negativity just brings the team down from the inside. That’s one of the first and most important things we gotta do.