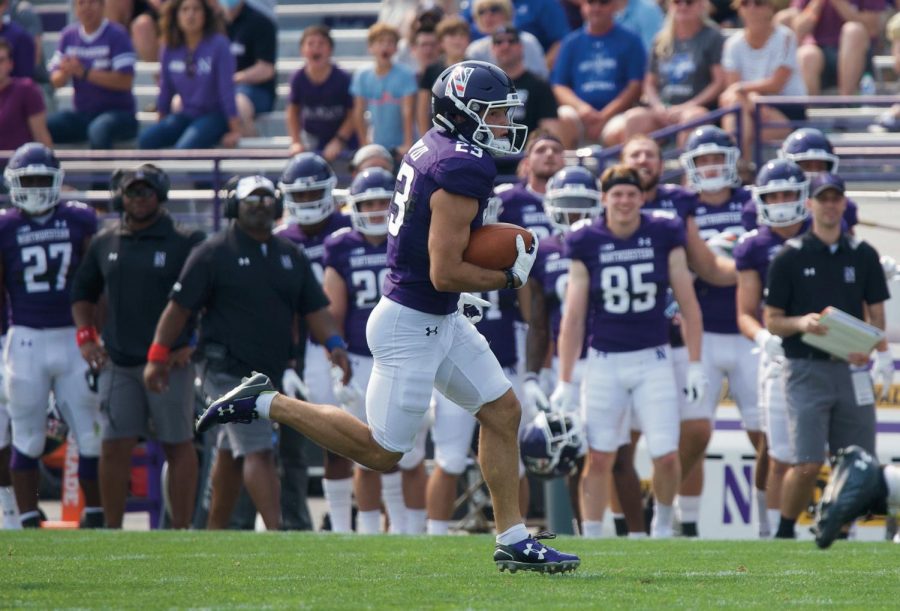 After dominating most of a 23-20 loss to No. 17 Michigan State last week, Nebraska doomed itself by conceding a game-tying fourth-quarter punt return touchdown.

The Cornhuskers’ entire blocking unit converged on the right side of the field to defend the punt return. But the punter’s kick went left, leaving Michigan State wide receiver Jayden Reed unguarded. Reed easily sprinted into the endzone untouched for the score, and Nebraska fell to the Spartans in overtime.

Four weeks into the season, Northwestern is the top punt return team in the Big Ten, averaging 23.1 yards per return. The return game will be an important factor in how well the Wildcats (2-2, 0-1 Big Ten) perform in Lincoln against Nebraska (2-3, 0-2 Big Ten).

“We feel very positive about our returners, all three of them,” special teams coordinator Jeff Genyk said. “All the guys blocking, they understand their game plan really well. They really executed, finished their blocks to give us an opportunity. We also have been strategic in making sure that we handle the ball really well and give it to our offense at the end of the play.”

Almost all of NU’s punt return yards have come from an explosive four return, 166-yard performance against Indiana State. However, the Cats do have at least one return of more than ten yards in each game this season.

Nebraska has only faced three punt return attempts this season, two of which went for under ten yards. But the third was the 62-yard return that was the Cornhuskers’ “death blow” against the Spartans.

“That was one that will stick with you,” Nebraska special teams coordinator Mike Dawson said. “That’s the ultimate one I’ve ever seen.”

Joseph returned punts in just one game against Indiana State after Kirtz suffered an injury, and he racked up 111 return yards on his two returns. Meanwhile, Niro III has fielded four punts for an average of 17 yards, and Kirtz has returned two for an average of 13 yards.

“Joseph has amazing ball skills and really good vision,” said Genyk. “He can see down the field 20, 30, 40 yards to set up blocks. Kirtz is really amazing catching the ball, and he has really good speed to the outside, and (Niro III) is just very tenacious once he gets the ball. He’s very difficult to bring down.”

While Joseph hasn’t gotten many special teams reps on the field since the Indiana State game, his explosiveness and big play ability could be a unique asset against a Nebraska squad struggling on special teams.

Despite its explosive returns, NU has yet to score a punt return touchdown and the Cats failed to score any points after Joseph’s two big returns against the Sycamores, despite promising field position. As a result, Niro III said his goal for the return unit this season is to eventually “take it to the house.”

Niro III and Genyk credited much of the punt return unit’s success to the blockers in front of them and the commitment of the entire special teams unit. Niro III added the scout team brings new energy and physicality to its practices, pushing the return units to their full potential.

“Every guy embraces their role, whether they’re front-line on the kickoff, or blocking for the guys on the punt return,” Niro III said. “Those guys have great energy, physical, embracing the role that they got.”

—  Football: After offensive success against Ohio, Northwestern prepares for test of Nebraska’s defense

— Football: Northwestern returns to Big Ten action against Nebraska on the road