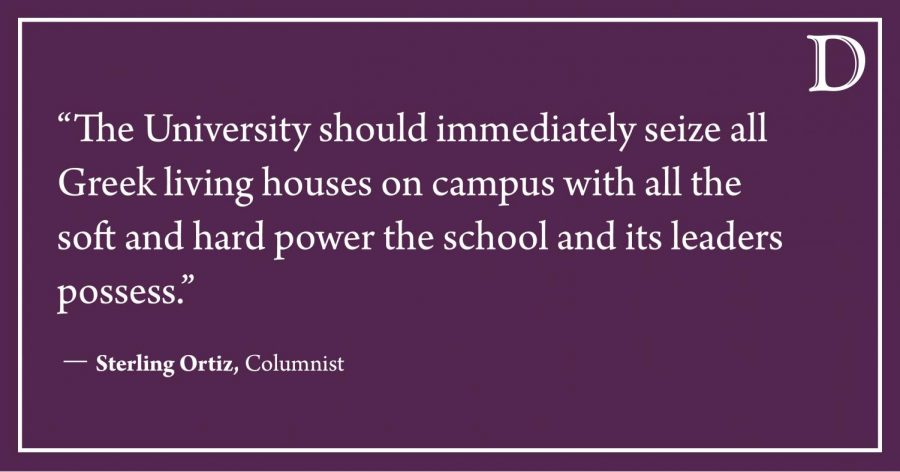 I firmly believe having a Greek living space is a privilege that no council nor chapter can manage. I came to this conclusion in my fourth year at Northwestern after seeing the campus as an unaffiliated student, then as a rank-and-file member of my Latino-founded multicultural fraternity, and now as a leader in my community.

The University should immediately seize all Greek living houses on campus with all the soft and hard power the school and its leaders possess. I also strongly believe that NU should negotiate with Sigma Alpha Epsilon to vacate its headquarters at the Levere Memorial Temple, which lies mere feet away from the Evanston Campus.

When I woke up on Sept. 25, I felt dread when I read reports of alleged druggings at the Alpha Epsilon Pi fraternity house. I never bought that every Interfraternity Council chapter had changed practices in response to the Abolish Greek Life movement last year, or in response to the hundreds of stories shared on the @abolishnugreeklife Instagram account. However, in my grace, I wrongly believed that all chapters had enough respect not to resume endangering their guests as soon as campus opened again. This isn’t the first time I was wrong.

The next day, I woke up to a flurry of tweets and another crime notice, this one about an alleged drugging at the SAE fraternity house.

We see year after year that neither IFC nor PHA deserves this unique housing power. Both councils keep their houses exclusive, using rightful University land to segregate their members and friends from the student body. I can speak firsthand to this exclusivity, from my personal experience and others’ experiences I know, where I went to North Campus looking for a fun and safe party, as a bright-eyed freshman, but the doormen turned me back without a special text. Meanwhile, predators allegedly get pats on the back and safe passage through those foreboding doors. How is this privilege fair?

If the immediate seizure is impossible, NU should negotiate with national chapter representatives to cancel housing contracts and their charter renewals.

I emphasize national chapters in this opinion because they have a lot more power than non-Greeks realize. Let me use Chi Omega at Northwestern as an example. That sorority wanted to disband in late Summer 2020, but was blocked by its national organization. The Chi Omega nationals — these people who trumpet far-right Republican Senator Marsha Blackburn (R-Tennessee) as a proud alumna — let disagreeing activists deletter, and continued Chi Omega as a shell of the past. Other IFC and PHA chapters share similar realities, such as the resurrected and formerly elitist sorority Delta Delta Delta.

I believe Greek life at NU can work and can do great things, like every other organization on campus. As a future option, I support individual buildings for councils that are open to the public, where their members can gather and the walls are lined with their great histories. For Greek life to work, however, we need equality before the law. No more making deals for chapters to come back early from expulsion, like SAE did. No more slow action responding to students’ pain. IFC pausing events until Oct. 17 is an alright first step, as are their interim restrictions against both SAE and AEPi, which the Daily reports IFC President Nick Papandreou as saying are the “strictest restrictions IFC can impose on a chapter at this time.” Getting to equality under the law is a marathon, one whose end should include equality in housing, for all Greeks and non-Greeks.

I want our readers to imagine a campus where the University repurposes IFC and PHA housing for public use. These houses, sitting in the core of campus, are an example of prime real estate that should be used for service to the wider NU community, not for needless partitions. Some conversions are already in effect, such as Gamma Phi Beta and Sigma Nu’s houses, so we know this idea is possible.

I imagine a campus where non-White and non-Black students are not canned like sardines into the Multicultural Center, and instead, we have separate houses for students who identify with different races and ethnicities. We can even have affinity housing spaces, so Black students can live with Black students if they want, fulfilling one of the Bursar’s Office Takeover demands. Imagine a building dedicated to Indigenous people, where NU tells the truth about John Evans’ evil deeds and celebrates the Council of Three Fires, the Ojibwe, Potawatomi and Odawa. Finally, I imagine the University creating dorms even larger and more beautiful than 560 Lincoln St. for students to live in, so upperclassmen don’t have to fight to the death for $800 per month rooms on Garnett Place. Again, this is a step, and I am excited to see the marathon.

A better world is possible, and we must go and create it. I believe that a better world includes seizing all Greek living spaces for better uses.

Sterling Ortiz is a SESP fourth-year. You can contact him at [email protected]. If you would like to respond publicly to this op-ed, send a Letter to the Editor to [email protected]. The views expressed in this piece do not necessarily reflect the views of all staff members of The Daily Northwestern.