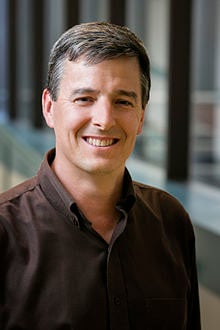 John Rogers. The McCormick Prof. received the 2021 Order of Lincoln for his bioengineering work.

McCormick Prof. John Rogers is one of eight Lincoln Laureates to receive the 2021 Order of Lincoln, Illinois’ highest honor for professional and public service achievements.

His technologies, which are designed to bend with the human body, include an implant that supplies electrical stimulation to premature babies’ nerves and a skin-like sticker that monitors babies’ vital signs in neonatal intensive care units. In partnership with the Bill & Melinda Gates Foundation, Rogers’ team deployed thousands of these devices to hospitals in Ghana, India, Kenya and Zambia.

Rogers said he is honored to represent Northwestern with the award in a University news release.

“As a Texan who has now spent most of his adult life in Illinois, I have developed a profound appreciation for the unique culture and talented people of the state, political home of one of our nation’s greatest presidents,” Rogers said in the release.

“Hard work, innovation and determination have long been the foundation of our communities,” Gov. J.B. Pritzker said about Rogers and his colleagues in the release. “The eight recipients of the Order of Lincoln have exhibited all that and more.”