Andres: An anthemic song could take Northwestern football games to the next level 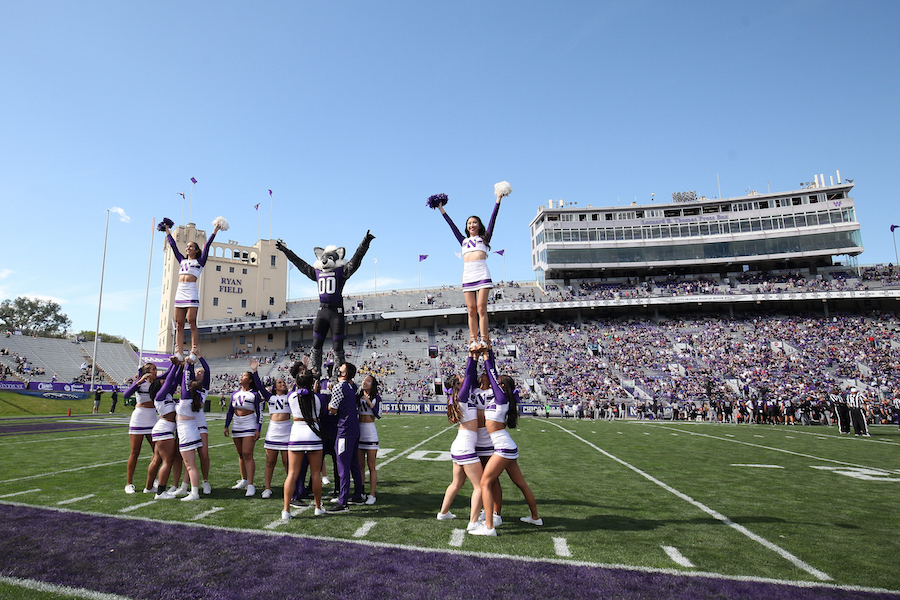 Every Saturday this fall, I have heard football fans singing. After a year away from stadiums due to COVID-19, college football fans seem to be in competition this fall: Who can flaunt their team’s sing-along song the most effectively?

You’ve seen it on television, and maybe even in person. Wisconsin has its press-box-shaking rendition of House of Pain’s “Jump Around” at the end of the third quarter. Michigan has a 107,000-person rendition of The Killers’ “Mr. Brightside.” Oregon has Otis Day and the Knights’ version of “Shout,” Florida has Tom Petty’s “I Won’t Back Down” and West Virginia has John Denver’s “Take Me Home, Country Roads.”

To borrow from The Cranberries: everybody else is doing it, so why can’t we? Ryan Field may hardly be a Big House or a Swamp, but a stadium singalong song could give Northwestern a fun new niche in the college football universe.

There are a few natural in-house candidates. The Who’s timeless “Baba O’Riley” amps up the crowd right before the team’s entrance. Metallica’s “For Whom the Bell Tolls” is already ubiquitous on Saturdays and plays into our learned image by making the world’s loudest Ernest Hemingway reference. And who can forget the marching band’s loving renditions of Fountains of Wayne’s power-pop classic “Stacy’s Mom?”

But I want to think completely outside the box here. Before we get into the new candidates, let’s review the rules of selecting such a song.

It has to be big. It’s a stadium singalong for a reason, after all. Sorry, slowcore fans.

It has to be anthemic. We’re looking for the kind of song people will softly sing to themselves for hours afterward as they scatter about the North Shore. This presumably eliminates all shoegaze and post-rock candidates.

It should have some kind of local connection. It’s not a requirement, but helps. For instance, Oregon uses “Shout” because “National Lampoon’s Animal House” was filmed on its campus. Florida uses “I Won’t Back Down” because Petty is from Gainesville, Florida, and Michigan uses “Mr. Brightside” because of the Wolverines’ and The Killers’ shared tendency to coast on their mid-2000s success (okay, I made that last one up).

Keeping these rules in mind, here is a countdown of five songs I believe are in prime position to serve as the Wildcats’ singalong song.

There is something darkly ironic about pulling a potential singalong song for NU football from an album entitled “Mellon Collie and the Infinite Sadness.” Nevertheless, “Tonight, Tonight” has everything: shockingly discernible lyrics for a ‘90s alt-rock song, the accompaniment of the Chicago Symphony Orchestra, reference to “your city by the lake” and the fact that it dropped during the 1995 season. All we need now are regular night games.

It’s hard to go wrong with a stone-cold classic from one of Chicago’s most beloved musical groups. “Let’s Groove” has a wonderfully weird, quasi-robotic intro. And, as anyone who has attended a wedding in the U.S. in the last 40 years can attest, has one of the most danceable beats of its day.

Arcade Fire guitarist Will Butler was still an NU student when his band released “Funeral” to rave reviews in September 2004, making this track unique among our contenders for its direct connection to the Cats. “Wake Up” remains a hallmark of the mid-2000s indie craze, and the melodrama of its giant, wordless chorus lends itself well to sports: “Now that I’m older / My heart’s colder.” Is there any better summation of life in the Big Ten West?

We’re reaching way back to a touchstone of the early soul era. Few Chicago-based musicians have affected the national music scene the way Cooke did during his short life, when he churned out lighthearted and poignant hits alike. “Wonderful World” is pure, collegiate joy, and its verses (“Don’t know much about history / Don’t know much biology,” repeated numerous times with different disciplines) double as self-deprecating humor any overworked NU student can appreciate.

We could go a few different John Hughes routes here. The Beatles’ version of “Twist and Shout,” immortalized by “Ferris Bueller’s Day Off,” looms as low-hanging fruit. We could opt for Wayne Newton’s rendition of “Danke Schoen” from the same film. But let’s be honest — there’s only one song from a Hughes film that could take this slot. It is the beating heart of “The Breakfast Club,” an aspirational, unforgettable (pun intended) new wave anthem that speaks to the peaks and valleys of life at NU: the mystique of Chicago and its suburbs, the perils of leaving home, the excitement of growing up. “Don’t You (Forget About Me)” may be nearly four decades old, but it will never sound dated.

Imagine a frigid, gray November day in the near future, at a new Ryan Field. A ranked Wisconsin team and a ranked NU team are slugging it out before a sold-out, purple-saturated crowd on national television. The Badgers are deep in Wildcats territory as the third quarter draws to a close. Forty-seven thousand, one hundred thirty people draw to an uneasy silence. And then: “Hey! Hey! Hey! Hey!”

It won’t be “Jump Around,” but it doesn’t need to be. NU’s home-field advantage will have a novel, exhilarating dimension — properly memorable, indelibly Chicagoan and indisputably great.