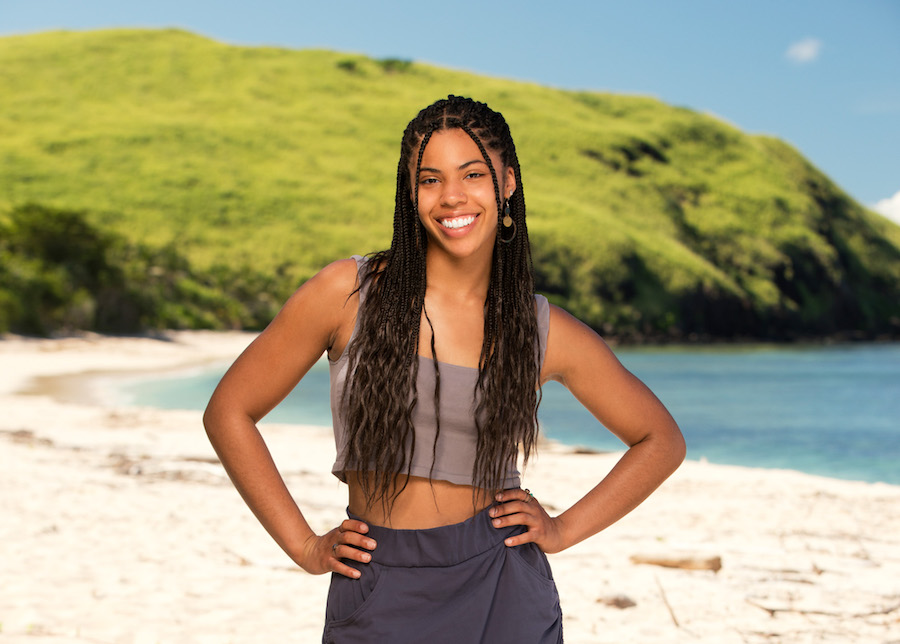 Liana Wallace. The Evanston resident is on the newest season of the CBS show, “Survivor.”

After a COVID-19 hiatus, the hit CBS show “Survivor” has returned, this time with a familiar face for Evanston residents.

Twenty-year-old Liana Wallace, an Evanston native and student at Georgetown University, has joined the cast of “Survivor” Season 41. The show follows a group of marooned individuals competing in challenges and obstacles who are progressively eliminated until the last one remains as the “Sole Survivor.”

Wallace said she has watched “Survivor” for years with her family.

“One day after bathtime, my mom sat me and my brothers down in front of the TV to watch ‘Survivor,’ and it just stuck. Watching ‘Survivor’ after bathtime became our routine,” Wallace said. “It’s something I have been able to look forward to throughout my life, every Wednesday night.”

It was during one of these nights that Wallace and her family learned that casting applications were open. She said she has always wanted to apply to be on the show, but her mom convinced her that now was the time.

After all of the uncertainty of the pandemic, Wallace’s mom told her she had nothing to lose, so she immediately recorded an audition and sent it in with low expectations. Wallace had no idea that her “dream ever since (she) was a little girl would come true,” she said.

“I have always said at some point in my life I was going to apply to be on the show,” she said. “I figured after a year like 2020, I needed to center joy, and pursuing one of my biggest dreams would allow me to do just that.”

Wallace’s appearance on the show has meant a lot to many in the Evanston and Northwestern communities. Weinberg sophomore Jane Clarke, social chair of Willard Residential College, organized a watch party on the premiere night for all residents of the residential college.

“I was really excited to watch Season 41 this year because it was the first season I was watching live,” Clarke said. “Over the summer, I saw that one of the cast members is from Evanston, which is also very exciting.”

Clarke said she thought the watch party would be a good way to bring people together and get invested in the cast members.

Although Wallace did not have a lot of screen time during the first episode, Clarke said the audience at Willard was excited to see someone from Evanston on the show.

“When we were watching last Wednesday night, whenever she would come on the screen, we would all say, ‘Oh my gosh, that’s the person from Evanston.’ It felt really cool to have a connection with someone on the show,” Clarke said. “It’ll be really fun to watch her throughout the show and get to root for somebody who’s local and who you have a connection to.”

Echoing her sentiments, Weinberg sophomore Liz O’Brien said she was excited to see an Evanston native in the season premiere when she watched it.

O’Brien said she has been watching “Survivor” for eight years, something that became a family tradition.

“I originally started watching it because my mom and brother were big fans, and I got hooked,” O’Brien said. “The challenges are what originally hooked me because I found them fun and exciting to watch, but after I got older and realized what was actually happening, I really got into the whole strategy involved.”

Some characteristics of this season were altered, like how the players were given a lack of supplies at the beginning. O’Brien said she is excited to see how the players modify their strategies.

When she saw Wallace in the first episode, O’Brien said she was “pretty impressed” with her strategy and alliance with another player. She said she thinks Wallace will be able to make it far in the show.

Ultimately, Wallace said she hopes her appearance on the show will inspire and uplift other women of color who watch “Survivor.”

“Too often, women of color are tasked with caring for other people and rarely centering our own hopes, dreams, and aspirations. I hope that people who watch me on the show see a woman of color, a 20-year-old, a student who decided to center her dreams,” Wallace said. “If I can inspire even just one little Black girl, that would mean everything to me.”

— A mid-season discussion of “Survivor: Winners at War”